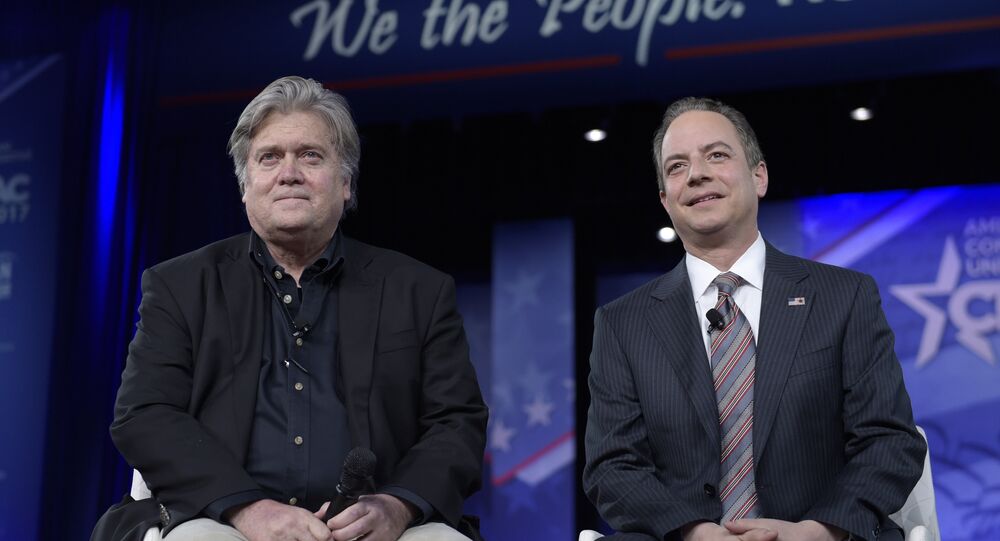 Bannon: ‘Corporatist, Globalist’ Media Won’t Give Nation Back Without Fight

US President Donald Trump’s top advisers Reince Priebus and Steve Bannon presented a united front at the Conservative Political Action Conference (CPAC) on Thursday, aiming to show unity within the Republican party despite reports of a divide between the two in the White House.

© AP Photo / Marcio José Sánchez
Facebook Funds Conservative CPAC Conference in Washington – Report
Bannon, Trump’s chief strategist, also took direct aim at the “corporatist, globalist” media, who he asserted “will not give you your country back without a fight.”

“It’s not going to get better — it’s going to get worse every day,” Bannon said of the media, adding that the press is “adamantly opposed to an economic nationalist agenda like Donald Trump has.”

The polarizing right-wing hardliner also blamed the media, which he referred to as the opposition party, for claims of division within the Trump administration.

“Look at the opposition party, how they portrayed the campaign, how they’ve portrayed the transition and now the administration. It is always wrong,” Bannon claimed. “If you remember, the campaign was the most chaotic by the media’s description, most disorganized, most unprofessional, had no idea what they were doing. Then you saw them all crying and weeping [on Election Night].”

© AP Photo / Ric Feld,File
Trump to CNN: 'You Are Fake News'
Priebus took a slightly softer tone toward the media, but called their claims of division “ridiculous.”

Bannon drew big cheers from the crowd after lauding Trump’s immediate squashing of the Trans-Pacific Partnership as "one of the most pivotal moments in American history,” and executive orders to act on his campaign promises regarding immigration.

“It was Donald Trump that was able to bring this party and this movement together,” Priebus said. “And Steve and I know that, and we live it every day, our job is to get the agenda of President Trump through the door and on pen and paper.”

Intelligence Heads Say No Evidence of Collusion with Russia - Priebus

Nothing Wrong in Flynn's Contacts With Russian Envoy - Priebus