Keith Ellison is holding the lead in the race to become the new Democratic National Committee chair, and has responded to a tweet from Donald Trump, in which the President praised Ellison’s foresight about Trump’s win.

In July 2015, Ellison told a disbelieving panel in an interview on ABC's "This Week,” that Trump had the momentum and that he believed that there would be a good chance he would win the Republican nomination.

On Wednesday, Trump tweeted about that exchange.

"One thing I will say about Rep. Keith Ellison, in his fight to lead the DNC, is that he was the one who predicted early that I would win!" Trump tweeted.

Ellison promptly responded to the President’s tweet, saying, “my latest call? America is coming together like never before; we'll stop your drive to divide us. #libertyjustice4all.”

Members of the DNC will travel to Atlanta over the weekend to vote for the person who will replace the party’s disgraced chairwoman Debbie Wasserman Schultz.

According to a survey conducted by The Hill, Ellison is currently the favorite to win, over former Labor Secretary Tom Perez. The news website identified the stances of 240 members of the DNC, either through public endorsements or through private responses. There are 447 voting members, and either candidate would need to score 224 to win. If neither candidate reaches the threshold, the votes will continue into multiple rounds, as many as it takes, until a majority is reached. 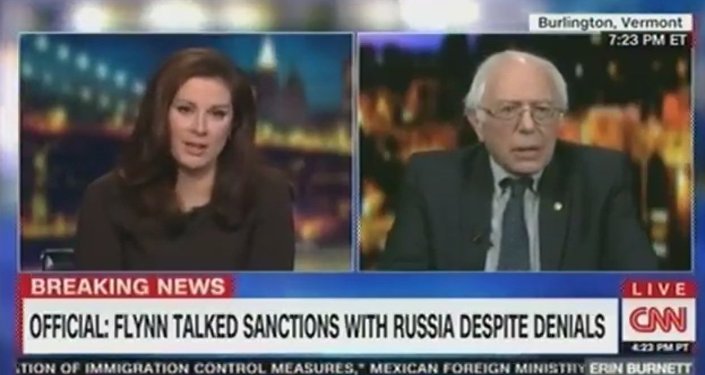 “Out of those who responded, Ellison leads with 105 supporters to Perez’s 57. The remaining major candidates have less than a dozen supporters each, while more than 50 DNC members remain undecided,” the Hill reports.

Bernie Sanders, the popular Democratic presidential candidate who many suggest was cheated out of the party nomination during the primaries, has gone all in for Ellison. Wasserman Schultz had been forced to resign as DNC chair after emails released by WikiLeaks revealed her plotting against Sanders, sparking a massive outcry.

“I hope you will do everything that you can to help elect Keith Ellison as the next chair,” Sanders said at a forum on Sunday sponsored by the Los Angeles Times. “He understands as I do that what we need to do is create a grass-roots party — that we need millions of people in that party having the courage to take on the billionaire class, and mobilize the American people to stand up and fight back in a way that we have not seen in the recent history of this country.”