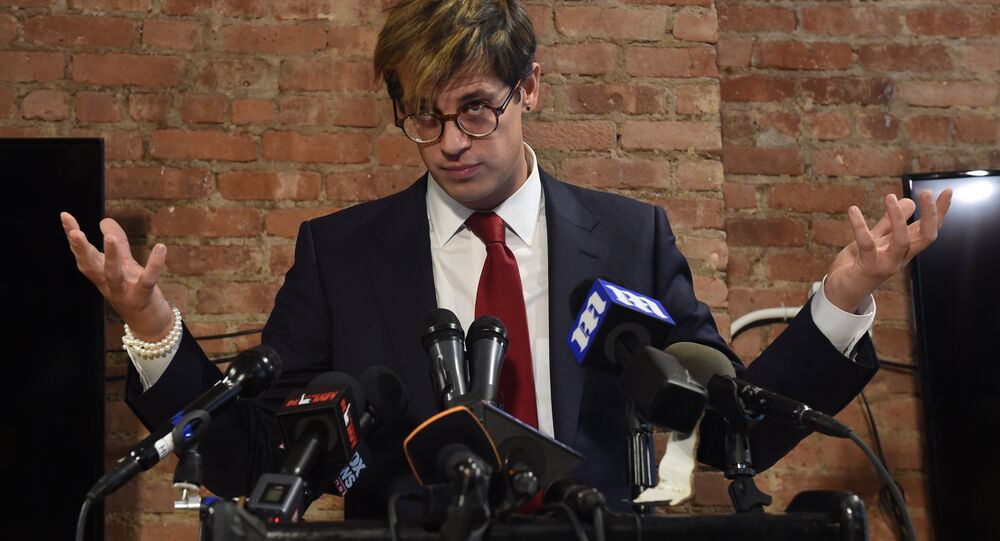 Right-wing political commentator Milo Yiannopoulos has resigned from Breitbart News, following a video in which the UK-born tech editor, who claims to have been a victim of child sexual abuse, appears to condone sexual relationships between men and younger boys.

The video surfaced shortly after it was announced that Yiannopoulos would be speaking at the right-wing Conservative Political Action Committee (CPAC) conference. The conference organizers immediately faced backlash from the ultra neo-conservative wing of the party.

Soon after, the Twitter account for a new website called the Reagan Battalion began posting portions of a podcast interview in which Yiannopoulos makes his inflammatory statements.

“This arbitrary and oppressive idea of consent which totally destroys, you know the understanding of many of us have the complexities and subtleties and complicated nature of many relationships,” Milo says in the recording. “You know people are messy and complex and actually, in the homosexual world particularly. Some of those relationships between younger boys and older men, that sort of coming of age relationships.The relationships with those with older men have helped those young boys discover who they are. And give them security and safety, provide them with love and reliable and sort of a rock. Where they can’t speak to their parents.”

Yiannopoulos joked that the reason he “gives such good head,” is due to being molested by a priest during his childhood.

"The high adjustment group revealed a greater tendency to engage in four types of cognitive strategies: disclosing and discussing CSA, minimization, positive reframing, and refusing to dwell on the experience,” the study authors found.

© REUTERS / Joshua Roberts
Violent Protests Interrupt Conservative Comedian’s Speech, Trump Weighs In (VIDEO)
What was edited out of the interview was Yiannopoulos stating that he agrees with the legal age of consent, and thinks that they are “about right.” Additional context missing from these statements also makes clear that the pundit was speaking of a relationship he had with a 29-year-old man when he was 17. The legal age of consent in the UK, where Yiannopoulos is from, is 16.

The video saw Yiannopoulos disinvited from CPAC, and resulted in his book publisher dropping a deal.

In a Tuesday news conference in New York City, Yiannopoulos announced that he would leave Breitbart to create his own media outlet.

“I'll be around for 30 years, people who try to take me down won't be,” Yiannopoulos told reporters.

During the news conference, Yiannopoulos stressed that it had been painful for him to be accused of a crime of which he himself was a victim. He also pointed to his reporting, which has exposed three pedophiles, one of whom is set to appear in court this year. He repeatedly stressed that he does not condone or tolerate pedophilia.

“This week, for political gain, the media and the Republican establishment accused a child abuse victim of enabling child abuse. It's sick. But they have not killed me. They have only made me stronger,” Yiannopoulos wrote in a statement. “Thank you for the support. You guys have kept me sane. In a few months, this will be a distant memory. I'll be back with details of my new publisher, my new media venture and my new tour.”

Supporters of Yiannopoulos maintain that the release of the video was part of a smear campaign by figures who are upset about the former-Breitbart editor’s growing influence.

“Notice how there was no moral outrage about these year-old comments until the Neo-cons started to get cut out of paid speaking engagements,” Yiannopoulos’ YouTube manager, who does not wish to be named, told Sputnik News. “Milo shouldn't have said what he did, but this is a coordinated attack from a desperate Republican establishment. If you think they actually give a s--- about child abuse victims, you've been fooled.”

Alex Marlow, editor-in-chief at Breitbart, called the release of the video a coordinated attack during the outlet’s daily radio show on Tuesday, also stating that Yiannopoulos’ comments were “indefensible” and “appalling.”

“There seems to be growing evidence that this was all coordinated to wait for a peak moment when Milo was red-hot,” Marlow said. “They sat on this story and they held it for maximum political damage.”

Yiannopoulos made international headlines earlier this month after a riot took place on the University of California campus in Berkeley, purportedly  in protest of his planned speech.

The rioters, wearing ski masks and all-black attire from head to toe, launched fireworks and molotov cocktails at police, caused an estimated $100,000 in damage to the MLK Student Union at the university, and toppled a mobile light structure — setting its generator on fire. The city estimates that the rioters caused between $400,000-$500,000 in damage to areas outside the university.

A militant far-left group called By Any Means Necessary (BAMN) has claimed involvement in the riot, saying that they were one of the “organizers of Berkeley’s shutdown of white neo-fascist Milo Yiannopoulos.” In 2005, the group was identified by the FBI as "thought to be involved in terrorist activities."

Several people were physically attacked  by Yiannopoulos’ detractors, some hospitalized with serious injuries,.