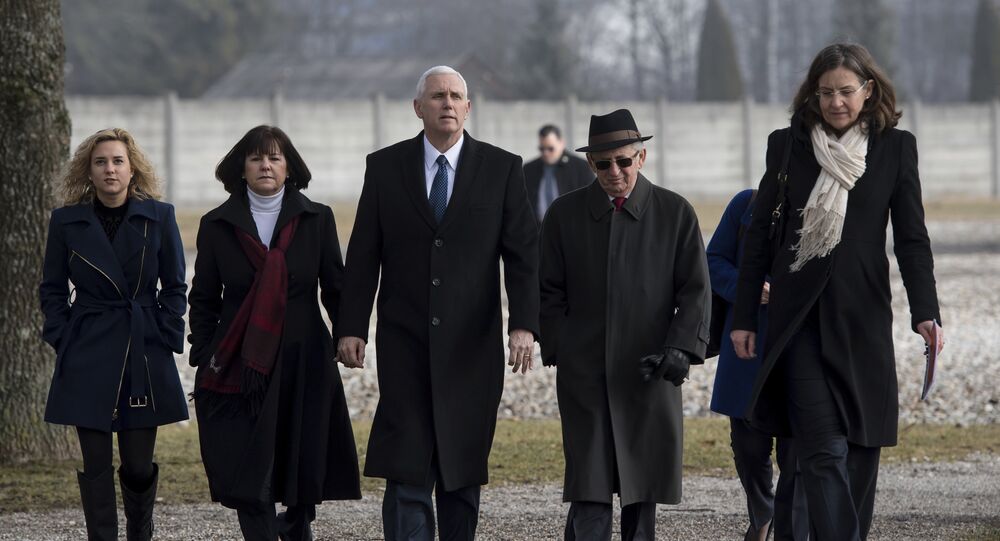 US President Mike Pence visited the site of the Dachau concentration camp in Germany February 19, during his first overseas trip as vice president, even as the administration he serves continues to be dogged by accusations of anti-Semitism.

Pence toured the grounds of the former camp established near Munich in 1933 with his wife and daughter, as well as with Abban Naor, a survivor of the camp, and other dignitaries, AP reports. More than 40,000 prisoners died at the site during World War II before the camp was liberated in 1945.

Pence was in Germany to address diplomats and defense officials at the Munich Security Conference February 18, and to meet with world leaders. He's not the first US vice president to visit the camp — Joe Biden also visited during a trio to Germany in 2015. But he may be the first to take the time to memorialize the victims of the Holocaust while dodging suggestions that his boss is fostering white nationalism.

Only days before visiting the camp, the latest flare up had come, this time at a press conference, when US President Donald Trump, mishearing or perhaps flatly not listening to a question about a rise in attacks on Jewish institutions in the US, dismissed his inquisitor by simply saying, "I am the least anti-Semitic person that you've ever seen in your entire life," and refusing to even listen to, let alone answer, the question.

In the same week, he answered another question about anti-Semitism in the US by bragging about his electoral college victory.

The White House also came under attack for the Holocaust memorial statement it issued last month that managed not to mention Jews at all.

And of course, we mustn't forget Steve Bannon, White House adviser and campaign chief strategies, whose website, Breitbart, became a platform for right-wing nationalists and their racist and xenophobic fellow travelers and who has long been accused of anti-Semitism himself.

It is Bannon — and the glee white nationalists expressed at Trump's rise to power — that underpin many of these questions that Trump keeps bizarrely dodging. (As well as recent reports that Jewish community centers have seen a surge of bomb threats — as many as 60 just in January, according to an association of Jewish community centers.)

Calculated or not, Pence's visit may not be enough to quiet those who still wonder why Trump's administration seems to have such a hard time taking a specific stance against hate.

Pence, Poroshenko Discuss Possibility of US Assistance in Donbass Settlement