Eye of the Storm: Oroville Dam to be Tested by Three Storms in One Week

Crews are working around the clock to shore up the Oroville Dam’s emergency spillway, as several inches of rainfall are expected through next week and could threaten the beleaguered reservoir.

A trio of storm systems are set to barrage Northern California over the next couple of days. The first started Wednesday night and rain will continue until at least Tuesday, Feb 21. Forecasters are confident that the dam can handle the first two storms, but the third could be trouble, as it is expected to be the largest, and warmest, of the three.

"The third wave is looking like our problem child," said Michelle Mead, a warning-coordination meteorologist at the National Weather Service in Sacramento.

Oroville Dam is America's tallest dam, and the twentieth tallest in the world. The 40-year-old dam saw a hole form on Saturday in its emergency spillway, due to erosion and mismanagement. Fears that the entire dam could fail led to the state to evacuate nearly 188,000 downstream Californians.

After several days of emergency repairs, including a fleet of helicopters dropping stones into the spillway hole, state authorities allowed evacuees to return to their homes on Tuesday. The state continues to work to repair the dam's spillway, moving an estimated 1,200 tons of rock every hour into the spillway. 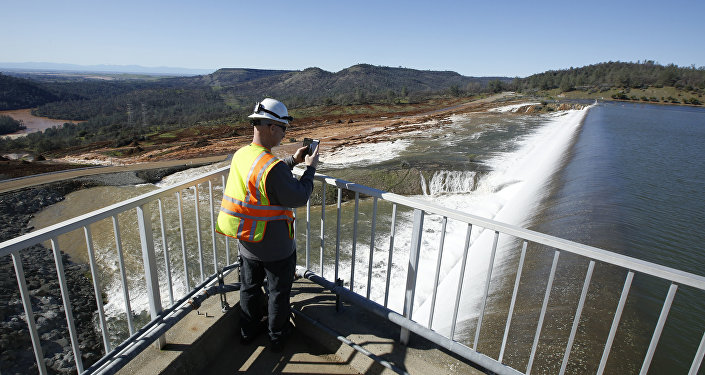 The rain will slow the repair efforts, however. Wet, muddy conditions will threaten heavy machinery and workers on the ground, while strong winds may ground helicopters. However, engineers are confident that the dam will hold through the storms.

On Wednesday, authorities in Butte County (where the dam is located) filed a petition with the Federal Energy Regulatory Commission to require the state to address the dam's deficiencies. "Butte County and others have warned of the potentially catastrophic consequences of DWR's [California Department of Water Resource] failure to adequately address dam safety issues at the Oroville Project, and we are now facing the consequences of DWR's short-sighted approach," Butte County counsel Bruce Alpert wrote.

Butte County, as well as other county governments and independent environmental groups such as the Sierra Club, urged the state to inspect the dam as far back as 2005. They were concerned that the dam could fail in the event of heavy rains due to erosion. The DWR repeatedly rebuked these claims.