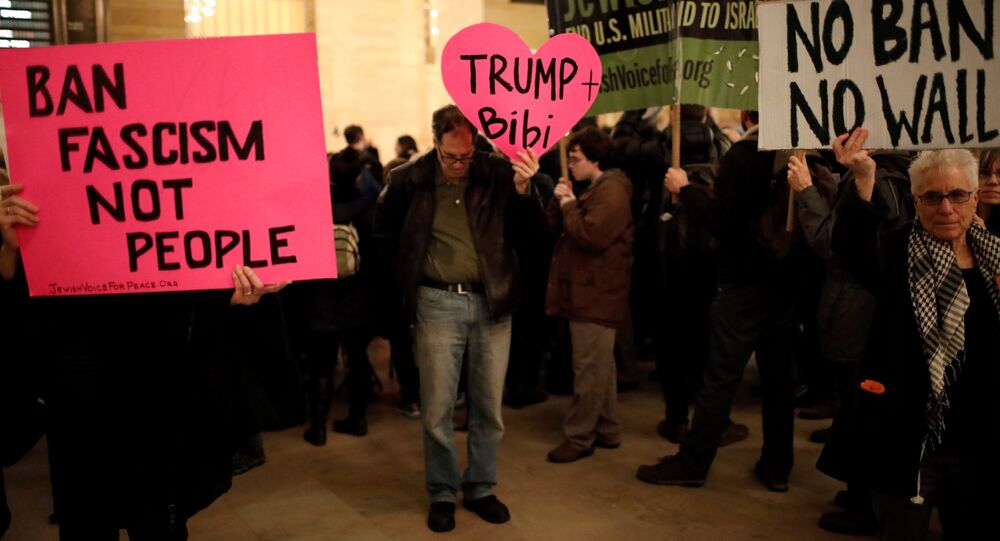 A dozen relatives and family members of victims of the September 11, 2001 terrorist attacks on the United States gathered in Manhattan on Thursday for a rally in protest of President Donald Trump's executive order on immigration.

NEW YORK (Sputnik) — Members of the Muslim community have been invited to join the protest to demonstrate "an important gesture of unity" against Trump's temporary travel ban on citizens from seven predominantly Muslim countries.

© AFP 2021 / EMMANUEL DUNAND
NY Post Writer Compares Trump’s Inauguration to 9/11
Demonstrators gathered in front of "The Sphere" sculpture in Battery Park, which has been pulled from the rubble of the World Trade Center in the aftermath of September 11 attacks.

"It's a place of great symbolism, especially because you can also see the Statue of Liberty from here," another activist told Sputnik.

Trump’s executive order was challenged by the state of Washington a few days later, which led to a district judge James Robart in Seattle to issue a temporary stay on the US president’s measure. Last Thursday, the 9th US Circuit Court of Appeals in San Francisco issued a stay on judge Robart’s stay.