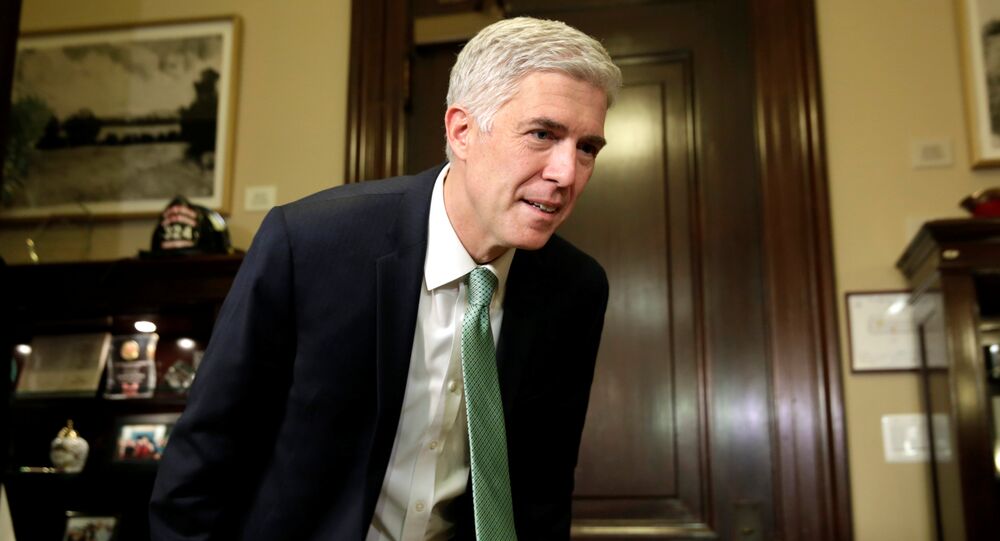 A coalition of 108 civil rights advocacy organizations wrote a letter to press members of the US Senate to reject the nomination of Judge Neil Gorsuch to fill a vacant seat on the US Supreme Court.

© REUTERS / Carlo Allegri
Mike Pence Vows to Make Neil Gorsuch Associate Justice of Supreme Court
WASHINGTON (Sputnik) — A coalition of 108 civil rights advocacy organizations is pressing members of the US Senate to reject the nomination of Judge Neil Gorsuch to fill a vacant seat on the US Supreme Court, according to a letter sent to lawmakers on Wednesday.

"If confirmed to the Supreme Court, which is closely divided on many critical issues, Judge Gorsuch would tip the balance in a direction that would undermine many of our core rights and legal protections," the letter stated. "He lacks the impartiality and independence the American people expect and deserve from the federal bench."

Trump, GOP Align Over Gorsuch Pick; Trump Takes On Australia
As evidence, the letter quotes from a 2005 article written by Gorsuch for the conservative National Review.

"American liberals have become addicted to the courtroom, relying on judges and lawyers rather than elected leaders and the ballot box, as the primary means of effecting their social agenda on everything from gay marriage to assisted suicide to the use of vouchers for private-school education," Gorsuch wrote. "This overweening addiction to the courtroom as the place to debate social policy is bad for the country and bad for the judiciary."

President Donald Trump has chosen Gorsuch as one of the most qualified judges in the United States to fill the Supreme Court seat left vacant by the death of Justice Antonin Scalia in early 2016.