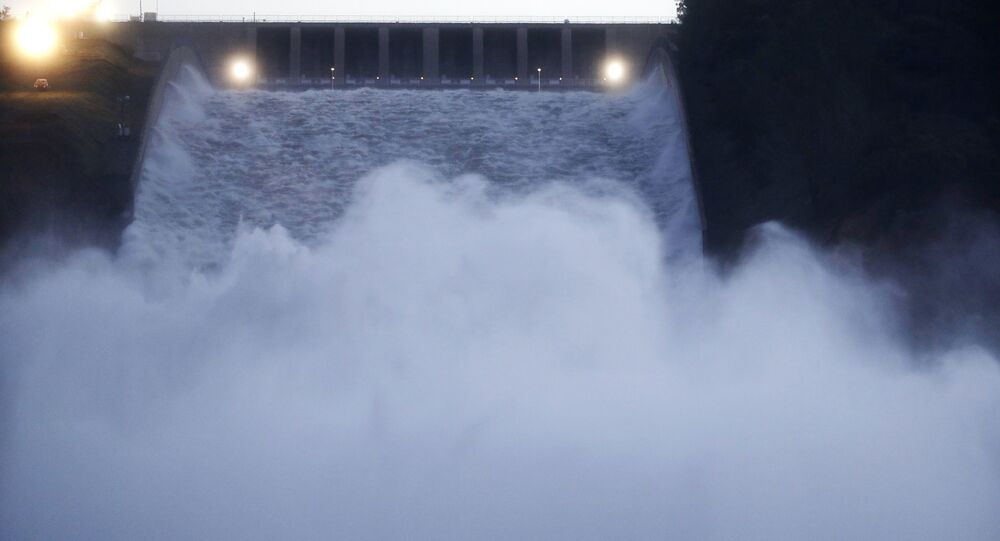 State officials say it could be ‘10-15’ days before the Oroville Dam crisis is resolved, leaving 188,000 Californians unable to live in their own homes. Crews are working around the clock to keep water levels low and repair the eroded spillway that caused the leak.

Around 750,000 gallons of water are being removed from the reservoir every second, with the hopes of getting the levels low enough to repair the hole. However, as much as 8 inches of rain is expected to start falling in and around the dam starting on Wednesday.

​“We’re working very hard to deal with the challenges we have,” said Bill Croyle, acting director of the California Department of Water Resources, to SFGate. “We’re focused on the whole facility. The dam itself is sound, but we have some pieces that are critical to the operation that have been impaired.”

Our latest images of the damage to the #OrovilleSpillway pic.twitter.com/L8cMQ3bLVZ

​When the spillway breach was detected on Sunday afternoon, local authorities ordered the evacuation of 188,000 people over three counties. An erosion scar at the foot of spillway was responsible for the breach.

​Authorities have tried to plug the hole by dropping rocks and sandbags on it via helicopters, but water continues to flow and the California government remains concerned. “When it’s safe, based upon the evaluation by the Department of Water Resources and the state and federal partners, then we’ll be in a better position to decide when to lift that evacuation,” said Butte County sheriff Kory Honea. Butte County is the location of Lake Oroville and had 32,000 of its residents evacuated.

​Among those evacuated include 579 Butte County Jail inmates, who were loaded into buses and transported to Santa Rita Jail in nearby Alameda County.

​In these trying times, some Californians have opened their homes to the evacuees. This includes the Gurdwara Sahib Sikh temple in Sacramento, which has provided lodging for over 200 people.  “We have all races – black, white, Asian and Hispanic,” said temple spokesman Darshan Singh Mundy. “There is no tobacco or alcohol, and all our meals are vegetarian.”

Cervantes family of Yuba city stay the night in Ravidas Sikh Temple as it opens its doors for evacuees of #OrovilleSpillway via @yamphoto pic.twitter.com/XSSzmmGX8N

​California authorities have decided to err on the side of caution, keeping the displaced thousands out until they’re positive that the dam is secure. “We don’t want people coming back into the community, then having another incident and having to evacuate again,” said water resources department spokesman Chris Orrock in a statement. “Our No. 1 priority is the safety of the community and our staff.”

​The California government has begun to come under fire for allowing the nation’s largest dam to erode. A May 2006 report from several environmental groups warned that the top of the dam was not stable was ignored by state authorities, who insisted that the dam “will not erode”.