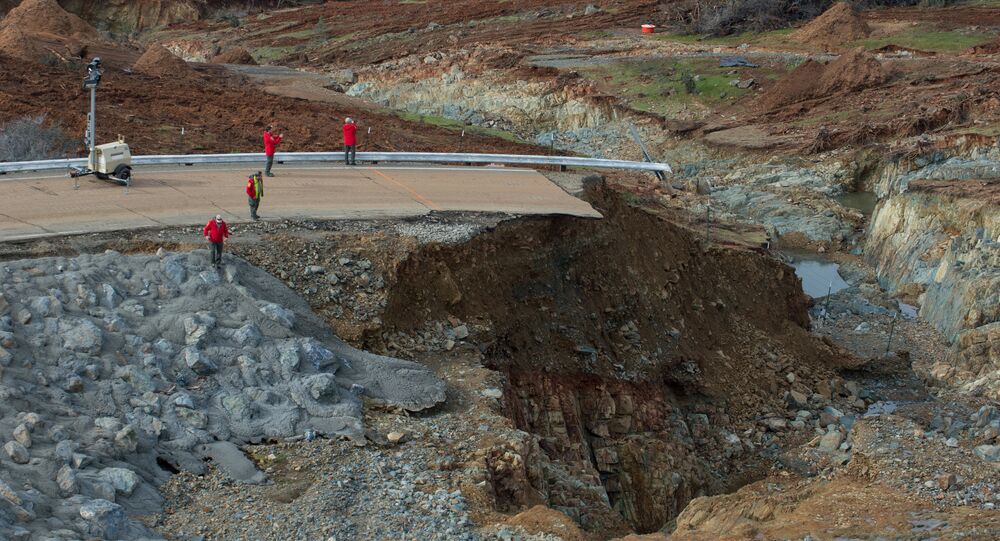 According to reports, California Governor Jerry Brown has sent a letter to US President Donald Trump with a request for federal assistance to the residents of counties located in vicinity of Lake Oroville.

© AP Photo / William Croyle
Mass Chaos in California After Dam Cracks, 200,000 Evacuated (PHOTOS, VIDEO)
MOSCOW (Sputnik) – California Governor Jerry Brown has sent a letter to US President Donald Trump with a request for federal assistance to the residents of counties located in vicinity of Lake Oroville, due to the Oroville Dam emergency spillway crisis.

"I respectfully request that you issue an Emergency Declaration for Direct Federal Assistance for the Counties of Butte, Sutter, and Youba, as a result of the potential failure of the Lake Oroville Dam emergency spillway… I am requesting Direct Federal Assistance for 10,000 residents of Butte, Sutter, and Yuba Counties who have been forced to evacuate and who required federal assistance," the governor said in a letter late on Monday.

As a result of the potential catastrophic flooding, about 188,000 residents of these counties were forced to immediately leave their homes for life and safety, Brown added.

Earlier on Monday, Brown declared an emergency situation by issuing an order, putting the emergency centers on alert due to the possibility that an auxiliary spillway, used to prevent overflowing at the Oroville Dam, might fail.

The authorities are currently trying to lower the level of water in Lake Oroville.

The emergency spillway was used to lower the level of water at the US tallest dam but erosion had damaged the concrete structure. After the years of droughts in California this year's rainy winter filled the lake with too much water, accelerating the erosion.

The Russian Information and Analytical Centre for Water Industry Development at the Ministry of Natural Resources and Environment has already proposed assistance to the United States amid the Oroville Dam crisis.