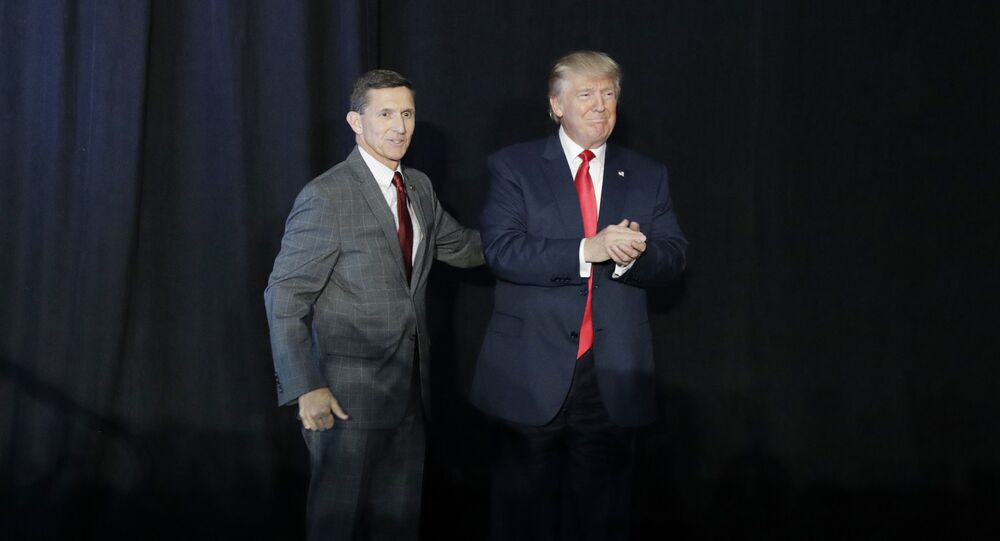 © REUTERS / Carlos Barria
Michael Flynn Leaves Post of Trump's National Security Adviser
MOSCOW (Sputnik) – Explaining his move in a resignation letter, Flynn said he had not provided the White House with full information about his contacts with Russian Ambassador to the United States Sergey Kislyak.

Lt. Gen. Flynn, who also served as the 18th director of the Defense Intelligence Agency, was born in 1958 in Middletown, Rhode Island, the United States.

In 1981, Flynn graduated from the University of Rhode Island with a bachelor of science degree. He also received a master of business administration in telecommunications at Golden Gate University, a master of military art at the United States Army Command and General Staff College, and a master of arts in national security and strategic studies at the Naval War College.

In 1981, Flynn started his career in the US Army, including service at the 82nd Airborne Division. In 1983, Flynn took part in the invasion of Grenada and in 1994 he was deployed for Operation Uphold Democracy in Haiti.

In 2001-2002, Flynn was in charge of intelligence operations in Afghanistan, and from June 2002 to June 2004, he headed the 111th Military Intelligence Brigade.

In 2004-2007, Flynn was the director of intelligence for Joint Special Operations Command, working in Afghanistan and Iraq.

In 2007-2008, he served as the director of intelligence at the United States Central Command and later at the Joint Chiefs of Staff.

In 2009, Flynn became the director of intelligence at the International Security Assistance Force in Afghanistan.

In 2011, he was promoted to Lieutenant General and joined the Office of the Director of National Intelligence and in a year then-President Barack Obama nominated him the director of the Defense Intelligence Agency.

In 2014, Flynn announced his resignation.

In February 2016, Flynn became an unofficial foreign policy adviser of Trump's election campaign, and after winning the election in November 2016, Flynn was offered the post of presidential national security adviser.

On January 22, Flynn started to perform his duties as the national security adviser, having resigned in less than a month.