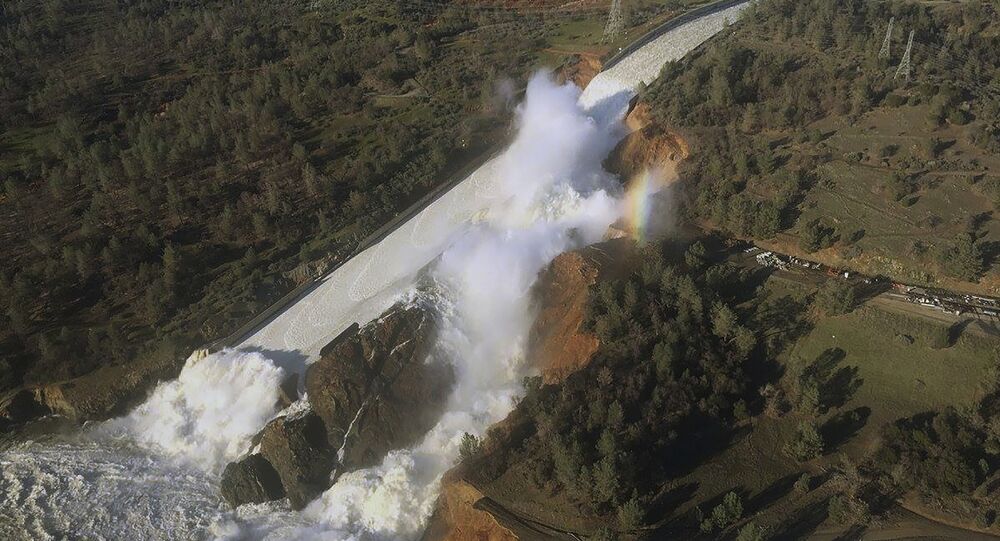 Almost 200,000 Californians have been evacuated from their homes as a result of the spilling from the Oroville Dam. California authorities continue to try to repair America’s tallest dam.

Lake Oroville, one of the largest man-made lakes in the United States, suffered severe flooding on Saturday that forced hydraulic engineers to activate an emergency spillway on the 770-foot-dam. The spillways, unused for half a century, failed to control the flooding and a large hole formed Sunday afternoon.

This is what the Orville spillway looks like right now. Huge plumes shooting up as the water crashes down. pic.twitter.com/9ATU4HSibs

​Local authorities have blamed the hole on unexpected erosion. The spillway is meant to handle 250,000 cubic feet of water per second, according to California Department of Water Resources spokesman Kevin Dossey. But the cracks first formed at only 12,600 feet per second.

​Had the spillways totally failed, billions of gallons of water would have flowed from the lake and flooded three counties. In response to the potential flooding, the state government ordered an evacuation that displaced 188,000 nearby people. "Everyone was running around; it was pure chaos," Oroville resident Maggie Cabral told KFSN. "All of the streets were immediately packed with cars, people in my neighborhood grabbing what they could and running out the door and leaving. I mean, even here in Chico, there's just traffic everywhere."

​Hundreds of thousands of evacuees blocked the roads, trapping residents in heavy traffic.

​The water levels have since receded, but not to the point to rescind the evacuation order. "There is still a lot of unknowns," said Kony Honea, sheriff of Butte County where Lake Oroville is located. "We need to continue to lower the lake levels and we need to give the Department of Water Resources time to fully evaluate the situation so we can make the decision to whether or not it is safe to repopulate the area."

​"I'm not going to lift the evacuation order until I have a better idea of what that means and what risk that poses," Honea said late Sunday night.

​Honea also said that the county intended to plug the hole in the dam by dropping sandbags and stones in it with a helicopter. According to California National Guard Adjutant General David S. Baldwin, a fleet of eight helicopters will plug the hole on Monday. They also hope to drain nearly 400 billion gallons of water from the lake to lower water levels 50 feet, a tall order. Governor Jerry Brown issued an emergency order in response to the potential flooding. The National Weather Service has issued flash flood and dam failure warnings for Butte County.

​In May 2016, an inspection of the Oroville Dam concluded that it was vulnerable to breaking in the case of an earthquake. Inspectors also noted that due to its tremendous size, the dam could actually cause an earthquake that would damage itself.

Nearly 40 Dead, Over 92,000 Homeless in Niger Amid Flooding, OCHA Says