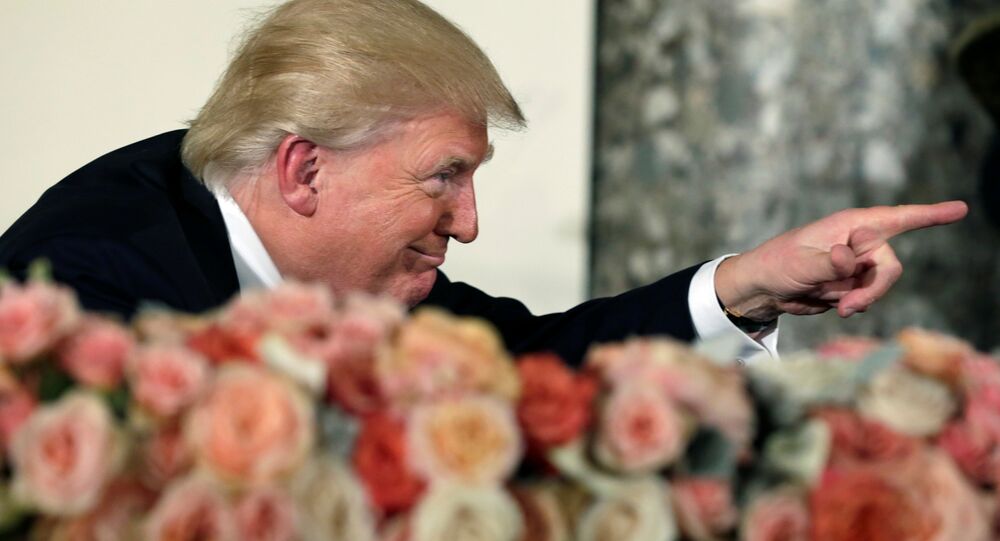 US President Donald Trump said February 12 that the arrest of hundreds of undocumented immigrants in the country over the past week was him keeping his campaign promises, contradicting immigration enforcement officials' assertions that the raids were routine and did not portend a change in enforcement tactics.

"The crackdown on illegal criminals is merely the keeping of my campaign promise. Gang members, drug dealers & others are being removed!" Trump tweeted.

During his campaign, the president promised to deport millions of undocumented immigrants.

The US Immigration and Customs Enforcement Agency (ICE) rounded up hundreds of undocumented immigrants in sweeps across the country over the past week. Among the those taken into custody were law-abiding but undocumented aliens who opened their doors to help what they believed were police searching for criminals, only to be taken away themselves. A mother of two was also deported after what appeared to be a routine, scheduled visit with ICE.

In a statement, ICE said, "The focus of these operations is no different than the routine, targeted arrests carried out by ICE's Fugitive Operations Teams on a daily basis."

ICE Director of Enforcement and Removal Operations in Los Angeles David Marin said February 10 that the week's immigration sweep was planned before Trump took office and compared it to a similar operation last summer that resulted in 200 arrests, the Chicago Tribune reported.

Such operations are conducted two or three times a year, Marin said. He also scolded media reports about ICE raids and paperwork checks as "dangerous."

The ICE in a series of tweets said it was targeting specific immigrants according to law, but also those who are "illegally present" in the US.

More than 160 people were arrested in Southern California alone during the operation.

Trump last month reversed those reforms, broadening the scope of individuals the Department of Homeland Security can target to again include those with minor offenses or no convictions at all.

Activists have challenged the ICE's claims that it's all business as usual. If Trump's tweet is to be believed, they're right.

"The President wants to show off and it appears he has unleashed the Department of Homeland Security to kick out large numbers of immigrants and anyone they encounter, without much oversight, review or due process. There is very little official information on what appears to be a new Trump deportation initiative. Homeland Security is deporting moms, dads and working men and women under the smoke screen of criminal or anti-terror actions," he wrote.

"We are getting reports about the targeting of people who are complying with the law when they report to immigration authorities, people who are long-term residents with deep ties to their communities and no criminal activity, and people authorities just encounter when they say they are looking for someone else," he noted, echoing reports from activist groups around the country.

"Like so much the President says, the idea that mass deportation is a tool for crime reduction or national security is a straight up lie. There is no law-enforcement or anti-terror motive for rounding up working-class immigrants in their homes, in the fields and workplaces, or taking random people off the street. The President is lying when he says deporting immigrants is about fighting crime.

Trump aide Stephen Miller told Fox News Sunday that the raids were indeed "expanded and more vigorous" because of the new president.

"As a result of the president's order, greatly expanded and more vigorous immigration enforcement activities are taking place," he said. Though Operation Cross Check activities happen every year, "this year we have taken new and greater steps to remove criminal aliens from our communities," Miller said.

A series of immigration raids dubbed "Operation Cross Check" began in 2011 under Obama, who, while working on reforming the immigration system for undocumented children or parents of Americans, also deported some 2.5 million people.