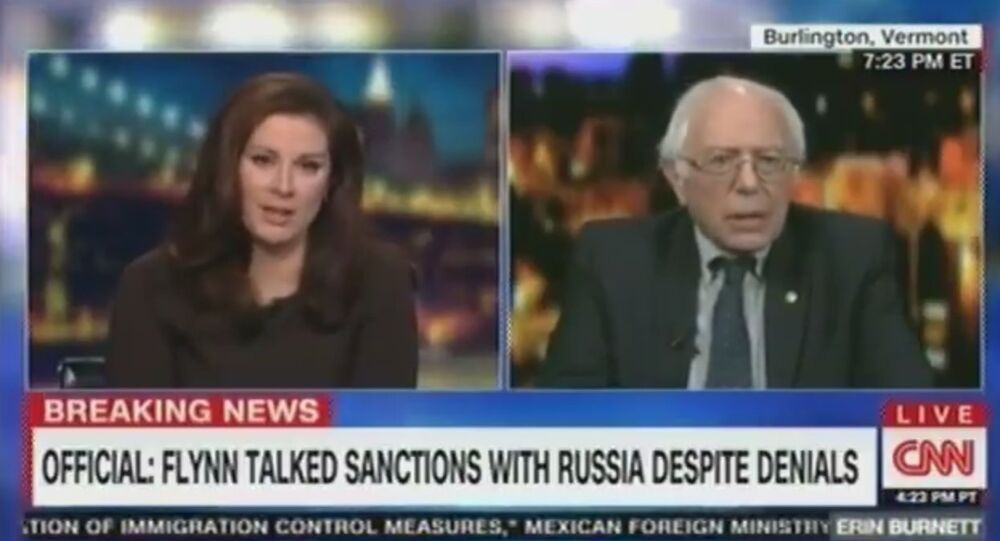 Donald Trump has a rocky relationship with CNN. Last month he dubbed the news network 'fake news' after its false reporting over his activities in Russia several years back. Now, the President is at it again, going off on the network for cutting off Bernie Sanders' feed after the Senator jokingly used the term 'fake news' to describe CNN.

On Friday former Democratic Party presidential hopeful Bernie Sanders sat down with CNN to talk about rumors that Trump National Security Advisor Michael Flynn had privately discussed the issue of anti-Russian sanctions with the Russian ambassador to the US before Trump took office.

© AP Photo / Chris Pizzello
CNN’s Chris Cuomo Apologizes for Comparing ‘Fake News’ to the ‘N-Word’
The interview began rather ordinarily, with Sanders toeing the Democratic Party line about Russia interfering in the US elections, and accusing the Russian President of being a "thug." The senator called the accusations of Flynn meeting the Russian ambassador "troubling" and suggested that the president had some explaining to do.

Trump himself had earlier commented on the report involving Flynn by saying he hadn't seen it and knew nothing about it.

Asked by his interviewer if that was a problem, Sanders quipped: "Well I don't know. Maybe he was watching CNN fake news. What do you think?"

Following a short uncomfortable pause, Sanders quickly added "It was a joke," before his sound feed was cut. Sanders could be seen onscreen looking confused for several more seconds before his video was also cut.

Donald Trump, who famously called CNN "fake news" last month and refused to give their reporter a question at a press event after the broadcaster had helped to fuel false rumors of #GoldenShowerGate, which accused the president of hiring prostitutes at a Moscow hotel and engaging in lewd behavior, took the opportunity to slam the network again on Sunday via Twitter.

"While on FAKE NEWS @CNN, Bernie Sanders was cut off for using the term fake news to describe the network. They said technical difficulties," Trump wrote.

While on FAKE NEWS @CNN, Bernie Sanders was cut off for using the term fake news to describe the network. They said technical difficulties!

CNN went into damage control mode, its CNN Communications account saying that the president was wrong, and that the transcript showed that Sanders "was not cut off. Those are the facts."

But their own transcript clearly shows that Sanders really was cut off after joking about CNN being fake news, and returned only following a commercial break.

Bizarrely, CNN journalists Jake Tapper and Brian Stelter, who weren't even involved in the Sanders interview, felt a powerful urge to explain that Sanders was joking, and to say that Sanders was really "*criticizing Trump* for calling CNN 'fake news.'"

Untrue. Sanders was *criticizing Trump* for calling CNN "fake news." You can see for yourself, all 11 minutes, here: https://t.co/qhtlb5Wo6Q https://t.co/AcwOiNHi0j

With CNN's defenders accusing Trump of being a liar, Trump supporters rushed to post punchy comments and memes on his tweet.

@AJ The fact that @CNN responded makes them a joke.

Trump Says US Embassy in Tel Aviv Is not Going Anywhere