Hundreds Arrested in Immigration Raids Across US

Hundreds have been arrested this week in at least six states in immigration raids officials are calling routine but immigrant rights groups categorize as "not normal" and causing "terror."

At least 160 people were arrested in Southern California alone, and 200 in Georgia and North and South Carolina, NBC reports. Agents also raided homes and workplaces in Arizona and in the Chicago, New York and Atlanta metro areas.

Immigration Activists and Police Clash in Arizona; the FCC Under Trump

Immigration activists told the Washington Post that they had also had reports of raids by Immigration and Customs Enforcement (ICE) personnel of "unusual intensity" in Florida, Kansas, Texas and Northern Virginia.

The American Civil Liberties Union began February 10 sharing on social media a list of actions for immigrants to take "if ICE agents show up at your door."

ICE officers have called the five-day sweep last week a routine "enforcement surge" and criticized media reports about their actions.

"The rash of recent reports about purported ICE checkpoints and random sweeps are false, dangerous, and irresponsible," ICE said in a statement, according to NBC. Instead, the actions were planned and targeted at illegal immigrants with criminal records. According to the ICE, about three quarters of those detained in California had felony convictions; the rest were either in the US illegally or had misdemeanors convictions, the Washington Post reported.

California lawmakers, however, are challenging the ICE's description of its activities. California Senate President pro Tempore Kevin de León said in a statement that the ICE had scolded media outlets for saying 100 people had been arrested only a day before admitting to arresting even more.

"ICE also told numerous media outlets that yesterday was a "routine" day which it most clearly was not. And they have yet to disclose the exact crimes each person was convicted of to support their arrests." He called the disconnect between information released to the public by the immigration authorities and the reality of their movements "deeply troubling."

"Let me be clear, we want to work together to get violent felons out of our neighborhoods; however, we remain deeply concerned with the new Administration's recent decision to prioritize nearly every undocumented resident in California for deportation, and their apparent inability to accurately inform the public of their operations in a timely manner," de León said.

Immigrant rights activists say the ICE's raids were anything but routine.

"This is not normal," Angelica Salas, director of the Coalition for Humane Immigrant Rights of Los Angeles (CHIRLA), told a press conference February 10. "We have responded to raids in the past and this is what sweeps… large numbers of people picked up in a very short period of time, look like."

One of those arrested was the father of Marlene Mosqueda. She said ICE agents came to her house looking for someone else — and that the agents weren't wearing ICE identification, but looked like police. Her father, despite not having a criminal record and not being the criminal targeted by the raid, was picked up, something Salas said isn't — or hadn't been — typical behavior by ICE agents.

"We cannot understate the level of panic and terror that is running through many immigrant communities," Walter Barrientos, a member of the nonprofit organization Make the Road New York, told Business Insider.

ICE agents were "not just detaining individuals they are looking for… but in fact, taking anyone else in the community, or in these homes who does not have immigration status at the moment, or who is not able to prove citizenship," he said.

ICE says the raids were planned before US President Donald Trump signed several controversial immigration orders in the past few weeks, among them orders to immediately detain and deport illegal immigrants and to hire more border patrol agents.

Rights groups scoff at this, saying it feels like a return to the days when any undocumented immigrant was liable to be swept up and deported at any time. Under former President Barack Obama, US immigration authorities were directed to prioritize arresting illegal aliens with criminal histories or who threatened public safety. (Despite these reform efforts, more than 2.5 million people were deported during his administration, more than under any other US leader.)

Trump's order broadened the categories of people targeted for deportation, making any undocumented immigrant in the US a priority for deportation. However, David Marin, director of enforcement and removal for the Los Angeles field office of US Immigration and Customs Enforcement, said only five of those arrested in California would not have been enforcement priorities under the Obama administration, according to Reuters.

Michael Kagan, a professor of immigration law at the University of Nevada at Las Vegas, told Deutsche Welle the raids could be the first of many broader sweeps.

"It sounds as if the majority are people who would have been priorities under Obama as well," he said. "But the others may indicate the first edge of a new wave of arrests and deportations."

Texas Congressman Joaquin Castro has expressed concern about the raids, and said he has asked ICE to clarify "whether these individuals are in fact dangerous, violent threats to our communities, and not people who are here peacefully raising families and contributing to our state. I will continue to monitor this situation."

He asked over Twitter for people to send him evidence of ICE raids, referring to them as "Operation Crosscheck," and random paperwork checks. 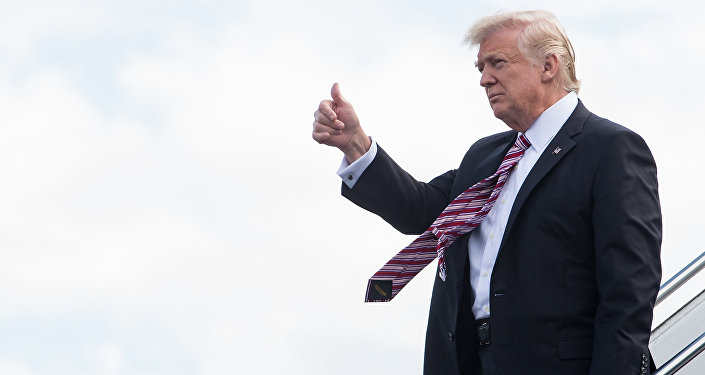 Los Angeles Mayor Eric Garcetti has asked ICE for "greater transparency about ongoing operations" and the status of those arrested, he said.

"Angelenos should not have to fear raids that are disruptive to their peace of mind and bring unnecessary anxiety to our homes, schools, and workplaces," Garcetti said. "The administration should take a just, humane and sensible approach that does not cause pain for people who only want to live their lives and raise their families in the communities they call home."

The raids have spurred protests in California, Texas, North Carolina, Washington, DC and elsewhere in the country.

Trump 'Has No Doubt' in Winning Court Case on Immigration Order