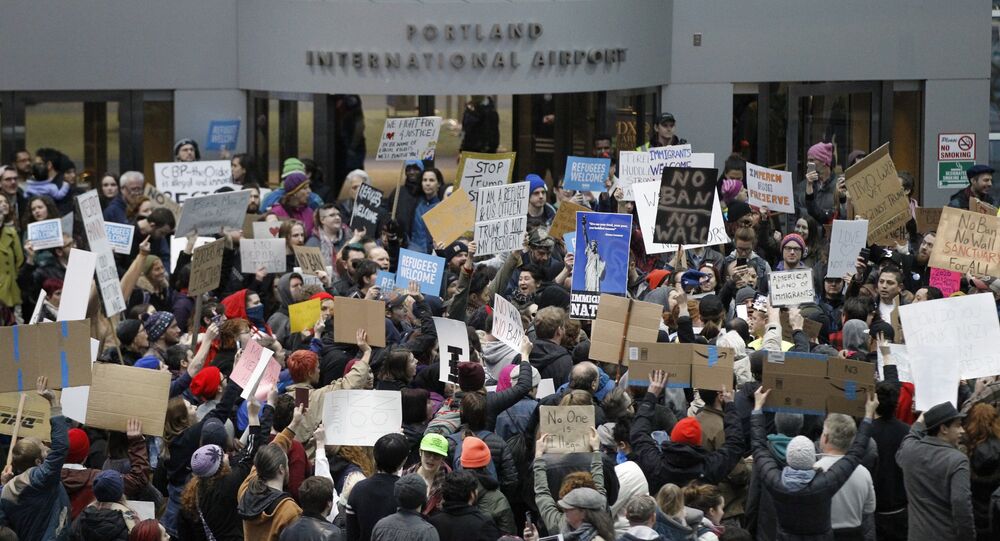 Over 100 People Rally in Texas Against Detentions of Undocumented Migrants

More than 100 people participated in a protest rally in the US city of Austin, Texas opposing federal operations aimed at detention of undocumented migrants with criminal records, local media reported.

© REUTERS / Carlos Barria
Trump Appoints Homan Acting Director of US Immigration Enforcement
MOSCOW (Sputnik) — Earlier in the week, officials from the Immigration and Customs Enforcement (ICE) of the US Department of Homeland Security launched a large-scale operation to find undocumented migrants with criminal history and to deport them.

People started to gather in the northern part of the city at 9 p.m. local time Friday (03:00 GMT Saturday) protesting against the activities of the ICE agents, who had detained a man and handcuffed him, the Austin American-Statesman newspaper reported.

The protesters chanted such slogans as "immigration is a human right" and carried flags of the United States, Mexico and Honduras, the news outlet added.

​According to the newspaper, there were students and representatives of such groups as the League of United Latin American Citizens and Peaceful Streets Projects.

The recent ICE operation is carried out against the backdrop of US President Donald Trump's immigration policy implementation. The politician has repeatedly said about the need to tackle the undocumented migration and to protect the country from potential threats posed by immigrants with criminal records during his campaign.

Since the inauguration, the president has also introduced entry restrictions for the citizens of seven Muslim-majority states, which has caused protests across the United States as many people considered it discriminatory and unconstitutional.

Trump Will Not Appeal Travel Ban Decision To US Supreme Court