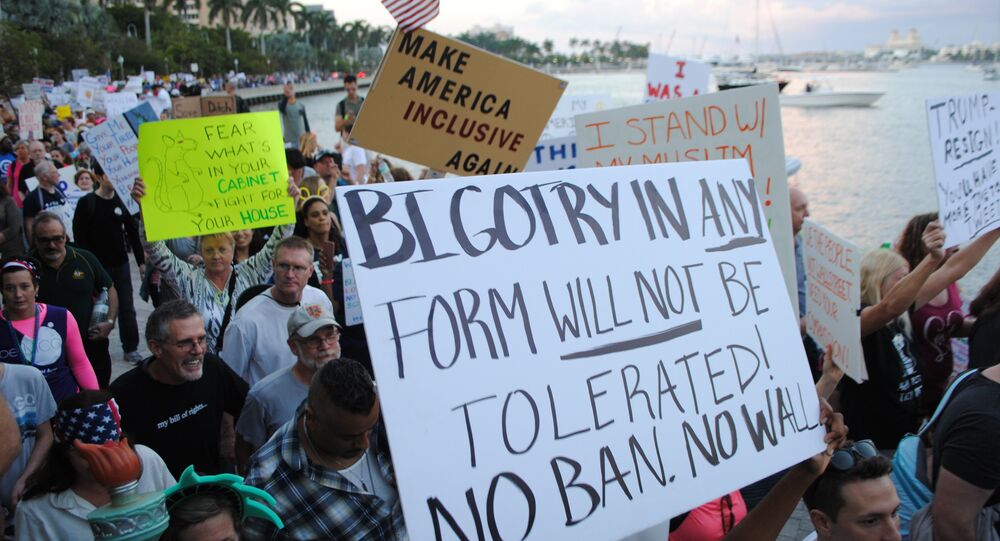 Almost a cliche, spread through viral images and chain emails: a group of protesters block a road, preventing an ambulance from reaching a wounded person or a hospital. But just such a scene played out in New Haven, Connecticut, as protesters obstructed an ambulance carrying a ‘critically ill’ patient.

The New Haven Independent reported that on Saturday evening, a group of some 200 demonstrators took to the streets for a march protesting the immigration policies of US President Donald Trump, carrying a large banner that read "No Ban No Wall New Haven."

Protesters blocked the highway, stopping traffic. According to the Independent, an ambulance carrying a "critically ill patient," was stopped as well. "Due to this delay, ambulance personnel were required to perform an emergency medical procedure in the ambulance instead of at the hospital," the Independent reported.

The ultimate fate of the patient has not been disclosed. Unconfirmed reports claim that the patient was a pregnant woman.

Police attempted to move the protesters out of the ambulance's path, but one in particular refused to move. "The officers tried to guide him out of the way. He pushed an officer trying to get back," said Lt. Sam Brown, an officer at the scene.

That man, as well as two other protesters, were arrested and charged with inciting a riot, disorderly conduct, interfering with an officer, and reckless use of the highway by a pedestrian. Among those arrested included event organizer Norman Clement.

"Clement ran from law enforcement personnel through the crowd, knocking over several of his supporters, before being apprehended. Clement actively resisted arrest and was sprayed with [pepper spray]," police said. Clement has been released on $5,000 bail and a court date has been set for Feb 13.

Attorney Patricia Kane, representing Clement, said that the protesters asked police to inform them if emergency vehicles needed to get through. Since the officers did not inform the protesters, Kane said, the blockage was the fault of the police, and not the protesters. Kane added that Clement ran because he was intimidated by a police officer with a service dog.

"The trooper with the dog frightened everybody. The dog jumped on me. Shades of Selma," said Kane, comparing the New Haven protest to Martin Luther King's historic 1965 march to protest voter suppression and police brutality against African-Americans.

Blocking a road while protesting is illegal in the state of Connecticut. In a statement, police said that blocking roads is "dangerous and will not be tolerated. All laws will be strictly enforced."

Protesters insist that their demonstration was peaceful. "We took the highway and then the police came up with dogs," said Brett Davidson, one of the demonstrators. "They were very intimidating…. The police were very eager to make an arrest. The police all of a sudden got very aggressive."