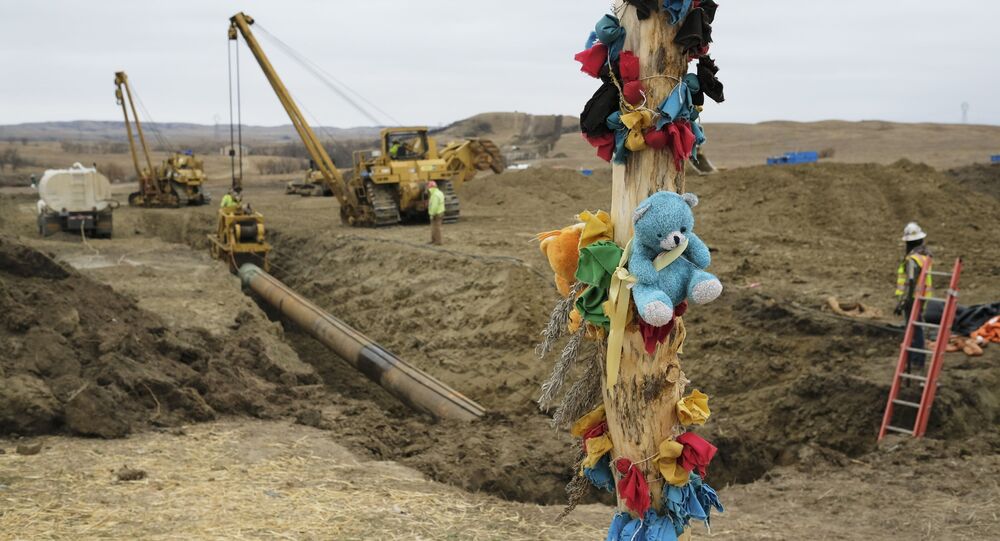 © REUTERS / Terray Sylveste
Dakota Pipeline Tribe 'Unlikely to Back Down' Despite Trump Executive Orders
MOSCOW (Sputnik) – US Green Party leader Jill Stein said Friday that Dakota Access Pipeline construction is a violation of democracy, calling on citizens to join Standing Rock Sioux Tribe to protest the project in the wake of President Donald Trump's order to advance the construction.

"It’s absolutely a violation of human rights, of our water rights, of our climate, and of our democracy … I really urge people, if you are able-bodied, go there and stand with Standing Rock," Stein told the RT broadcaster.

Stein added that she was concerned over the possibility that the permit for completion of the oil pipeline construction would be put forward as it was likely to result in contamination of the Missouri River water resources.

On Wednesday, police in the US state of North Dakota said they had arrested 76 people, demonstrating against resumption of the controversial Dakota Access Pipeline construction after the Army Corps of Engineers were dispatched to the site.

On Tuesday, US Sen. John Hoeven said Acting Secretary of the US Army Robert Speer had sent engineers to resume the work on the final stage of the oil pipeline construction, despite protests of indigenous people and environmental activists.

In December 2016, the US Army Corps of Engineers took the decision to deny a construction permit for part of the Dakota Access pipeline, intended to transport domestically produced light crude oil from North Dakota into Illinois, for fears of damaging sacred burial grounds and water sources.