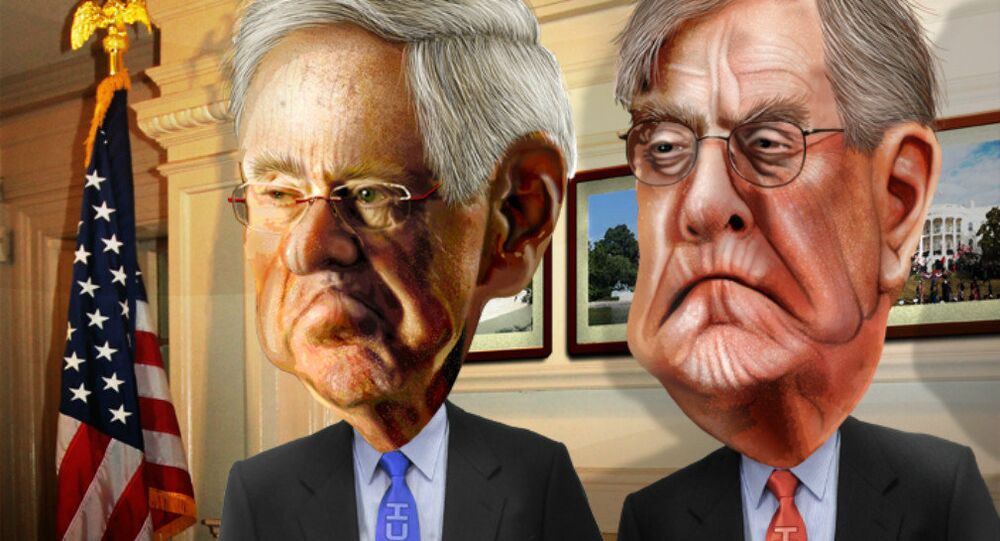 More than 500 Republican donors gathered on Saturday at a luxury hotel in the California desert hosted by billionaires Charles and David Koch, where they made it explicitly clear that even with their party man in the White House, they are not ready to be yes-men for lawmakers in Washington and plan to combat moves that run afoul of their policies.

The influential policy and political network led by billionaires Charles and David Koch have revealed their plans to spend millions on politics and policy in the 2018 US Senate election cycle.

More than 500 Republican donors invited by the Kochs for a three-day biannual retreat at a luxury resort near Palm Springs, California were "plotting their next two-year plan, including how to keep Trump and his congressional allies accountable," according to The Time website.

In November 2018, 33 of the 100 seats in the US Senate will be contested in regular elections. The winners will serve six-year terms from January 2019 to January 2025.

The Senate is currently composed of 52 Republicans, 46 Democrats, and 2 independents, both of whom caucus with the Democrats.

"The Koch network can claim some credit for that Republican comeback, having spent $250 million during the 2016 election, including in eight frontline Senate races," notes RealClearPolitics (RCP), a Chicago-based political news and polling data aggregator.

© REUTERS / Carlo Allegri/File Photo
Gathering of Compromising Data on Trump Financed by Democrats, Republicans
"In seven of the eight up-for-grabs US Senate races last year, the Koch-backed candidate won. In all, Koch-backed candidates at all levels of races prevailed 96% of the time—a record any outside group would covet," echoes The Time.

According to reports, the network now plans to ramp up its spending on politics and policy in the 2018 election cycle, with plans to spend between $300 million and $400 million, up from $250 million spent in the 2016 cycle. That spending applies to state- and federal-level efforts.

Each of the attracted donors is reportedly willing to donate at least $100,000 each year to the various conservative political and policy groups backed by the Koch brothers.

Interestingly enough, the network refused to support their party man Trump in the run-up to his election, raising questions about both his readiness for the job and his dedication to conservative principles.

At that time, neither Trump nor Hillary Clinton "excited the billionaires," as the network was sure that neither "were likely to advocate for the network’s agenda." The billionaires therefore chose to "focus instead on maximizing the number of principled leaders in the House and Senate who will.”

© REUTERS / Mike Segar
US Senate Republicans Plan Quick Confirmation for Trump's Attorney General Pick
Reporters who were allowed to attend this year's sessions if they agreed not to identify donors who chose to remain anonymous, say that Trump's name was not mentioned by Koch, or the four other speakers, at the welcome reception.

The group's primary benefactor ignored the new administration and noted instead that his network successfully helped preserve the Republican majority in the Senate.

The new president however was much criticized for his executive order he signed on Friday suspending entry into the US of anyone from Muslim-majority countries.

The Koch network is also reportedly set on a policy collision course with Trump on tax reform and trade, namely a potential “border tax” on imports, for example.

"It is "a no-go for us," said James Davis, a spokesman for the Koch network, adding that the network "planned to have conversations with members on Capitol Hill to make them understand the impact."

Hence the announced increase on 2018 Race spending  was "the latest sign that, even with Republican majorities in both chambers of Congress and Donald Trump in the White House, these ultra-rich activists are not ready to be yes-men for lawmakers in Washington and plan to combat moves that run afoul of their policy goals," The Time concluded.

Asked whether the network would use that spending to hold lawmakers accountable for not advancing its priorities, Mark Holden, a co-chairman of the networkn said: “Our bread and butter—our secret sauce—is the accountability play.”

He added: “We’re going to make our point of view known.”

Gathering of Compromising Data on Trump Financed by Democrats, Republicans

Republicans Not Backing Trump Should Not Expect Voter Support - Ex-Governor