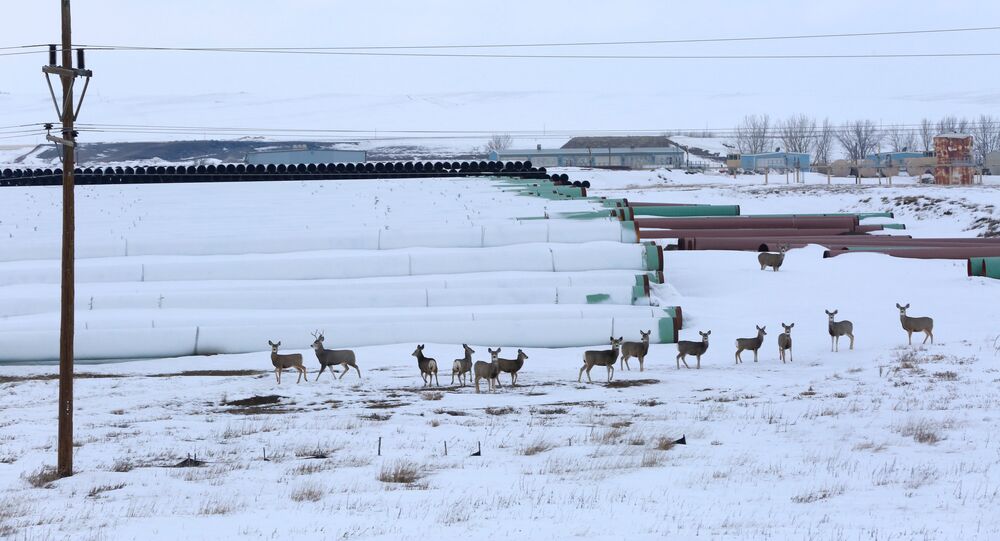 Environmentalists and the Standing Rock Sioux tribe are unlikely to give up their protest despite Donald Trump's executive order for the Dakota Access pipeline project to restart construction, Scott L. Montgomery, US author and geoscientist, told Radio Sputnik.

© Fotolia / marrakeshh
Making Energy Great Again, but What About Oil Prices? US Border Tax is the Answer
The Dakota Access Pipeline is intended to transport domestically produced light crude oil from North Dakota through the states of South Dakota and Iowa into Illinois. In December, the US Army Corps of Engineers decided to halt final-stage construction of the pipeline because of environmental concerns.

On Tuesday new US President Donald Trump signed an executive order for the Army Corps of Engineers to expedite reviews and approvals for the remaining portions of the Dakota Access Pipeline, before the environmental assessment is completed.

Trump also signed an executive order to revive the Keystone XL project, a proposed 1,179-mile pipeline that would link the oil sands region in the Canadian province of Alberta to the US state of Nebraska, and all the way to the oil refineries on the Gulf of Mexico coast.

In February 2015, President Barack Obama vetoed a bill to allow the construction of the Keystone XL pipeline because of "security, safety and environmental issues."

Since spring 2016 environmental groups and the Standing Rock Sioux tribe have protested the Dakota Access Pipeline. The tribe argues that the construction violates several federal laws, including the National Historic Preservation Act.

They say that the pipeline, which is planned to cross under the Missouri River, will harm water supplies on their reservation in North and South Dakota, as well as downstream, and disturb ancient burial grounds.

© AFP 2021 / Robyn BECK
Members of the Standing Rock Sioux Tribe and their supporters opposed to the Dakota Access Pipeline (DAPL) confront bulldozers working on the new oil pipeline in an effort to make them stop, September 3, 2016, near Cannon Ball, North Dakota

US author and geoscientist Scott L. Montgomery told Radio Sputnik that it is difficult to see how the dispute will end, since environmentalist and Native American campaigners remain determined to stop the project.

"The Sioux nation as a whole is also particularly activist, they were at the forefront of the Native American movement back in the 1960s and early 1970s. They take this type of situation very seriously, and they will not back down. They are not afraid of violence," Montgomery said.

"There will be many environmentalists who will come to the forefront of this also and add another element, and that is to do battle against all new pipelines. Possibly in a symbolic way to stop fossil fuel use or transport, but also in a very direct, concrete way to do that as well, to try and throw a wrench into the fossil fuel system in the US."

"There are at least three different points of view on the anti-side, so it's pretty complex, it's symbolic, it's concrete, it's very high-level. I don't see them backing down and personally I'm quite worried about the level of violence that might occur."

"No-one quite knows how far Donald Trump will go, it's very early and this may be one of the situations that draws him out that way," Montgomery said.

© AFP 2021 / ROBYN BECK
Iowa Pipeline Leak Causes 138,600 Gallons of Diesel to Drain
If protests continue, Trump could deploy the National Guard or even the military to support local law enforcement, which are "somewhat reticent to engage people in their own state, people who they have a fair bit of sympathy for."

Montgomery said that one group with the power to change the situation is Energy Transfer Partners, the company which is constructing the pipeline.

Donald Trump had a stake in the company, which a spokeswoman for the President-elect said he had sold in December. Trump's nomination for Energy Secretary, Rick Perry, sits on Energy Transfer Partners' board of directors.

"There is an alternate route, it would be more expensive, it goes around this area (by) a significant distance but they seem unwilling to do that. They do have contracts for delivery of oil and payments on debt, so they feel that they're in the corner. I don't know if that's accurate, but they do feel that they're up against certain deadlines," Montgomery said.