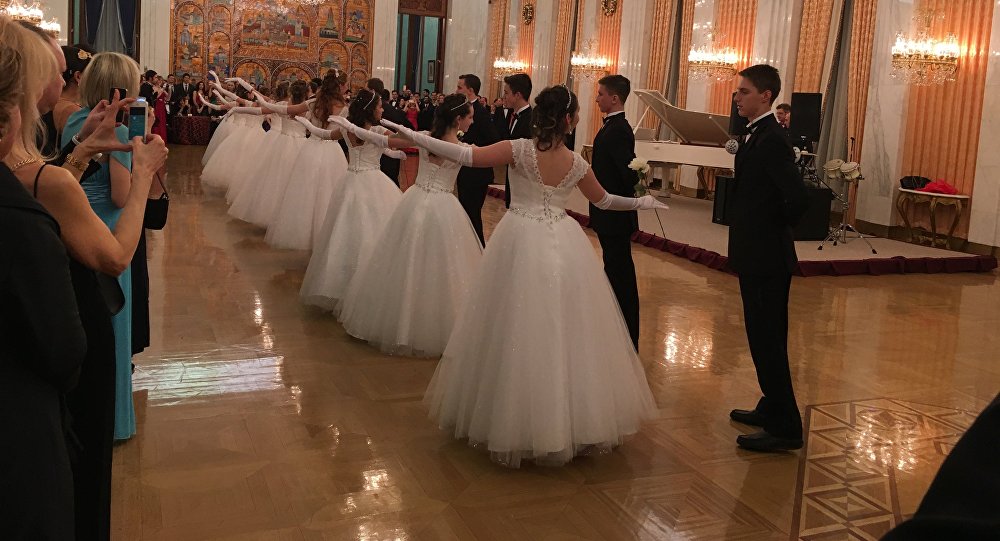 The Russian Embassy in Washington, DC in partnership with the Cathedral of St. John the Baptist will host its third annual Tatiana Ball on Friday to both celebrate the religious holiday, which is also a Students' Day, and to raise money for charity, Archpriest Victor Potapov told Sputnik.

© Sputnik /
Russian Embassy's Tatiana Day Ball Among Most Popular Events in Washington
WASHINGTON, January 27 (Sputnik) — The Tatiana ball, which will be held in the embassy's Golden Great Hall, will feature traditional Russian music, singing and dancing, along with traditional Russian food, and is usually attended by several hundred people.

"It's a great old Russian tradition to hold balls on January 25, the religious holiday honoring Christian martyr St. Tatiana considered the Students’ patron. This is also the day of the establishment of the first University in Russia," Potapov said on Thursday. "Our Russian immigration held such balls every year. We are very glad this tradition was revived in Russia a few years ago. Here in Washington, we organize this ball with the support of Russian Ambassador [to the United States] Sergey Kislyak and his wife Natalia."

Potapov explained that the event welcomes both Russian youth and the American people interested in Russia.

"I think this cultural event is especially important now to show a positive side of Russia amid the worsened relations between our countries," he added. "We really hope that this event will help defuse the situation."

The Archpriest pointed out that the main purpose of the ball is raising money for charity.

"A very significant portion of the collected funds we will send to Dr. Lisa Glinka's charity Fund 'Fair Aid' in her memory," Potapov noted. "This year we especially want to support the fund 'Fair Aid' because we were shocked and saddened by the death of the Alexandrov Ensemble and Dr. Lisa, who showed us a bright example of serving God and the people."

© Sputnik / Kirill Kallinikov
'She Was a Miracle, Envoy of Kindness': Russian Charity Activist Dr. Lisa Among Passengers of Tu-154 Crash in Black Sea
Elizaveta Glinka, also known as Dr. Lisa, was the head of Spravedlivaya Pomoshch (Fair Aid) charity, before she died on December 25, 2016 when a Russian Defense Ministry plane heading to Syria crashed near Sochi. The crash took the lives of 91 others, including eight crewmembers, 64 musicians of the Alexandrov Ensemble, nine reporters, and two federal civil servants.

Dr. Lisa, whose organization provides medical assistance to cancer patients, was well known in Russia and Ukraine for helping people in dire need. She established the first hospice in Kiev, rescued children from the war zone in Ukraine, and received a human rights achievement award decreed by Russian President Vladimir Putin in December.

"We will also donate a portion of the funds to the Donetsk charity fund 'Dobrota' to support the children who have become victims of war in eastern Ukraine," Potapov said. "Some of the money we will leave for the church’s fund to help people throughout the year who come to us and asked for help."

Tatiana Day, traditionally celebrated on January 25, was established in 1755 by Empress Elizabeth, daughter of Peter the Great, after founding the University in Moscow. In modern times, Tatiana Day has become widely celebrated by Russia’s millions of students because it marks the end of winter exams and the start of a two-week vacation.