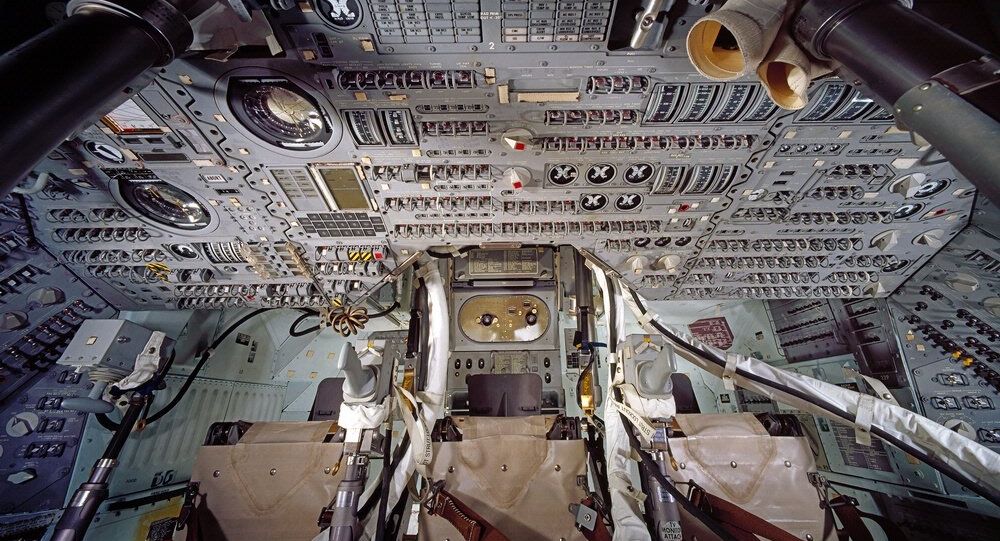 To commemorate the 50th anniversary of the tragic death of the three astronauts who were supposed to be the first people on the moon, NASA has placed the hatch from the Apollo 1 spacecraft capsule on display.

© NASA . Bright Insight
Paging Men in Black: NASA Cuts Live Feed After Object Appears on ISS Camera
Half a century after America's first space tragedy, the National Aerospace Agency has put a part of the Apollo 1 capsule on display. While most of the capsule remains in a special storage unit at Langley Research Center in Virginia, the hatchway door — arguably the most symbolic part — will be displayed for public view at Kennedy Space Center in Florida.

"I'm just so pleased that they finally decided to do something — visibly — to honor the three guys," said Chaffee's widow, Martha. "It's time that they show the three who died in the fire appreciation for the work that they did."

The January 27, 1967, tragedy involved three astronauts: veteran Virgil Grissom, first American spacewalker Ed White, and rookie Roger Chaffee, as they participated in a countdown rehearsal at Cape Canaveral's Launch Complex. The capsule that housed the three men suddenly became engulfed in smoke, from the inside. With only seconds to report the fire and open the hatch, the operation took too long, and the astronauts died.

An investigation determined the most probable cause of the fire was an electric arc from defective wiring.

The death of the three astronauts made NASA completely overhaul its Apollo 1 spacecraft, introducing many safety innovations, including a fireproofed capsule that was no longer pumped with pressurized pure oxygen on the ground, and, most importantly, a redesigned hatch with a quick release. The upgraded spacecraft design successfully took 24 astronauts to the Moon, allowing for a human to walk on the surface of Earth's only natural satellite.

© Flickr / Rob D. Kim (We Came In Peace)
Calling Pink Floyd: Apollo Astronauts Heard Extraterrestrial Music on Far Side of Moon
The three sections of the original Apollo 1 hatch will be displayed alongside the redesign. The original part underwent some preservation procedures, but has not been significantly altered.

There was controversy over whether the exhibition should take place, according to a Japan Times report. At the time of the tragedy, NASA preferred to bury the accident, as failures were viewed as unpatriotic during America's space race with the former Soviet Union.

The incident later became overshadowed by the 1986 Challenger and the 2003 Columbia explosions.

The families of the Apollo 1 astronauts persuaded NASA to dedicate an exhibit to the accident.

"This is way, way, way long overdue. But we're excited about it," said Scott Grissom, the legendary astronaut's son.

This historical newsreel reports the accident just after it took place in 1967: