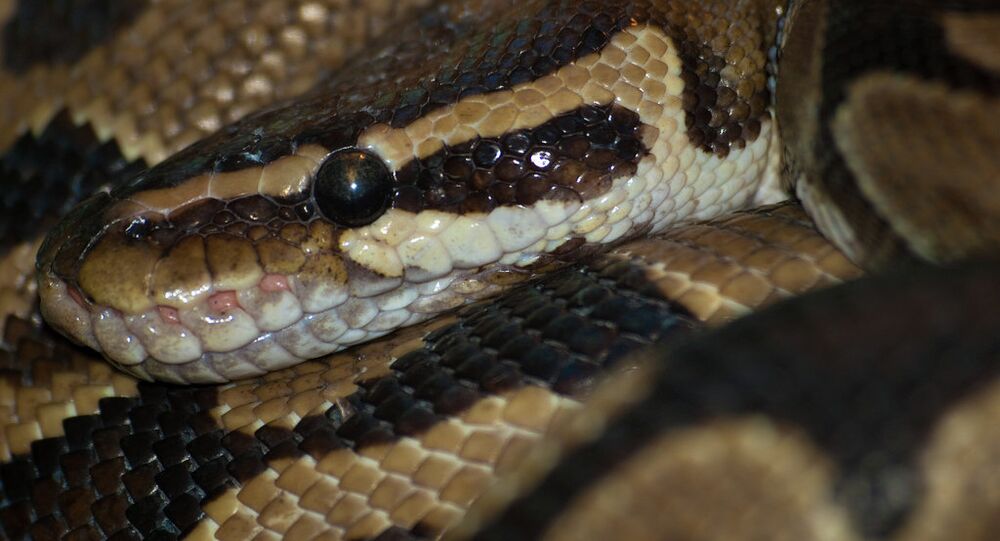 Florida has tried everything from radio tagged "Judas" snakes, trained dogs and hunters from around the world to get rid of Everglades of Burmese pythons. It has now dialed India's famed snake catcher duo which has already eliminated 14 pythons in little over a week.

NEW DELHI (Sputnik) — Two Indians are currently on a mission to eliminate thousands of Burmese pythons that have invaded the tropical wetlands in southern Florida, US. The duo was roped in the mission by the Florida Fish and Wildlife Conservation Commission (FWC) after hundreds of snake catchers from all over the world who participated in last year's "Florida Python Challenge" could eliminate only 106 pythons.

YouTube/ ViralHog
Snakes in the Toilet No Big Deal in Thailand

Masi Sadaiyan and Vadivel Gopal, from India's famed snake catcher tribe "Irula", reached Florida in early January. Since then they have netted 14 pythons including a 16-feet monster female holed up in the ruins of the old Nike missile base on Key Largo, according to the Miami Herald. The middle-aged duo, along with a group of biologists, travel to the Everglades daily, armed with just iron rods which they use to punch through thick bushes and limestone rocks.

Their mysterious techniques have left researchers astounded. Since the cryptically patterned snakes easily disappear into marshes that are nearly impossible to search, the Indian duo strategically mark out areas where they can be easily caught by recognizing the alarm cry of prey species to confirm occupancy.

Then they move stealthily towards boulders and high grasses that line the levees to look out for snake skin for signs of their presence. Once they spot the python, they stop and squat for a quick prayer before going for the kill. The duo is expert at determining the python's sex, approximate size and even how long ago it was in the area.

Some figures suggest there are anywhere between 30,000 and 100,000 Burmese pythons in the Florida Everglades. Other than unbalancing the tropical forests' eco-system by feeding on mammals, the extremely large and fearsome species also pose a threat to the local population of nearby states.

While it is deemed impossible to completely wipe out the species from the area, biologists believe they could be quarantined. The snakes that are now loose in the Everglades were once pets. When they became too large to care for they were released in the wilds and since then, their population has registered an alarming growth.

Back home in India, the Irula tribe is credited for revolutionizing the treatment for snake bites. The skills of snake catchers, passed from generation to generation of the Irula tribe, are crucial for the production of anti-venom in India which has the world's highest number of deaths from snake bites. They mainly catch the "Big Four" venomous snakes: cobra, krait, Russell's viper and saw-scaled viper for venom extraction. They catch snakes and harvest their venom before returning them to nature.