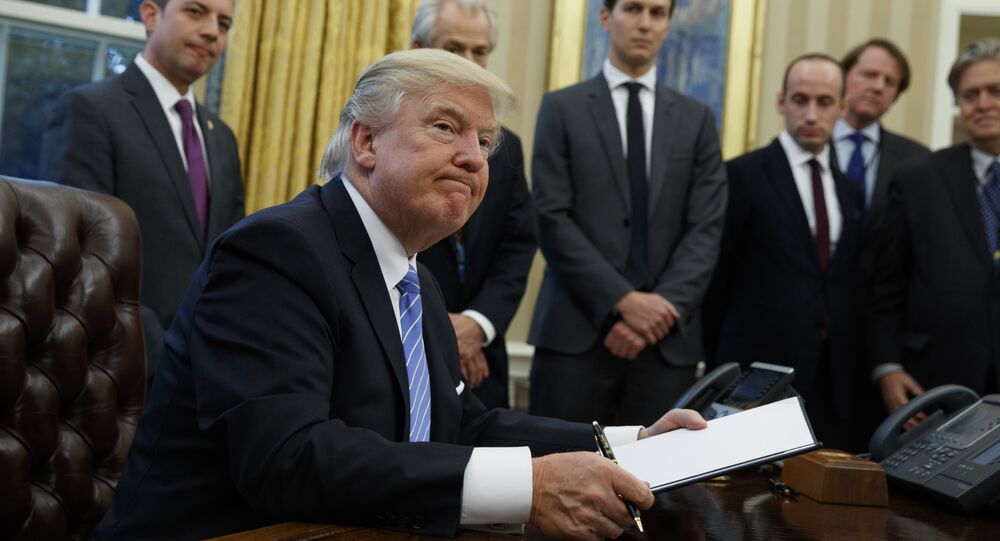 The Trans-Pacific Partnership (TPP) trade agreement is not viable without US participation as its remaining 11 member-states will not be able to work in concert without Washington, Moscow Carnegie Center’s political analyst Alexander Gabuyev told RIA Novosti.

On Monday President Donald Trump signed an executive order to formally end US participation in the TPP agreement fulfilling a campaign pledge to pull the United States out of the 2015 pact.

“The TPP will not be happening without the US because without America’s economic involvement the remaining member-states will simply not be able to meet the high standards they had agreed to in exchange for their duty-free access to the world’s biggest US market,” Alexander Gabuyev said.

“The US departure will upset the existing balance and I don’t think [the remaining 11 members] will manage to work in concert,” he added.

Many Chinese experts believe that the executive order President Trump signed off on Monday means that Washington will now be staking on bilateral trade agreements instead of the multilateral trade formats existing within the TPP.

© AFP 2020 / Timothy A. Clary
TPP Cannot Enter Into Force Without US - Canada’s Foreign Ministry
“The TPP is literally pushing China out, so Trump’s decision to call it quits favors China. However, his emphasis on trade protectionism will not be beneficial either to China or the relations between China and the United States,” Jin Canrong, a professor and Associate Dean with the School of International Studies at Renmin University of China, told RIA.

Tao Wenzhao, an expert with the Chinese Academy of Social Sciences’ Center for US-China Relations, pointed to President Trump’s opposition to the multilateral format of trade agreements signed by the TPP member-states.

“Trump plans to discuss the North American Free Trade Agreement (NAFTA) with Mexico and Canada, he has ditched the TPP and he doesn’t like the WTO, hence his dislike of the multilateral format of trade agreements. He will find it much easier to clinch agreements favoring the US through bilateral deals as part of his “America first” idea,” he said.

The United States, Japan and ten other Pacific Rim nations, representing roughly 40 percent of the world's economic output, signed up to the TPP in February 2016.

© AFP 2020 / FRED DUFOUR
China Voices Readiness to Lead World in Free Trade After US' Pullout From TPP
The pact aimed to create a free trade zone in Asia and the Pacific, deepen economic ties between the participation countries, slash tariffs and foster trade to boost growth.

Donald Trump earlier promised to end US participation in the 12-nation pact immediately after he took office as the 45th President of the United States.

The Trans-Pacific Partnership trade agreement, viewed by the Obama Administration as a key element in America’s economic competition with China, was never ratified by Congress.

Can You Kill a Corpse? Trump Leaves TPP - What's His Economic Policy?

TPP Cannot Enter Into Force Without US - Canada’s Foreign Ministry