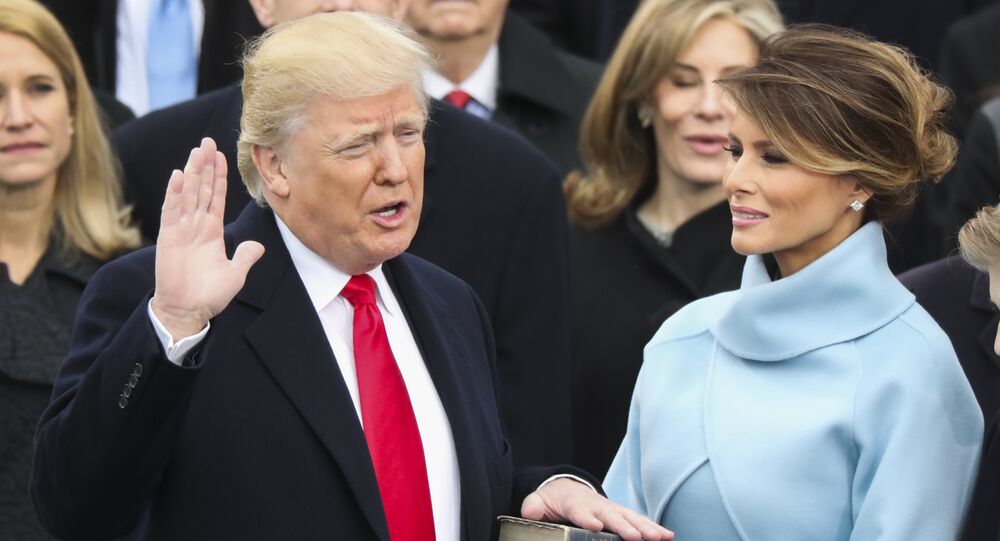 WASHINGTON (Sputnik), Martin Sieff — Small, scattered protests took place on Friday, Sputnik reported, around central Washington a few blocks from the White House. The windows of a Starbucks were smashed in and an empty limousine was set ablaze. 217 people were arrested in all, the city’s interim police chief said in a press conference.

However the protests were very small and peripheral compared to the vast crowd of up to 900,000 people, by some estimates, who turned out on Washington’s Mall in mild, slightly wet weather to see Trump take the Oath of Office from Supreme Court Chief Justice John Roberts at noon.

TRUMP PROMISES TO SEEK PEACE, COOPERATION AROUND THE WORLD

Trump pledged to follow a policy of peace and cooperation with other nations around the world and explicitly rejected any attempt to force US political models and judgments on the governments of any other country.

"We do not seek to impose our way of life on anyone, but rather to let it shine as an example for everyone to follow," Trump stated in his inauguration speech. "Peace through strength will be at the center of [our] foreign policy. This principle will make possible a stable, more peaceful world with less conflict and more common ground."

© REUTERS / Jim Bourg
US President Trump Pledges Not to Impose American Way of Life on Other Nations (VIDEO)
Trump, however, also repeated his determination to eradicate Daesh, working in cooperation with other nations around the world.

"We will reinforce old alliances and form new ones and unite the civilized world against radical Islamic terrorism, which we will eradicate completely from the face of the Earth," Trump claimed.

Trump also vowed to restore unity across the United States and to work for the forgotten people in US society, while condemning all forms of bigotry.

"When you open your heart to patriotism, there is no room for prejudice. The Bible tells us, ‘How good and pleasant it is when God's people live together in unity,’" Trump noted.

After taking lunch at the Capitol, Trump and his wife Melania rode in his limousine surrounded by Secret Service guards down Pennsylvania Avenue to take the reviewing stand for the traditional Inauguration Parade.

Marching bands from high schools all across the United States participated in the 90-minute long parade, shorter than the much longer festivities Obama had approved.

TRUMP TAKES ACTION ON DAY ONE

The new Trump era immediately made its presence felt on the official White House web site. Obama had prominently displayed on the web site a Department of Labor report on lesbians, bisexuals, gays and transgender (LGBT) people in the workplace. It was gone by Friday afternoon.

© Flickr / Gage Skidmore
Trump Orders Freeze on Regulatory Changes Until Cabinet Heads Confirmed
Obama had regarded his efforts to complete international agreements to reduce greenhouse gases and combat global climate change as among his most important achievements. That was immediately removed from the White House web site too and was replaced by Trump’s America First Energy Plan.

At some time on Friday morning, Trump also received a secret briefing from senior officers of STRATCOM, US Strategic Command based in Omaha in the US state of Nebraska on his custodianship of "the football" that contains every US president’s command capabilities to wage nuclear war.

Trump, before the evening festivities, signed a few executive orders in the Oval Office of the White House. One revised Obama's controversial Affordable Care Act to allow insurance companies to compete with each other across US state lines to offer coverage.

© AP Photo / Mark Tenally
Trump Celebrates Inauguration at 'Liberty and Freedom' Ball
The first of the official inaugural galas begun just under an hour late after Trump worked on the Executive Orders. Two of the balls took place in the same Walter E. Washington Convention Center on different floors with Trump and his wife Melania moving from one to the other Trump and his wife planned to open the dancing to the music of Frank Sinatra's "My Way".

The Rockettes from Radio City in New York and the band Pelican 212 led the musical acts with hit music from the 1960s.

The Trumps are scheduled to then attend the Salute the Our Armed Services Ball to honor military veterans, former troops wounded in combat, military families and first responders.