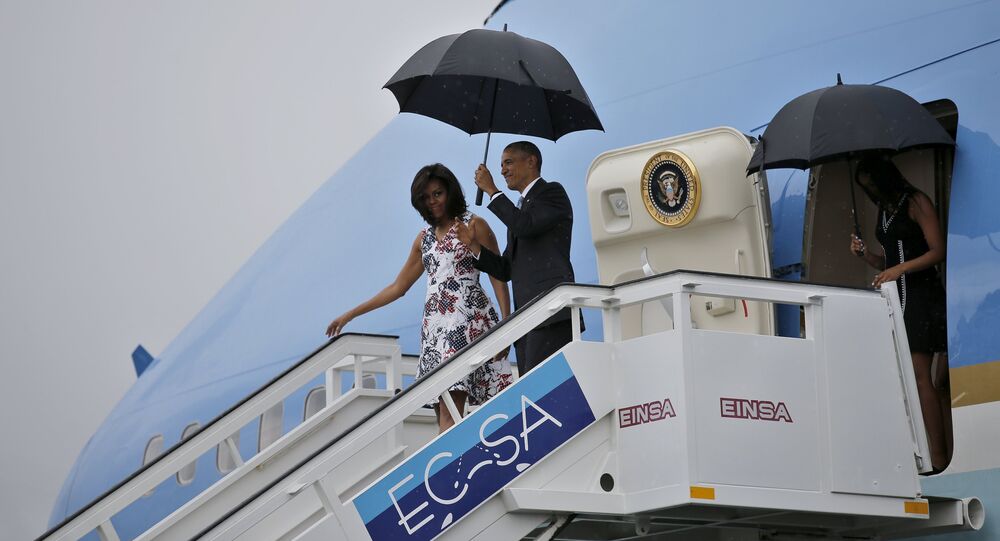 Michelle Obama, the first lady of the United States over the past eight years, is leaving the White House on Friday morning after the end of her husband’s tenure as the US president.

© AFP 2019 / NICHOLAS KAMM
Obama 'Worried About His Legacy,' As Trump Begins Process of Dismantling It
WASHINGTON (Sputnik) – She will be remembered as a fashion and style icon and an open, easy and strong woman committed to her beliefs.

Michelle LaVaughn Robinson Obama was the first African-American first lady in the history of the United States.

During her eight years in the White House, she has basked in love of many US citizens who saw her as bright and confident person that could make people laugh and was not afraid of being funny. She loses the title of the first lady with the same popularity level as when she started – 68 percent. She has not disappointed the country’s nationals and has upped the standard for future wives of US presidents.

"You made the White House a place that belongs to everybody," Barack Obama said about his wife in his farewell address. The Obamas have managed to make the White House less formal and to modernize it without harming its historical value.

'GIRL FROM THE SOUTH SIDE'

Michelle Obama was born on the South Side of Chicago to a worker’s family of modest means. She loved to read, write fiction, and play the piano. Working against all odds, Michelle and her older brother Craig enrolled in the prestigious Princeton University. After graduating from Harvard Law School, Michelle Obama worked for a large law firm where she met a young man whose name struck her as odd. The man was Barack Obama. Before moving to the White House, Ms. Obama worked as an associate at a law firm, was an assistant to the mayor of Chicago and developed the Community Service Center at the University of Chicago.

She gave up her career when she moved to Washington, but she has never stopped working. The position of the first lady is a demanding job, even though it comes without compensation. First ladies become, or fail to become, useful depending on their own interests and the spirit of the times. It came naturally to Michelle Obama, who "took on a role [she] didn’t ask for," as Barack Obama said, to devote her time in the White House to children and what every mother cares for – healthy eating and education.

Michelle Obama has said many times that her children are her priority in life and at the White House. The Obamas’ first daughter, Malia, was born in 1998. Three years later, they had their second child, Natasha Obama, simply known as Sasha.

Michelle admitted in many interviews that she was not thrilled with the idea of her husband running for president. "No way!" was her response when Barack brought it up. Michelle said she was afraid to subject the family to the presidency’s workload.

Since the very first days, she established an order, according to which her daughters were given freedom in their "children’s obligations." She immediately explained to the White House staff that Malia and Sasha would be making their own beds each day.

Michelle always took charge of her daughters’ upbringing, with assistance from her mother, Marian Shields Robinson, who lived with the family in the White House for both presidential terms of Michelle's husband.

The fact that their daughters’ education was the highest priority became obvious again when last week, during President Obama’s farewell speech in Chicago, his youngest daughter Sasha was nowhere to be seen. Social media were buzzing "What happened to Sasha?" The answer was that she stayed in Washington to prepare for a school exam.

Over the eight years, the Obamas managed to protect their children from unnecessary attention from the press, and the media mostly published photos of the president’s daughters that were taken by White House photographers. The parents also limited Sasha’s and Malia’s social media activity. The Obamas tried hard to provide a normal childhood for the girls despite their growing up in the White House. The girls invited friends to a slumber party and only once, in 2016, they appeared at a state banquet in honor of Canadian Prime Minister Justin Trudeau.

US Navy / Chris Oxley
US Navy Gets a $2.7 Billion Present from Michelle Obama

It was because of the girls that the family decided to stay in Washington for at least another couple of years, until Sasha graduates from high school. Malia, who finished high school last year and was accepted to Harvard, would begin her university studies in the fall.

During her first spring as the first lady, Michelle Obama, a qualified lawyer, started growing vegetables on the southern lawn of the White House. She involved both her daughters and children from city schools to participate in the cultivation of nutritious organic vegetables.

The first lady's campaign for healthy eating found its way into legislation. She had successfully lobbied for a bill to improve the quality of school meals and expand access to the meals to low income families.

The healthy eating campaign developed into a new project aimed at reducing childhood obesity. The first lady put great effort into the program with her personal example. She would regularly be seen on TV dancing, working out, showing off her physical fitness and good shape.

Later, she also took charge of girls’ right to education and toured several countries with this initiative. Her daughters joined her on some trips.

Leaving the White House, the first lady made sure her garden would be maintained by future administrations.

© Sputnik / Aleksey Nikolskyi
Putin, Obama Have No Plans for Contacts on Trump's Inauguration

"I’ve never been the former first lady of the United States before but I will always be engaged in some way in public service and public life," Michelle Obama said, adding that she did not know yet how and where she would fulfill her calling. Right now she only knows that, despite what some might hope for, she has no intention of running for president.

"She never fully embraced being in the public spotlight, which is ironic, given how good she is," the outgoing president said about his wife in one of his farewell interviews.

Many people said that Michelle Obama knew how to be at once lively and emotional and at the same time very convincing, winning over audiences where others in her or her husband’s entourage had failed.

The first lady revealed her qualities as a politician most fully during Democratic candidate Hillary Clinton’s presidential campaign. Michelle Obama’s speech in Clinton’s support made a mark and injected new energy and support into Clinton's campaign.

"What strikes me about Michelle Obama is how much she made the position her own," Allida Black, the first ladies' historian for the White House Historical Association, said. "She […] became increasingly influential as First Lady in ways that really were her own."

THE POWER OF STYLE DIPLOMACY

Michelle Obama arrived in the White House in an inexpensive cardigan and with the conviction that clothes should be agreeable and comfortable. Her personal style won her many glossy magazine covers. People wrote analytical studies on her fashion choices and the public followed her wardrobe with as much attention as they followed her husband’s statements.

"She realized very early that everything she did had ramifications," said Thom Browne, who made the clothes Michelle Obama wore for the inaugural parade in 2013, as well as the dress she wore to the 2012 Democratic National Convention (DNC), in an interview with The New York Times. "She understood that people did not just want to know how she looked, but what she was about."

The New York Times noted that, unlike her predecessors, Michelle did not tie herself to one or two favorite brands or designers, but appeared in clothing from more than 40 designers from around the world, and at the same time, was not above wearing common clothes with ordinary labels.

"You see, our glorious diversity – our diversities of faiths and colors and creeds – that is not a threat to who we are, it makes us who we are," Michelle Obama said in her final speech as the first lady.

© Photo : Jaclyn O'Laughlin
Obama Slams Notion of Voter Fraud in US as an Example of Fake News

By not limiting her choice of fashion designers, Michelle Obama created her own "diplomacy of style." She often met with foreign leaders while wearing clothes designed by people from or with links to those countries.

On Friday, Michelle is set to leave the White House. The US presidential residence will be without a new mistress while US President-elect Donald Trump’s son Byron finishes his school year, which was the decision of Melania Trump, the new Mom-in-Chief of the United States.