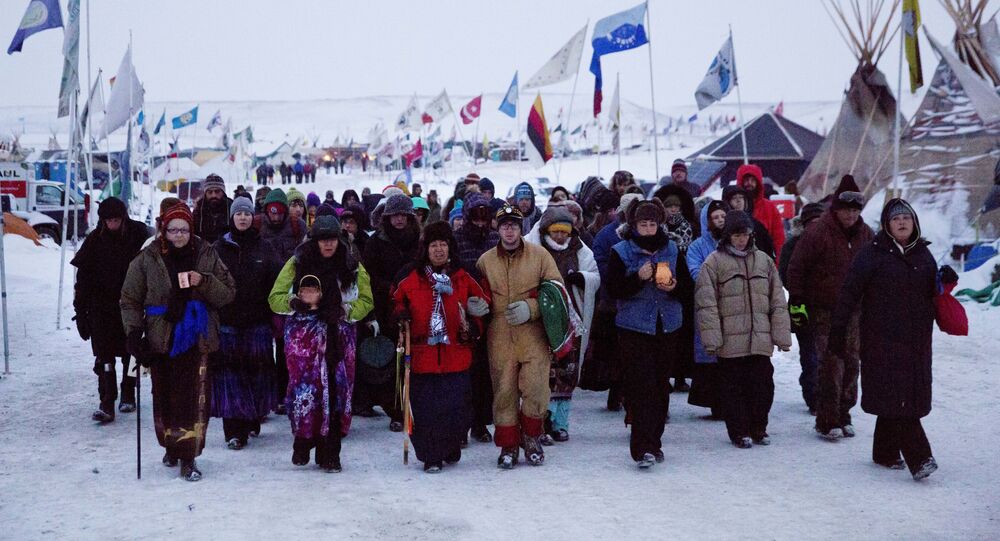 Dakota Access Pipeline demonstrators carried out protests for a third consecutive night near the construction site of the $3.7 billion development project where they set fires and assaulted officers, Mandan Police Chief Jason Ziegler said in a press release.

WASHINGTON (Sputnik) — Some 150 protesters assembled on Wednesday evening at the Backwater Bridge. In the ensuing four hours, protesters started three tire fires on the bridge and two fires on each side of the bridge, the release stated.

“Last night our officers faced the same type of hostility and aggression that we have been subjected to for the past six months, “ Ziegler stated on Thursday. “Rioters once again violated the December agreement to stay off the Backwater Bridge as they set fires and assaulted officers using a variety of materials including ice chunks, rocks, and other home-made projectiles.”

© AFP 2021 / Robyn BECK
Year in Review: Dakota Access Pipeline Protests Spark Clash Between Tribes, US Authorities
Six injuries were reported between law enforcement officers and National Guard soldiers of the US state of North Dakota, according to the release.  Authorities made 21 arrests, bringing the total number of arrests to 624 since protest activity began on August 10, 2016, the release stated.

The nearly 1,200-mile pipeline is intended to transport domestically produced light crude oil from North Dakota through the states of South Dakota and Iowa into Illinois. Last month, the US Army Corps of Engineers decided to halt final-stage construction of the pipeline because of environmental concerns.