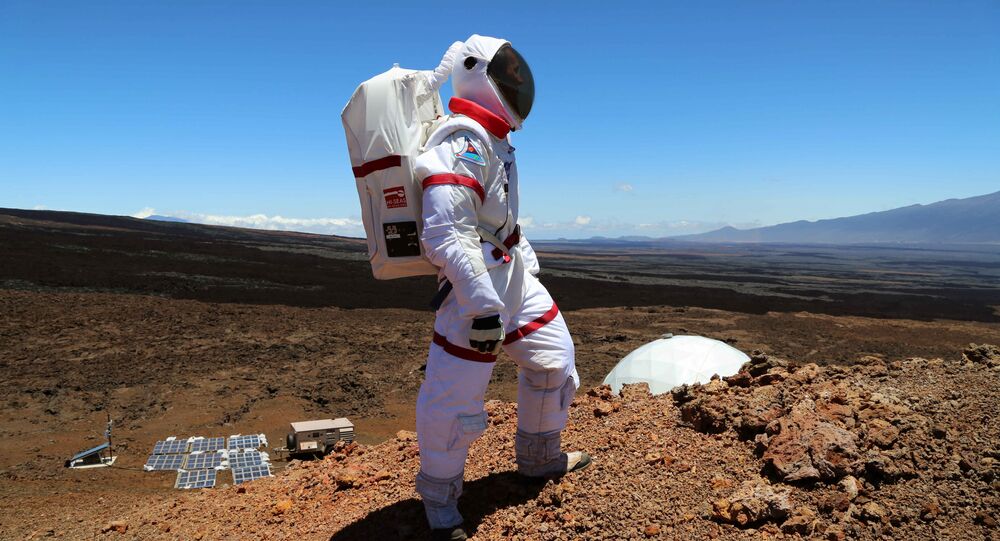 Six NASA researchers are set to lock themselves on a Hawaiian volcano for the next eight months, to assess the psychological impact of a lengthy stay in isolated, confined conditions similar to an off-planet outpost, in preparation for an eventual scientific colony on Mars.

The Hawaii Space Exploration Analog and Simulation (HI-SEAS), a $2-million joint venture between NASA and the University of Hawaii, is built atop Mauna Loa, the world's largest active volcano, chosen because it has a rocky red geography similar to Mars.

Although they will not leave Earth, the researchers will be placed under circumstances that simulate life on Mars. If they leave the compound, they will wear space suits, and their diet will consist primarily of freeze-dried foodstuffs.

The six researchers will have no direct contact with their surroundings. They will be able to communicate with the outside world, but with a twenty-minute delay (the same amount of time it takes a message to reach Earth from Mars). The only outside material to enter the testing ground will be through the use of a resupply robot.

Biometric collars have been issued to the researchers to monitor mood and proximity to the rest of the team. NASA hopes to learn more about the effects of isolation and confinement on the human mind.

"We're hoping to figure out how best to select individual astronauts, how to compose a crew and how to support that crew on long-duration space missions," said project lead Kim Binsted with the University of Hawaii, who will operate the facility.

The research team to be locked within Mauna Loa was chosen from a group of 700 applicants based on the results of cognitive and personality tests, as well as extensive interviews.

"When I started, my biggest fear was that we were going to be that crew that turned out like Biosphere 2, which wasn't a very pretty picture," said mission commander James Bevington.

Biosphere 2 was a closed ecological system built in the 1990s to demonstrate the viability of man-made environments for supporting human life. The ambitious project was plagued with difficulties, one of which was that the researchers sealed inside succumbed to cabin fever and fought among themselves.

Humans are known to undergo severe stress when placed in unfamiliar and isolated surroundings. Living in harsh conditions, 19th-century American pioneers were known to suffer "prairie madness" when they found themselves thousands of miles from civilization, causing them to become depressed, withdrawn, violent, and even suicidal.

The latest expedition is the fifth HI-SEAS mission. A sixth is planned for 2018. The previous mission within Mauna Loa ended in August 2016, and lasted one year, the second longest Martian simulation to date.

The longest, lasting 520 days, took place in 2011, in a joint collaboration between the European Space Agency, the China National Space Administration, and Roscosmos.

"Since 2012, HI-SEAS has been contributing to NASA's plans for long-duration space exploration. We are an international collaboration of crew, researchers and mission support, and I'm proud of the part we play in helping reduce the barriers to a human journey to Mars," said Binsted.

NASA hopes to launch an extended manned mission to the red planet sometime in the 2030s. Hopefully no astronauts on that mission will meet the same fate as Matt Damon's castaway in the 2015 film The Martian.

Euro-Russian Mars Lander May Have Exploded Due to Software Glitch