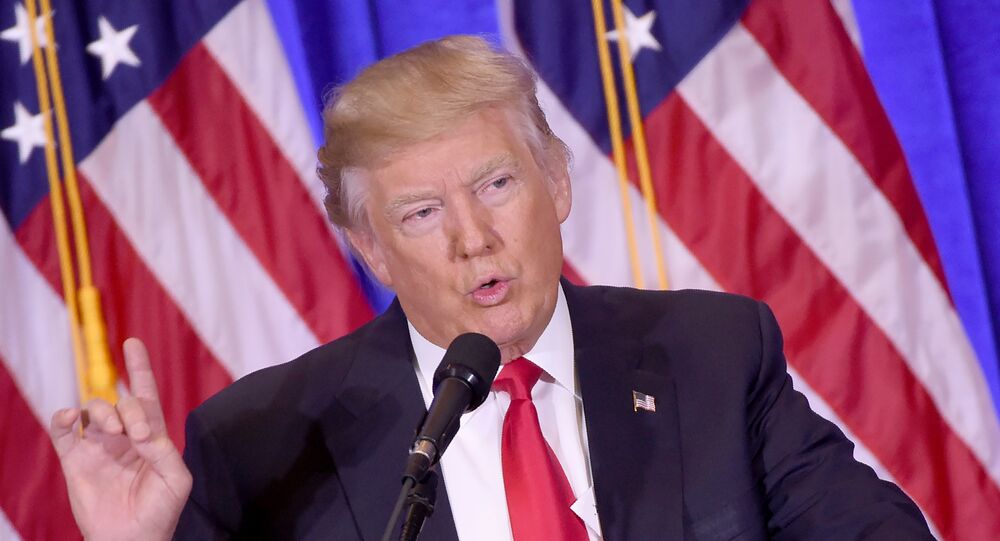 US President-elect Donald Trump shared his views on US foreign policy and its priorities with The Times and Bild newspapers on Sunday.

© REUTERS / Carlo Allegri
Trump to Approach US-Russian Relations With ‘Fresh Eyes’ – US Vice President-Elect
MOSCOW (Sputnik) — US President-elect Donald Trump shared his views on US foreign policy and its priorities, including possible US-Russian deal on nuclear disarmament which could lead to lifting sanctions imposed on Russia, in an interview with The Times and Bild newspapers on Sunday.

Trump said that the top priority for the US Armed Forces would be the fight against Daesh, outlawed in many countries, including Russia.

The president-elect, however, refused to provide any details concerning the way how the United States would be fighting against the Daesh, reminding that the Mosul liberation operation turned out to be catastrophic, since the US-led coalition had announced the launch of the operation long before the operation started.

The US president-elect said that he would trust German Chancellor Angela Merkel and Russian President Vladimir Putin, but it might not last long.

"Well, I start off trusting both — but let’s see how long that lasts. It may not last long at all," Trump said.

© AP Photo / J. Scott Applewhite
Who'll Be the Last Man Standing in Trump's War With the Neocons Over Russia Policy?
He added that the sanctions against Moscow could be lifted if Russia and the United States reached an agreement on nuclear disarmament.

"They have sanctions on Russia — let’s see if we can make some good deals with Russia. For one thing, I think nuclear weapons should be way down and reduced very substantially, that’s part of it. But Russia’s hurting very badly right now because of sanctions, but I think something can happen that a lot of people are gonna benefit," the US president-elect said.

As for Merkel, Trump noted that German open-door policy toward refugees was "one catastrophic mistake."

Trump stressed that NATO was an important organization, but it had to be reformed.

"I said a long time ago that NATO had problems. Number one it was obsolete, because it was designed many, many years ago. Number two, the countries aren’t paying what they’re supposed to pay. I took such heat, when I said NATO was obsolete. It’s obsolete because it wasn’t taking care of terror," the US president-elect said.

He also noted that there were only five member states among 22 which paid for the protection provided by the United States and that was unfair.

© REUTERS / David Becker/Nancy Wiechec/Files
Clinton is 'Guilty as Hell': Trump Returns to His Campaign Rhetoric
During the interview Trump called on the United Kingdom to veto any anti-Israeli resolutions concerning the Israeli-Palestinian conflict, since he was not sure whether the United States would do it.

On December 23, 2016, the UN Security Council passed a resolution condemning Israeli settlements in the West Bank and East Jerusalem in a 14-0 vote. The United States was the only country that abstained from the vote and did not use its veto. The resolution states that Israel should immediately and completely cease all settlement activities on "occupied Palestinian territory," including in East Jerusalem.

According to The Times, Trump also confirmed that he would appoint his son-in-law Jared Kushner as a broker to the Middle East peace settlement process.

TRADE DEALS WITH UK AFTER BREXIT

Trump praised the UK decision to leave the European Union and promised to sign a new trade deal with Britain, which would mitigate the consequences of Brexit.

© AP Photo / Evan Vucci
Democratic Lawmaker: Trump Won ‘Fair and Square’ but Lobbies Electors to Vote Clinton
The US president-elect criticized the European Union for accepting a huge number of migrants that prompted Brexit and added that it would potentially force other countries to leave the union.

"I do believe this, if they [EU countries] hadn’t been forced to take in all of the refugees, so many, with all the problems that it… entails, I think that you wouldn’t have a Brexit. It probably could have worked out but this was the final straw, this was the final straw that broke the camel’s back… I think people want… their own identity, so if you ask me… I believe others will leave," Trump said.

On June 23, 2016, the United Kingdom held a referendum to determine whether or not the country should leave the European Union. According to the final results, 51.9 percent of voters, or 17.4 million people, supported Brexit.

In November 2016, Trump won the US presidential election by gaining a major electoral lead over his rival, Democrat Hillary Clinton.

The inauguration of the US president-elect will take place on January 20.