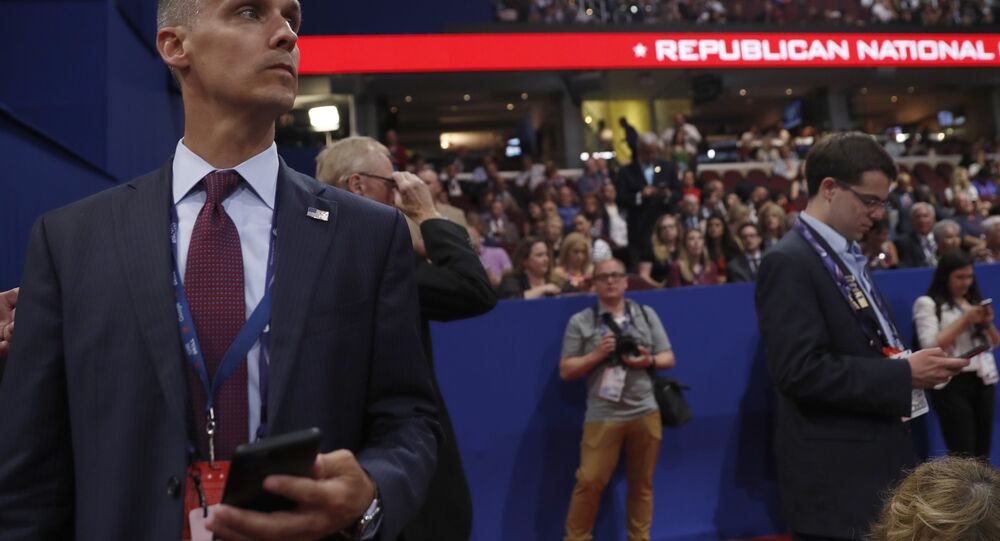 The right-leaning One America News Network (OANN) has been rapidly expanding since their launch in 2013, with a website boasting that the young network is already close to becoming the number-four cable news channel in the nation.

Lewandowski made headlines multiple times last year, most notably after an encounter with journalist Michelle Fields during a Trump campaign event.

Fields, a former-Breitbart writer, claimed on Twitter that during the presidential campaign Lewandowski forcefully grabbed her arm as she approached Trump with a question. She went on to file charges, which the police ultimately dropped. Fields later claimed that she did not intend to go to law enforcement over the issue until it became it a national scandal.

Trump defended and stood by Lewandowski throughout the flareup.

Still, Lewandowski departed Trump’s campaign, but infuriated the left once again by briefly accepting a position as a CNN pundit. He left that network three days after the election, which prompted many to speculate that he would have a role in the White House.

OANN president Charles Herring told Sputnik News in an email that his network had actually approached Lewandowski with an offer in June 2016, but were unsuccessful in working out a deal. He stated that “Mr. Lewandowski joined CNN to our disappointment.”

“Corey is fulfilling a similar role to his former position on CNN, namely providing insight and perspective on political news. Our audience appreciates intelligent and informative insight and discussions, regardless of any specific point of view on a topic,” Herring told Sputnik News.

In a recent appearance on OANN, Lewandowski urged mainstream media to be more responsible when it comes to reporting fake news, specifically addressing the wild claims in the ‘Golden Showers’ report irresponsibly published by Buzzfeed.

“Well, Mr. Trump was clear, he was very disappointed that these false news stories were perpetuated in the mainstream media without ever being able to validate it,” Lewandowski said. “What we now know is that they were wholly and grossly inaccurate, they should have never been brought to light, and there was no basis for them whatsoever.”

Lewandowski stated that some of the stories published by the media recently are not qualified to be printed in a supermarket tabloid, asserting that everyone needs to do a better job at presenting facts.

© REUTERS / Lucas Jackson
'Tremendous Blot on Their Record' - Trump Slams Intel Community for Endorsing Fake Report
Naturally, Trump-opposing websites and political commentators have responded to the news of OANN’s latest addition to their roster with a mixture of snark and disdain, but Herring says that they have only seen favorable comments from their viewers.

“One America News is expanding our live news coverage and is hiring for numerous positions,” Herring said. “The network is producing 21 hours of live news per day.”

On Wednesday, another reporter from OANN, Trey Yingst — who’s on-the-ground coverage from riots to inside the halls of Congress frequently gain global attention — managed to get a question in at Trump’s highly-anticipated press conference. An impressive feat, as the President-elect was extremely selective in who he chose to answer questions from.

DC-based Yingst asked Trump for his response to critics who say the President-elect’s cabinet is filled with “conflicts of interest,” and if he plans to set an example for his cabinet when it comes to taking money out of politics.

“We need people that are successful and they got successful because generally speaking, they’re smart. And that’s what I’d put, I’m very proud of the Cabinet, I think they’re doing very well,” Trump told the OANN reporter who was seated in the front row.

Having a friend of the incoming President on the team appears to be a far better place to be than, say, CNN, who was scoffed at by Trump, as “fake news,” minutes later.

Who'll Be the Last Man Standing in Trump's War With Neocons Over Russia Policy?