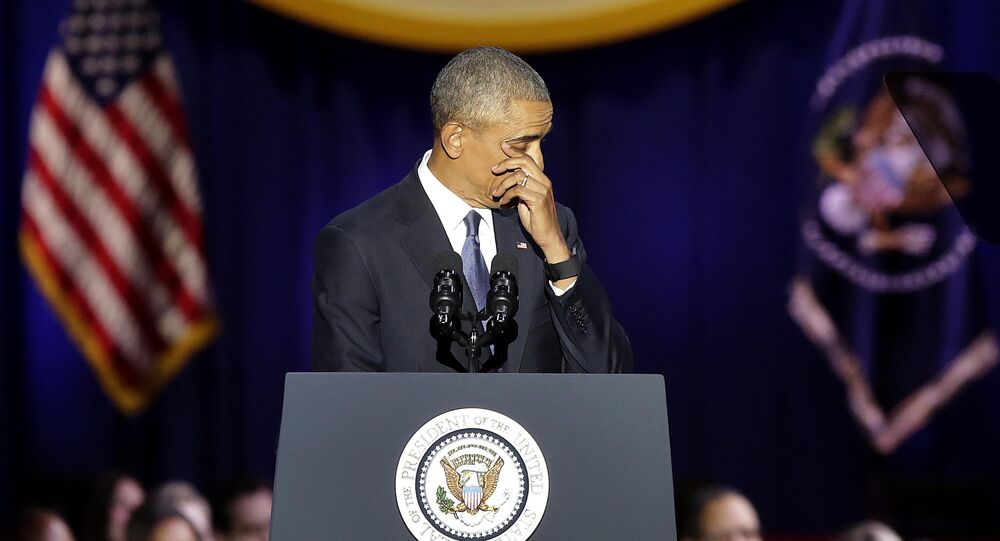 'No, You Couldn't': Americans on Obama's Failure to Deliver on His Promises

Barack Obama has delivered his farewell address to the nation, ending his final speech with the very same motto he used during his presidential campaign: "Yes We Can." However, media reaction to his speech was quite the opposite. Sputnik discussed Obama's legacy with Paris Dennard, political and social commentator and former White house staffer.

In an emotional display of words that went on for almost an hour, the outgoing US president sounded more like he was speaking back in 2008 during his campaign.

© REUTERS / Jonathan Ernst
Obama's Farewell Tears Are an Insult, His Record is Soaked in Blood
He ended his final speech with the very same motto he used during his presidential campaign – Yes We Can — and by thanking US citizens for their support.

Obama is leaving office as a relatively popular president — with opinion polls giving him a favorability rating among voters of between 55 and 57 percent.

Fewer than half say they are better off than they were when the Democrat entered the White House in 2009, and two-thirds of Americans believe Obama was unable to keep his election promises.

National Review magazine described the final address as "a great deal of vague and fruity talk about 'hope and change,' very little of genuine interest, and an undercurrent of bitterness communicating his unshakeable belief that the American people just simply are not up to the task of fully appreciating History’s unique gift to them in the person of Barack Obama."

"[…] he is so terribly disappointed in us! Having just endured the electorate’s rejection of his party and his mode of politics with the election of Donald Trump, and grimly considering the likely dismantling of much of his executive-order legacy, President Obama gave a speech about how our democracy has failed and why. You’ll be something less than shocked to learn that his belief is that Americans are so beguiled and befouled by racism and prejudice that we failed to cultivate the sacred spark the Promethean president handed down to us," it further described the speech with bitter irony.

"Oh, and we watch too much Fox News and read too many Facebook posts from that right-wing uncle of myth and lore, which deprives us of a 'common baseline of facts'," it added.

"First and foremost he will go down in history as the first African-American person to be elected the president of the US. We can't take it away from him. That was a historic feat. That is something that is memorable and will always be a part of his legacy," he told Sputnik.

Secondly, he said, it is going to be the so-called Obamacare, the Patient Protection and Affordable Care Act (PPACA), which he was able to introduce largely because of the support he had from the Congress led at that time by Speaker Pelosi.

However the expert said that it is going to be a mixed legacy because of the unemployment rate, especially for African-Americans. The question then arises: with the first African-American president, did he do enough to address some of the issues that impacted the African-American community in the US, namely about jobs, education, school choice, infrastructure?

There are many things, he said, that people would say he did not do or did not do enough for the black community.

© AFP 2020 / Eric FEFERBERG
Balloon With Snowden Photo Soars Above Statue of Liberty in a Message to Obama
The outgoing president is also going to be judged upon what is happening around the world. He said he was going to close down Guantanamo, promised to end two wars, however now we have the rise of ISIS (Daesh).

Under his watch we had the Benghazi incident, which lead to the death of the US ambassador to Libya, aggression in Egypt, Syria, the fractured relationship with Israel and Russia. And a lot of Americans felt left out during Obama's presidency, he stated.

So, it is very likely that there will be way too many people who will people will see off the outgoing president with very mixed feelings, he therefore said.

Obama Provides US Intelligence With Greater Access to Intercepted Communications