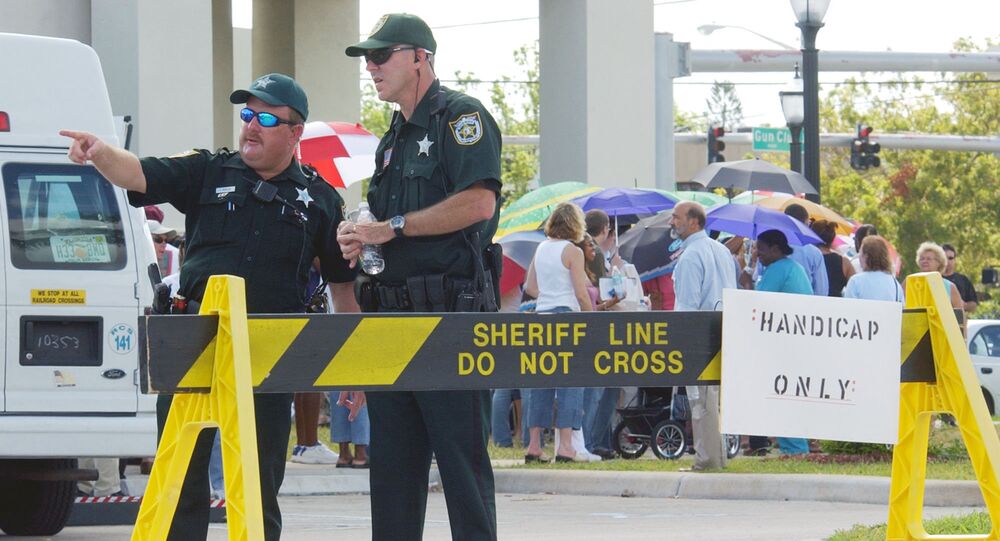 Federal marshals have seized the car and all belongings, including clothes, of a Palm Beach, Florida, police officer who shot an unarmed bicyclist in 2013, rendering him permanently paralyzed.

© REUTERS / Zachary Fagenson
At Least 45 Injured in Florida Airport Shooting, County Sheriff’s Office Says
Federal marshals have seized the car and all belongings, including furniture, home appliances and clothes of police officer Adams Lin, who shot bicyclist Dontrell Stephens in 2013, rendering him partially paralyzed and permanently unable to walk. Kin's property will be auctioned off to pay a first installment of the $22-million compensation awarded to Stephens.

Stephens, in the course of the 2013 tragedy, was riding his bicycle in a manner that Lin judged was illegal. As he testified later, Lin intended to give Stephens a traffic ticket, but also admitted that he was suspicious about the bicyclist and intended to frisk him. Four seconds after the car stopped, Lin shot four bullets at the unarmed man, one of which entered the victim's back, permanently damaging his spinal cord. Lin testified that he thought Stephens was armed, but an investigation determined that Stephens was only holding a cell phone.

Stephens was subsequently awarded a $22-million compensation package, of which some $6 million will go to pay for medical expenses over the course of his life, a figure that will be paid by the Palm Beach Sheriff's office, according to the NY Daily News.

According to Florida law, any payment above $200,000 must be authorized by Florida lawmakers, and that has not happened. Sheriff Ric Bradshaw has declined to pay even the first $200,000 installment, which does not require lawmaker certification, claiming that it is not required, as the verdict is currently on appeal.

© REUTERS / Toby Melville
UK Police Classify Home Secretary’s Speech on Immigrants as 'Hate Incident'
As a result of the department's refusal to pay even the non-authorized $200,000 sum, Stephens' attorney, Jack Scarola, turned to a federal judge to get money from Lin, and the judge approved the claim. Scarola said he warned the sheriff's office that he would seek to seize property if they refused to pay, to no avail. Lin's wages are protected by an earlier US Magistrate Judge's decision, as the officer provides more than half of child support for his 6-year-old-daughter.

The US Marshal Service came to Lin's home and seized everything that did not obviously belong to Lin's daughter, including an iron and ironing board.

"We left behind cups and saucers and dishes," he added. "There's nothing of any significant value in those."

When the marshals delivered the court order to Lin, he reportedly became visibly shaken and fainted, collapsing to the ground. Paramedics were called to help him recover.

"The judge… realizes the urgency that it is more important to try to get this young man some money so that he can offset some of these, I can only imagine what his medical bills are to date," said Stuart Kaplan, former FBI special agent.

Scarola explained that when Lin's belongings are sold at auction, a marshal's fee must be paid first, along with the fees for the movers, a storage facility, and a tow truck company and driver.

"If anything remains it begins to satisfy the […] judgment," Scarola said.

"I took no pleasure in having to do what we did, but we have an obligation to [act] for our client," Scarola said. "It was the only alternative open to us and definitely the right thing to do."

The president of the Palm Beach County Police Benevolent Association, John Kazanjian, was outraged by the court's decision and underscored that Lin was never criminally charged or punished for any wrongdoing by PBSO.

"This is a bad, bad precedent," he said.