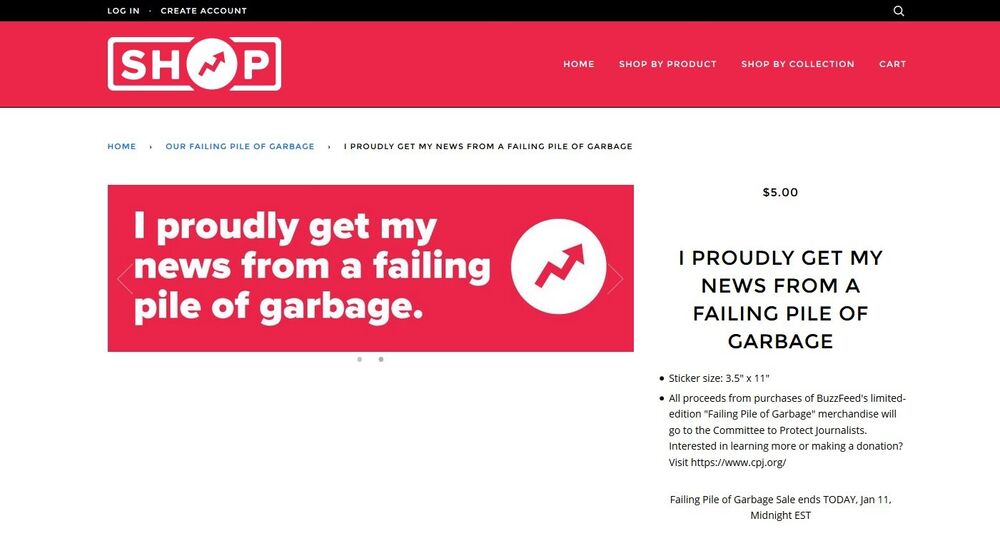 On Wednesday, President-elect Trump epically trolled BuzzFeed, calling it a "failing pile of garbage" over a fake report on his alleged sexual misadventures in Russia. Flustered by Trump's remarks, which blew up on social media, BuzzFeed made a sad attempt to turn things around, selling merchandise emblazoned with the epic phrase on their site.

On Tuesday, CNN reported on the existence of a two-page report claiming that Russia had compromising materials on the President-elect, supposedly given to Trump and to President Obama by US intelligence. Soon after, BuzzFeed published a 35 page document, which accused Trump of having a penchant for "sexual perversion." His lewd acts, the anonymous report claimed, included defiling a bed in a hotel suite in Moscow where President Obama had once stayed "by employing a number of prostitutes to perform a 'golden showers' (urination) show in front of him."

Soon after publication, BuzzFeed's 'revelations' enjoyed a brief moment of acclaim, before quickly being discredited. WikiLeaks called the report 'bogus', adding that it had absolutely 'no creditability', with other media outlets soon joining in to mock CNN and BuzzFeed. Even the New York Times castigated the journalists, suggesting that by publishing the report, they had stooped to the level of 'fake news'.

Trump's initial reaction was fury. Calling the story "a total political witch hunt" in all-caps on Twitter and suggesting that it was an effort to "belittle our victory with FAKE NEWS," Trump then turned his anger toward the intelligence community, saying that they "should never have allowed this fake news to 'leak' into the public, and asking "Are we living in Nazi Germany?"

At a press conference on Wednesday, Trump absolutely crushed BuzzFeed, calling them "a failing pile of garbage." As for CNN, the President-elect bluntly told its reporter to "be quiet," and said that he wasn't going to allow a question from a "fake news" organization. "You are fake news," Trump quipped.

Later, having fun with his audience before moving on to another subject, Trump also said that he was "very much a germaphobe," making the 'golden showers' allegations even more ridiculous.

Obviously embarrassed by the putdown and trying to make the best of a bad situation, BuzzFeed responded by releasing an 'ironic' collection of merchandise on their online shop, featuring, t-shirts, bumper stickers and, appropriately, a garbage can.

The sale lasted only until midnight on Wednesday for some reason, with the product description gushing to explain that "all proceeds…will go to the Committee to Protect Journalists," a New York-based non-profit. Judging by some Twitter users' suggestions amid the fallout from the fake news report, BuzzFeed may need some legal assistance of their own if Trump goes ahead and sues the news organization for slander.

Buzzfeed just perfected Fake News. They need to have their press credentials stripped and Trump should sue them into oblivion #FakeFeed

Donald Trump Should Sue BUZZFEED Into A Coma!: https://t.co/Fa9luHwpxV via @YouTube

On Wednesday, BuzzFeed founder and CEO Jonah Peretti defended the news site's decision to publish the documents, insisting that this was a "newsworthy document." As for the President-elect's criticisms, Peretti stated that "we are not going to respond to these divisive comments."

“We are not going to respond to these divisive comments,” he says re: Trump criticism. pic.twitter.com/O3SO7Z3k8G

On Thursday morning, Director of National Intelligence James Clapper confirmed that the documents cited by CNN and published by BuzzFeed have nothing to do with the US intelligence community. The Kremlin, meanwhile, called the latest allegations against Russia "another attempt to harm bilateral relations," adding that the report was obviously a laughable "hoax."