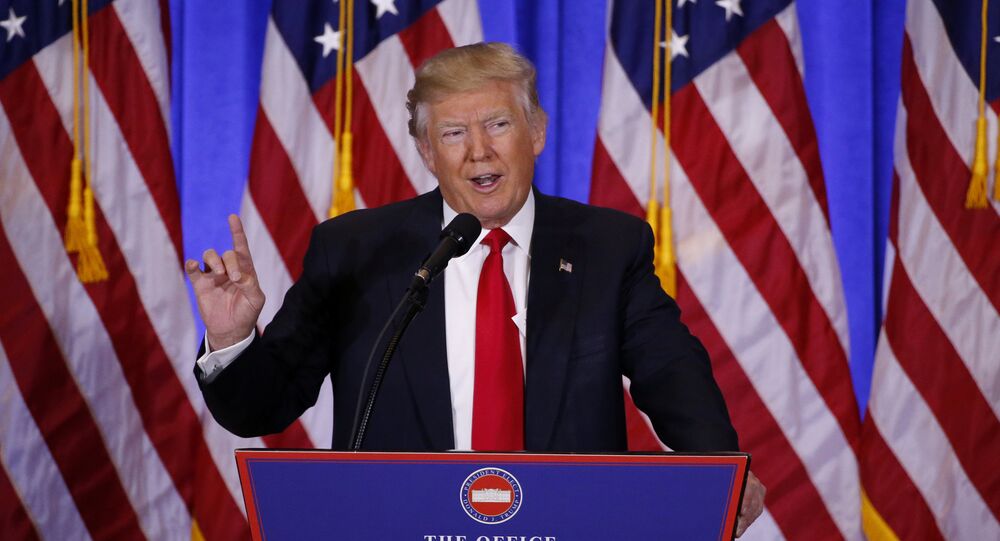 President-elect Donald Trump gave his first press conference in six months just nine days before his inauguration, and addressed the claims in the unsubstantiated and unconfirmed report released by Buzzfeed on Tuesday evening.

Prior to Trump speaking, incoming White House Press Secretary and Communications Director Sean Spicer addressed the Buzzfeed report. He referred to the outlet as a “left-wing blog that was openly hostile towards the president-elect’s campaign.” He also pointed out that Buzzfeed’s own editor noted that there are serious reasons to doubt the claims in the report, and called the decision to release it anyways “shameful and disgraceful.”

CNN claims that they published the information contained in the report because the CIA called it “credible,” though it is important to note that they did not call it “true.” The sloppy release by the two outlets was swiftly condemned by journalists and other news outlets, even those who openly oppose the president-elect.

“The fact that Buzzfeed and CNN made the decision to run with this unsubstantiated claim is a sad and pathetic attempt to get clicks. The report is not an intelligence report, plain and simple,” Spicer said.

© Flickr / Gage Skidmore
Trump Sex Blackmail, New Twist in Witch-Hunt
After being introduced by soon-to-be Vice President Mike Pence, Trump took to the stage and addressed the Buzzfeed report as well. He stated that if the fake report was released by the intelligence agencies, it will be a “tremendous blot on their record.”

While expressing his disappointment with the unprofessional attempt to smear him, Trump still reiterated his belief in the importance of the freedom of press.

Trump also spoke on jobs that are coming back into the nation and his plan to fix the Department of Veterans Affairs.

Taking questions from the public, Trump was immediately asked about Russia. He stated that while he is not allowed to comment on what happened in his intelligence briefing, as it is classified, the document released by Buzzfeed should never have entered paper — let alone been released to the public.

“I think it’s a disgrace that information would be let out, I saw the information, I read the information outside of that meeting. Its it’s all fake news, it’s phony stuff, it didn’t happen,” Trump said.

Trump noted that the document was obtained by his opponents, “sick people,” who “put that crap together.”

Earlier in the day, Trump had tweeted, "intelligence agencies should never have allowed this fake news to 'leak' into the public. One last shot at me.Are we living in Nazi Germany?" When asked about what he had wrote, Trump reiterated that it is disgraceful that the false report was leaked to the press.

Regarding the hacking of Clinton’s campaign staff and the Democratic National Committee, Trump stated that he thinks it was Russia. The president-elect quickly added that “we also get hacked by other countries and other people, and I can say that when we lost 22 million names and everything else that was hacked recently, they didn’t make a big deal about that,” referring to the OPM hack. Trump then stated that it was “probably China.”

Instead of speaking on retaliation, he stated that the nation needs to work on their defense — which he has promised to do.

“They tried to hack the Republican National Committee, and they were unable to break through,” Trump said. “We have to do that for our country, it’s very important.”

Trump also asserted that he respected the fact that Russian President Vladimir Putin came out earlier that morning to assert that the claims in the Buzzfeed report was completely false.

When asked about the claims that Putin had been attempting to help him defeat Hillary Clinton, Trump stood firm in his belief that a positive relationship would be a good thing.

“If Putin likes Donald Trump, I consider that an asset, not a liability,” he said. “We have a horrible relationship with Russia … Russia can help us fight ISIS, which by the way, is number one, tricky. I mean, if you look, this administration created ISIS by leaving at the wrong time. The void was created, ISIS was formed.”

Trump went on to say that he does not know if he will get along with Putin, but added that “I hope I do.”

Another reporter then asked if Trump did anything in Moscow that he would regret, or that would leave him open to blackmail. He stated that as a high-profile individual he is very aware of his actions and careful not to do anything that would end up on television. He also smirked and stated that he is “very much of a germaphobe, believe me.”

A combative reporter then demanded to know why he is not releasing his tax returns, which Trump brushed off as saying nobody cares about them — also noting that he remains under audit. When challenged again, he reminded the reporter that he won — to applause from the crowd.

Trump also repeatedly refused to take a question from Jim Acosta of CNN, saying that his outlet is "fake news."

When asked what Trump would say to Putin right now, the president-elect said, "he shouldn't be doing it, he won't be doing it," speaking of the alleged hacking. "Russia will have much greater respect for our country when I am leading it than when other people have lead it. You will see that."

Trump: US, Russia Could Fight Daesh Together

Trump: I Hope to Get Along With Putin