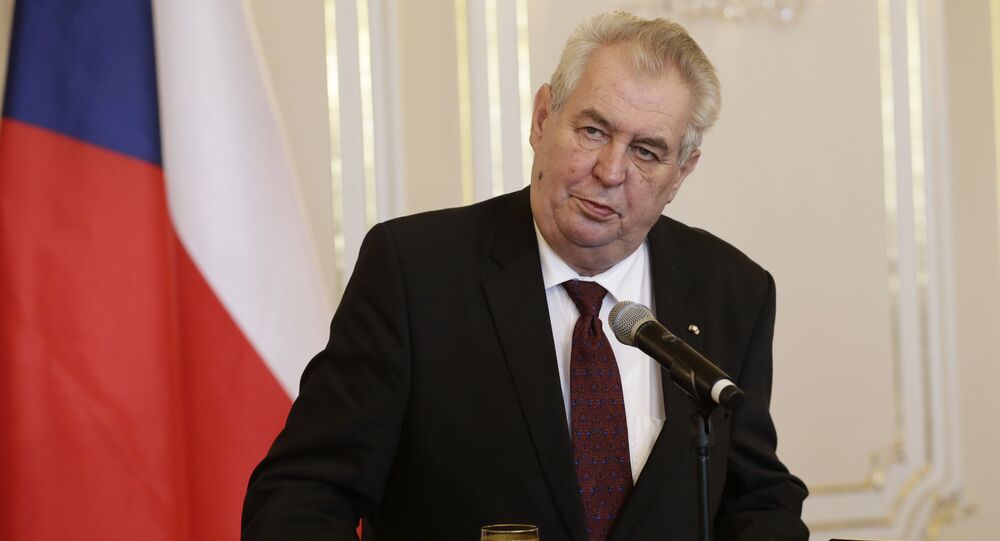 The American people knew what they were doing when they voted for Donald Trump, and the leak of damaging emails about Hillary Clinton helped the electorate to make up their minds about the two candidates, Czech Republic President Milos Zeman told local media.

© AP Photo / Sergei Chuzavkov
Arms Sales Surge in Czech Republic After President Warns of Islamic Terrorism
Claims by the CIA and the US political establishment that "Russian hackers" were responsible for Donald Trump's surprise presidential election victory are incredible, President of the Czech Republic Milos Zeman told Blesk.cz on Sunday.

"The voting machines they use in the US weren't broken. Perhaps there were hacks which led to the leak of Hillary Clinton's emails, but after all, the contents were true, weren't they?" Zeman pointed out.

"That's the main question. Americans aren't stupid, they chose between the candidates with their own minds and they didn't need anyone's foreign influence," he said.

The Czech President has already received an invitation from the US President-elect to visit the White House. "Neither Barack Obama nor Hillary Clinton would have invited me to the White House," he added.

Zemun noted that his predecessor, Vaclav Klaus, never received an invitation to the White House after spending  decade in office, eventually leaving in 2013.

"President Vaclav Klaus, who is an experienced politician, sought for ten years to be able to visit the White House. He didn't succeed."

"Thanks to the fact that the president is a man with views similar to myself, I have received an invitation," Zemun said, appraising the meeting as a "significant international event and, at least, a friendly step."

The President said that Trump knows the Czech Republic well, having visited the country with his ex-wife, Ivana. Czech-born Ivana moved to the US in the 1970s, where she met Donald Trump and married him in 1977.

Shortly after Trump's election it was reported that Ivana may become the US ambassador to her home country, a suggestion that was welcomed by a Czech presidential spokesman.

"He said he knows the Czech Republic well, and that it's a beautiful country … he read my letter of congratulations," Zemun added.

© AFP 2021 / Don EMMERT
4Chan Users Claim to be Source of Trump 'Golden Shower in Moscow' Hoax
Prior to the US presidential election on November 9, the campaign of Trump's rival Hillary Clinton was hit by a series of damaging leaks, including emails from the Democratic National Convention (DNC), and of Clinton's campaign chairman John Podesta.

The emails were obtained by US political insiders and handed to WikiLeaks, which published their revealing contents in instalments. Among the most damaging revelations is that the DNC colluded with the Clinton campaign and rigged the election process against rival Bernie Sanders.

WikiLeaks also revealed that journalists from the mainstream US media continued to collude with the Clinton campaign after its candidate won the Democratic nomination. In more than one case, interim DNC chair Donna Brazile was found to have forwarded CNN's debate questions to Clinton ahead of time, disadvantaging rivals Bernie Sanders and Donald Trump during their respective debates.