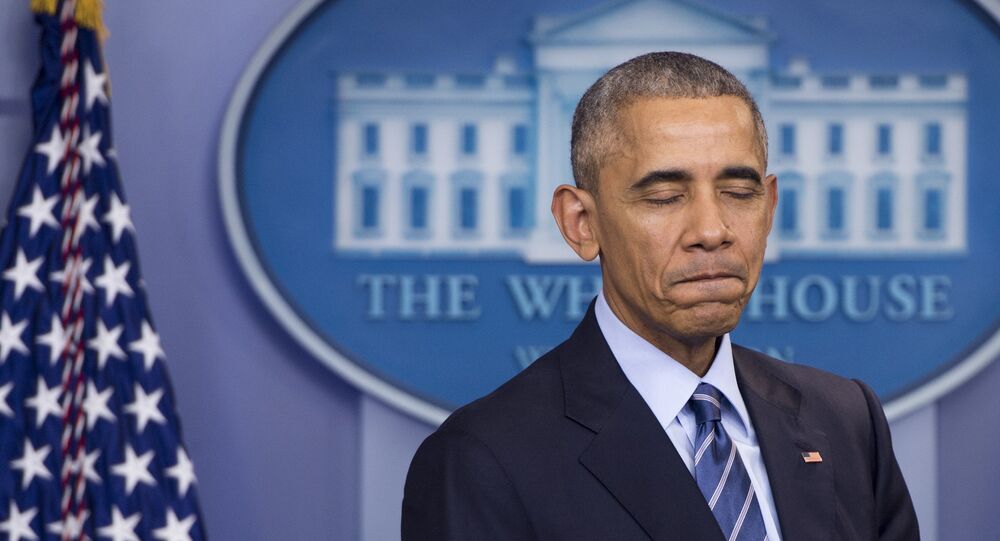 Outgoing US President Barack Obama's recent foreign policy moves reflect the collapse of his party and failure of its presidential candidate, Daniel McAdams, political analyst and executive director of the Ron Paul Institute for Peace and Prosperity, told Sputnik.

© AP Photo / Matt Rourke
Why Obama's Farewell Sanctions are Actually a 'New Year's Gift' to Trump
In an interview with Sputnik, Daniel McAdams, political analyst and executive director of the US-based Ron Paul Institute for Peace and Prosperity, drew attention to outgoing US President Barack Obama's recent foreign policy steps, which he linked to the implosion of the Democratic Party following Hillary Clinton's failed election campaign.

The interview came after Washington issued a series of controversial decisions that run counter to US President-elect Donald Trump's proclaimed policies.

For example, for the first time in 36 years, the US let the UN Security Council pass a resolution which condemns Israeli settlements in Palestine.

Trump, who had argued strongly for a US veto, called the resolution extremely unfair, adding that things will be different after his inauguration on January the 20th.

In another example, the Obama administration slapped Russia with new sanctions, accusing Moscow of hacking that allegedly helped Trump win the election, something that Daniel McAdams said was "an absolutely false story."

Earlier, the US President-elect expressed doubt regarding US intelligence claims of a Russian trace in the Democratic National Committee email leak.

Julian Assange: Obama admin is “trying to delegitimize the Trump administration as it goes into the White House” #Hannity

Asked about whether the outgoing US administration seeks to taint Trump's presidency, Daniel McAdams said that "it's relatively unusual" to see Obama taking "such bold foreign policy steps" as his administration is literally walking out the White House door.

"The Democratic Party has really imploded with [expectations of] Hillary Clinton's presidency and with the realization of the fact that they used the wrong [campaign] tactics to achieve better results. So I think they are having difficult time reflecting on all this," McAdams said.

When asked whether Trump will deliver on his promise to reverse Obama's decisions when he enters office, McAdams remained cautiously optimistic.

“No president in my lifetime, maybe no president in modern history will have had as small an impact as #Obama ” ~ @newtgingrich #Hannity pic.twitter.com/jSfnkSUEm6

"I don't know whether he will do it because he says a lot of things. But I think it will be quite easy for him to negate President Obama's executive orders. In fact, many of the sanctions on Russia are the result of such orders," he said.

© AP Photo / Alexander Zemlianichenko
If Trump Tries to Lift Obama's Sanctions, He 'Will Be Branded as Putin's Agent'
In response, Russian Foreign Minister Sergei Lavrov proposed the tit-for-tat expulsion from Russia of 31 US Embassy personnel and four personnel of the US General Consulate in St. Petersburg.