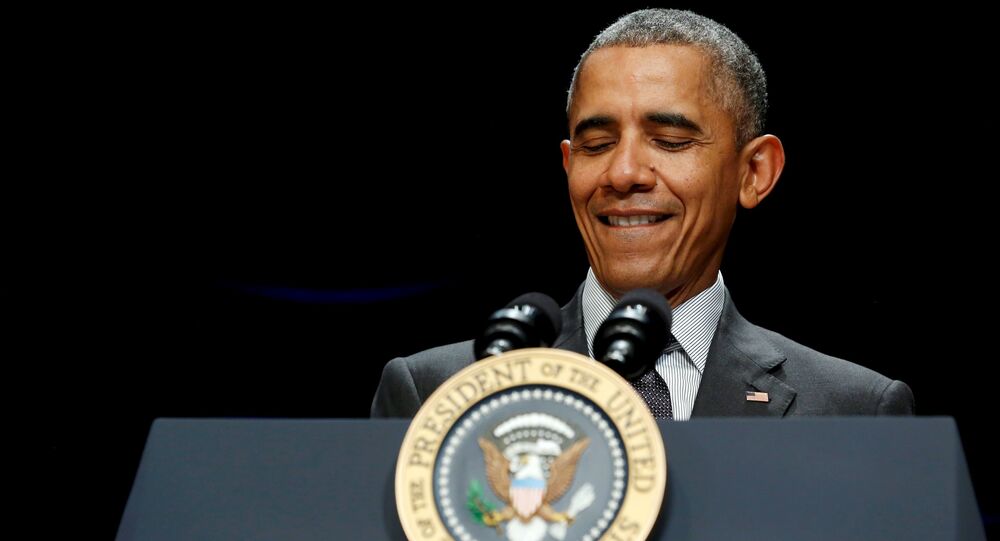 On December 29, the United States announced a series of measures against several Russian organizations and individuals in retaliation for Moscow’s alleged hacking into US political institutions. Washington also expelled 35 Russian diplomats and their families (about 100 people in all) and is closing down two Russian-owned compounds in the US.

Even though the expulsion of the country’s diplomats and closure of its diplomatic missions traditionally entails a tit-for-tat response, President Putin said on Friday that Russia will not expel US diplomats in response to Washington’s unfriendly move.

"We will not create problems for American diplomats. We will not expel anyone," Putin said. “Furthermore, I invite all children of US diplomats accredited in Russia to the Christmas and New Year tree in the Kremlin.”

He added that Russia’s further steps in restoring ties with the United States will depend on the policy of President-elect Donald Trump.

© AFP 2020 / KREMLIN POOL / PRESIDENTIAL PRESS SERVICE
Putin 'Outmaneuvers' Obama by Refusing to Expel US Diplomats, Slap Countersanctions
Earlier this month President Barack Obama warned that the US would “take action” against Russia for alleged cyberattacks on Democratic Party  officials who claimed that outside meddling prevented Democratic candidate Hillary Clinton from winning the presidency.

Top Democratic Party officials were quick to point a finger at imaginary “Russian hackers” without producing any shreds of evidence that such attacks really happened.

Immediately after the first batch of leaked documents went public, the Department of Homeland Security (DHS) released a statement claiming that the “disclosures of alleged hacked e-mails <…> are consistent with the methods and motivations of Russian-directed efforts.”

“Such activity is not new to Moscow — the Russians have used similar tactics and techniques across Europe and Eurasia, for example, to influence public opinion there. We believe, based on the scope and sensitivity of these efforts, that only Russia's senior-most officials could have authorized these activities,” the statement said.

It added, however, that even though “some states have also recently seen scanning and probing of their election-related systems, which in most cases originated from servers operated by a Russian company, [DHS] is not now in a position to attribute this activity to the Russian Government.”

Finally, just three weeks before he leaves office, President Obama had his revenge.

Simultaneously with his decision to slap Russia with new sanctions and expel its diplomats, the FBI released the results of its joint probe with the DHS, the CIA and other intelligence agencies that were expected to produce irrefutable proof of Russia’s wrongdoing and justify Obama’s new sanctions against Moscow.

According to the report two different Russian intelligence groups participated in the intrusion into an unnamed US political party.

The first actor group, known as Advanced Persistent Threat (APT) 29, entered into the party’s systems in Summer 2015, while the second, known as APT28, entered in Spring 2016.

In the summer of 2015 hackers allegedly working for Russia’s civilian intelligence service sent e-mails with hidden malware to more than 1,000 people working for the US government and political groups in a far-reaching operation to interfere with this year’s presidential election.

© REUTERS / Kevin Lamarque
Obama Tries to Undermine Trump by Imposing ‘Vindictive’ Anti-Russian Sanctions
One of these hacker groups calls itself Tsar Team and it looks like the Russian world “Tsar” (King) is seen as the only “proof” of Russia’s alleged involvement in these cyber-attacks one can possibly find in the 13-page report.

The “evidence” in the report, where Russian cyber activity is referred to as Grizzly Steppe, falls short of anything that would directly tie Russian intelligence services to any plan meant to influence the outcome of US elections.

In an interview with Sputnik, Vice President of the International Association of Russian-Speaking Lawyers Mikhail Ioffe said that even if the members of this group of hackers are Russian citizens it doesn’t mean a thing.

“This group may include people from different countries who have a shared agenda, or they may be Russians all, but this is not enough reason for introducing sanctions and expelling diplomats,” Ioffe said.

“This is all lies and fairytales. Tracing hackers in today’s world is a mission impossible. You can say they are from Africa, Australia or the Antarctic and no one will be able to either confirm or deny this. But each report or analytical memo is written for a reason. In this case the reason is to prove Russia’s alleged influence on the US presidential elections even though this whole thing simply holds no water,” Alexei Smolin, a professor at the Moscow Humanitarian University told Sputnik.

In a scathing comment, Zakharova wrote that the outgoing president did not manage to leave any major foreign policy achievements as part of his legacy and instead of “putting an elegant period” to his two presidential terms has “made a huge blot” with his decision to expel 35 Russian diplomats and close two diplomatic compounds in the US.

© AFP 2020 / JONATHAN ERNST
Trump Publicly Commends Putin for 'Great Move' on US Sanctions
Washington has also accused Moscow of harassing and intimidating US diplomats and organizations working in Moscow.

The list of Russian citizens targeted by the US sanctions includes the head of Russia’s Main Intelligence Directorate (GRU), three of his top assistants and two Russian nationals wanted in the US for using cyber-enabled means to allegedly cause misappropriation of funds and personal identifying information.

The US has also introduced sanctions against four other Russian organizations, including the GRU, the Federal Security Service (FSB) and three companies charged for allegedly assisting in cyber-attacks against US political parties and organizations.