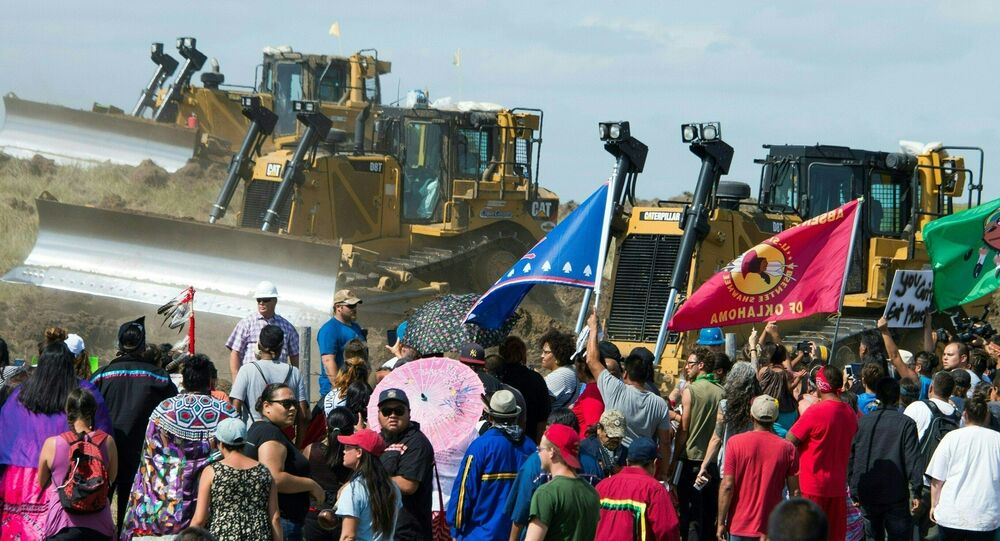 Clashes broke out in the US state of North Dakota in 2016 between law enforcement officers and protesters opposing the construction of a 1,200-mile oil pipeline which they claim will contaminate water resources and violate sacred tribal territory.

WASHINGTON (Sputnik) — The $3.7 billion Dakota Access Pipeline would transport up to 570,000 barrels per day of domestically-produced light crude oil from North Dakota through South Dakota and Iowa into Illinois, according to Texas-based Energy Transfer Partners (ETP). ETP claims they have met all government legal and safety regulations to build the pipeline.

© REUTERS / Rob Wilson
Obama: Controversial Dakota Access Pipeline May Be Rerouted
The chairman of the US House of Representatives’ Natural Resources Committee, Rob Bishop, in November blamed President Barack Obama’s administration for encouraging protests that have caused a delay in building the Dakota Access Pipeline.

Bishop argued that the route for the oil pipeline has been approved through a permitting process that followed established federal regulations.

In early December, the US Army Corps of Engineers denied an easement that halted the construction of the final phase of the Dakota Access Pipeline, citing environmental concerns.

The delay was the latest in a series of overt and transparent political actions by the Obama administration, which abandoned the rule of law to curry favor with a narrow and extreme political constituency, the ETP stated.

Republican congressman Lamar Smith said in a release that the US Environmental Protection Agency (EPA) must change the way it operates after it reversed its initial finding that the fuel-drilling technique fracking doesn’t have a broad impact on drinking water.

"It’s no surprise that right before a shift in administration the EPA conveniently changes its mind on the impact of hydraulic fracturing on water supplies," Smith said.

Smith, chairman of the House of Representatives’ Science, Space and Technology Committee added, "I look forward to working with the next administration to enact critical reforms to put EPA back on course in pursuing transparency and sound science."

The Standing Rock Sioux Tribe led the opposition, claiming the controversial pipeline infringed on sacred land including burial sites and vital drinking water resources such as the Missouri River.

On December 4, the Army Corps elected not to issue a permit for drilling beneath Lake Oahe, a reservoir that serves as a major source for water for the Standing Rock Sioux, adding that alternative routes for the pipeline would be explored. The decision was taken after thousands of activists protested pipeline construction.

© Sputnik / Ramil Sitdikov
Environmental Impact: Three Years Later N. Dakota Massive Oil Spill Still Not Cleaned Up
Pipelines in North Dakota have leaked crude oil and other hazardous liquids at least 85 times since 1996, an average of four spills a year, and caused more than $40 million, according to the federal government data cited by the Center for Biological Diversity.

The environmental advocacy group claimed that Energy Transfer Partners specifically has been responsible for 29 pipeline safety incidents since 2006, resulting in nearly 10,000 barrels of hazardous liquids spilled.

As a result of the report, the EPA asserted that it can "inform decisions" by policymakers in federal, state, local and Native American tribal governments, as well as communities "to protect drinking water resources now and in the future."

Nearly 4,500 "water protectors" were present at camps near the construction site and on weekends the number increased to 8,000. More than 300 tribes took part in the anti-pipeline protests.

© AP Photo / John L. Mone
North Dakota Pipeline Protesters 'Not Inclined' to Heed Orders to Decamp
On November 20, approximately 300 protesters were injured as they were attacked by law-enforcement while protesting the building of the pipeline. Twenty-six suffered serious injuries and were taken to a hospital in the region, the release stated. One protester sustained severe injuries to her left arm from a concussion-grenade blast.

The Morton County Sheriff’s Department reported in December that since August 10, law enforcement arrested 571 individuals, which only 6.8 percent of them were from North Dakota. The highest percentage of arrests were from California at just over 15 percent, followed by South Dakota at 11.21 percent and Washington at 7.78 percent, the department noted in a release.

Of the total arrested, 41 percent were Native Americans, the release added.

Law enforcement received widespread backlash for its use of excessive force against protesters. US Democratic Senator Cory Booker called on the Justice Department to send federal monitors to the Standing Rock Sioux reservation for the violence being reported amid protests

The American Civil Liberties Union (ACLU) called on the Justice Department to probe into the militarized response to peaceful demonstrations and UN officials also expressed concerns.

"The excessive use of State security apparatus to suppress protest against corporate activities that are alleged to violate human rights is wrong and contrary to the UN Guiding Principles on Business and Human Rights," UN Special Rapporteur on the rights to freedom of peaceful assembly and of association, Maina Kiai, said in a press release on November 15.

The ACLU said US federal authorities should prohibit the use of weapons, including armored vehicles, beanbag bullets, and pepper spray, by law enforcement officers during riots.

After the Army Corps halted the construction of the final phase of the Dakota Access Pipeline, Sioux tribe chairman Dave Archambault advised protesters opposing construction to return home now that the battle over the controversial project has shifted to the courts.

However, US President Barack Obama’s inaction regarding protests against the pipeline dismayed members of Native American tribes affected by the project, a tribal official told Sputnik.

One official with the Standing Rock Medic and Healer Council stated in late November that because of the Army Corps’ lack of a response, sacred sites had been destroyed and have been disturbed by Dakota Access.

The choices US President-elect Donald Trump made for his Cabinet threaten to return the United States to an era of dirty energy and big oil, Senator Edward Markey said in a statement.

Trump transition spokesman Jason Miller told reporters that the president-elect will wait until he is in office to review the Army Corps’ decision to deny Dakota Access Pipeline permission to finish construction.