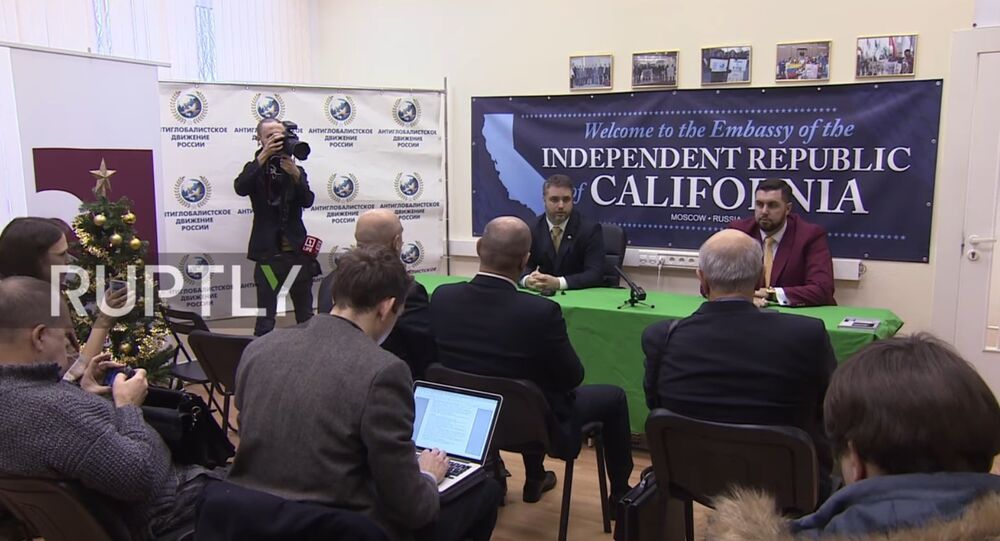 #CalExit: California Secessionists Claim to Have Opened ‘Embassy’ in Moscow

Last weekend a group of Californians seeking to secede from the US established an embassy in Moscow ahead of a statewide “Calexit” vote in 2018.

San Diego resident Louis Marinelli, who leads the Yes California Independance campaign, told the LA Times, "We want to start laying the groundwork for a dialogue about an independent California joining the United Nations now."

For the Golden State to become the Independent Republic of California, it would have to be approved by voters in 2018, after which it could go to special referendum in 2019 if it receives 500,000 signatures. Marinelli, who currently works as an English teacher in Moscow, says that he is not fazed by the obstacles his organization faces.

He said, "All major social and political movements in this country take time and inevitably have to overcome failures and setbacks before they are ultimately successful."

During a press conference on Sunday, Marinelli explained that the embassy would focus on promoting tourism, building trade relationships and educating Russians about California’s many cultures, instead of serving as a diplomatic institution.

"We're certainly going to request recognition of our independence and recognition of our [2019] independence referendum result, as we're going to request that the entire international community recognizes the results." he said, according to RT, adding, "We're opening up a conversation in Russia and it's [to] a much smaller degree to the Americans when they wanted their independence from the British empire. They went and pursued military assistance and so on and so forth. We're not doing anything like that."

The Calexit movement began in earnest in late November when Yes California first proposed the ballot measure for the 2018 vote. Members of the two-year-old organization are frustrated with paying more money to Washington than California receives in federal spending, and point out the many cultural differences that make the state’s continued presence in the US untenable.

"In our view, the United States of America represents so many things that conflict with Californian values, and our continued statehood means California will continue subsidizing the other states to our own detriment, and to the detriment of our children," according to their website, adding that this "charity" is given to the detriment of California’s infrastructure and schools.

"However, this independence referendum is about more than California subsidizing other states of this country. It is about the right to self-determination and the concept of voluntary association, both of which are supported by constitutional and international law."

Rex Tillerson: The 'Hand Of Moscow' in Washington?

No Russians Wounded in Terror Attack in Turkey's Kayseri - Moscow