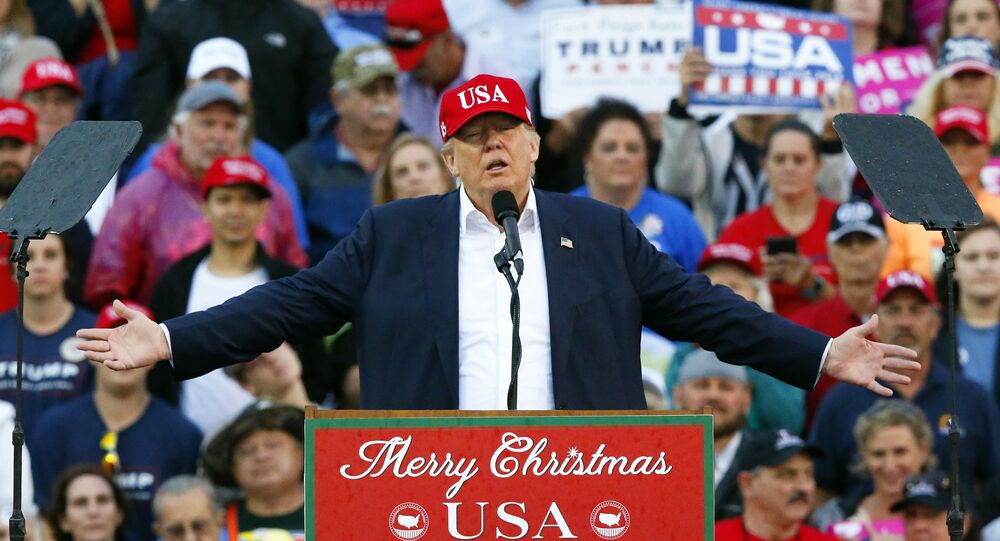 President-elect Donald Trump wrapped up his victory tour in Mobile, Alabama, December 17, reminiscing about the path to his election victory and looking ahead with a promise to focus on "three very beautiful words: jobs, jobs, jobs."

"We're going to go back to the old days," Trump said. "We are going to stand up for the American worker like no one has ever stood up for that worker before." He promised America's "forgotten" men and women that they would "never be forgotten again."

"Together, we will raise incomes and bring back our jobs," he said.

"At the center of our agenda is fixing our absolutely terrible trade deals," the president-elect said. He again bemoaned the loss of manufacturing jobs in the US and repeated his promises to penalize companies that move jobs out of the US. He also promised to lower taxes on businesses and lift regulations on energy production and "put our miners back to work."

"Made in the USA, remember?" he asked.

Trump referenced his promises to stop illegal immigration, saying again that he'd build a great wall, which prompted chants from the crowd. He did add, though, that there would have to be "doors" in the way to let in legal immigrants "by the tens of thousands."

There will be no door for immigrants from regions where people can't be investigated — a nod to limiting immigration from some Muslim countries. "I am going to keep radical Islamic terrorists the hell out of our country," he said.
He also repeated campaign promises to repeal the Affordable Care Act, defend gun ownership and protecting religious liberty — as he and surrogates repeatedly and pointedly wished the crowd a merry Christmas.

Trump also went after his usual punching bags — the media, which he called "very dishonest people," accusing them of misquoting him and twisting his message. Instead, he said, rallies like this are a better way to get his message out. The president-elect has often chosen to eschew traditional press conferences in favor of Twitter or public events like this.

A lineup of surrogates also addressed the crowd, including campaign manager Kellyanne Conway, who commented that, had the campaign wanted to focus on winning the popular vote, they would have campaigned harder in California and other populous states.

"Had any of those graphics on TV said ‘Road to the Popular Vote,' we would have been in California and Illinois and New York, and we would have won the popular vote," she said. "But every graph said ‘Road to 270,' so we figured we'll get 306 just to have a little cushion."

Trump gave his own account of the night of the election, saying that he offered to buy Democratic contender Hillary Clinton's fireworks display off her team, because "I found fireworks just don't work when you lose." He also congratulated himself, saying he didn't think anyone else had ever worked harder during the last month of the campaign, and spent several minutes bragging about not spending as much as his competitors on the campaign trail.

At a mention of "the Hillary people," the crowd erupted in chants of "lock her up," to which he responded, "Eh, we won."

In an hour-long speech that clearly divided perceived election winners and losers, the president-elect threw in a sop to unity near the close.

"When Americans are unified, there is nothing we cannot do," he said. "There's nothing and nobody like us. My message today is for all Americans."