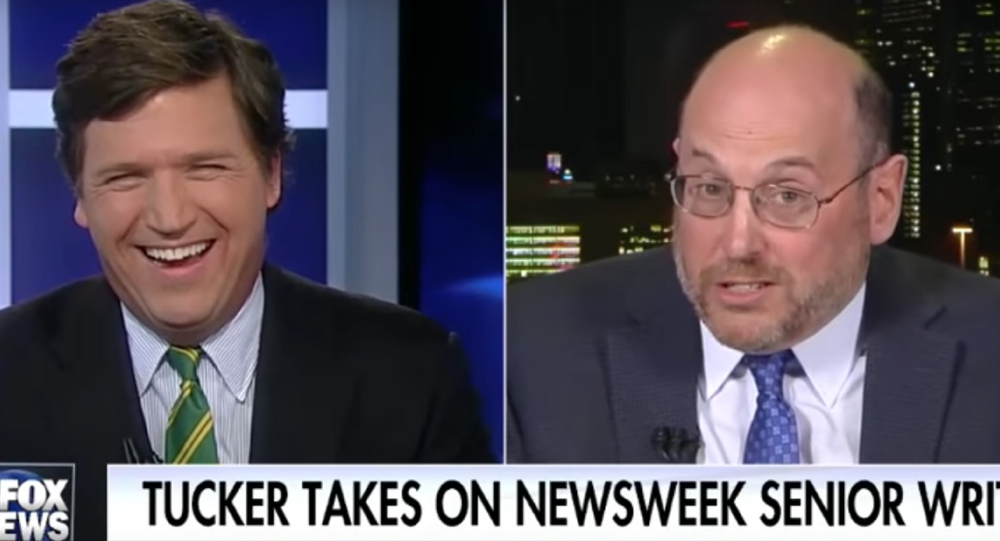 Notorious self-promoter Kurt Eichenwald was called out in a big way on Thursday evening’s episode of Tucker Carlson Tonight, and it has apparently triggered a long-anticipated, full-scale meltdown by the Newsweek senior reporter.

Appearing on Carlson’s new Fox News show, Eichenwald was called out for practicing “advocacy” instead of journalism.

"I’ve been reading your stuff for 20 years probably, but in the last year, I’ve noticed a partisan turn from you,” Carlson said. “So, I looked up your bio and it describes you as a senior writer at Newsweek — which suggests journalism. Do you believe that you are practicing journalism?"

© Flickr / Mathieu Thouvenin
Newsweek Journalist Claims US Intelligence Fed Him False Putin-Trump Conspiracy
Eichenwald laughed, attempting to deflect the question, but Carlson pulled out a list of some of the writer’s more deranged tweets, including using the word “dumbass” to describe Trump supporters, and his assertions that Republicans hate America.

As Carlson read Eichenwald’s tweets, the writer noticeably shifted uncomfortably in his seat, insisting that his tweets were being taken out of context.

Carlson then read a tweet in which the Newsweek reporter claimed, without presenting evidence, that Donald Trump had been institutionalized in 1990, for a mental breakdown and amphetamine abuse.

"I knew from people inside the Trump organization that they were deeply concerned about his condition — that he was getting reckless, that he was getting impulsive. That he wasn't sleeping. That he was speaking with these sort of great variations of grandeur that he could do anything. And in 1990, because he did so many deals that were so reckless, his whole empire was going into bankruptcy. And he was going through a divorce. And I was told that there was — now, let me say, I'm talking about reporting process. So I'm saying here is what I was told," Eichenwald said.

Attempting to stop the tangent and get a straight answer from his guest, Carlson interjected, asking, "was he in a mental hospital or not in 1990? He alleged that he was. Was he or wasn't he?"

During the segment, Eichenwald, displaying show business tactics worthy of the greats, suddenly pulled out a binder labeled, “Tucker Carlson Falsehoods,” presenting it to deflect the host’s pointed inquiries.

Eichenwald danced around the issue of Trump’s alleged mental hospitalization, wasting time by declaring over and over that his host was not allowing him to answer what was a simple yes or no question.

"I'll give you 30-seconds to answer this question: do you have evidence that he was institutionalized in a mental hospital in 1990?" Carlson asked, again.

Eichenwald, instead of answering the question, then went on another anxiety-ridden tirade, this time about fallen CIA agents.

"I am concerned about your behavior on this show tonight," Carlson said at the close of the segment.

After the episode aired, Eichenwald went on another of his predictably unhinged tweetstorms, which has since been deleted.

“I have a large book of @TuckerCarlson falsehoods that he has uttered on air and printed in newspapers. I believe folks need to know this. I will [be] posting one new falsehood from my ‘Tucker Carlson Falsehoods notebook every day until I run out,” Eichenwald said in a now-deleted tweet.

The writer also claimed to have a “message from the intelligence community,” that he asserted he was intending to deliver on-air before he was “cut off.”

But just when everyone thought things in Eichenwald’s curious worldview could not get any more bananas, they did.

A tweet sent from Eichenwald’s account, claiming to be from his wife, claimed that she had called the police to report a Twitter user for assault, after a gif they sent triggered a seizure in the publicity-hungry newshound.

“This is his wife, you caused a seizure. I have your information and have called the police to report the assault,” according to the tweet from Eichenwald’s account.

Newsweek’s editor in chief, Jim Impoco, has since claimed that he spoke to Eichenwald, and that he is “weak but ok.”