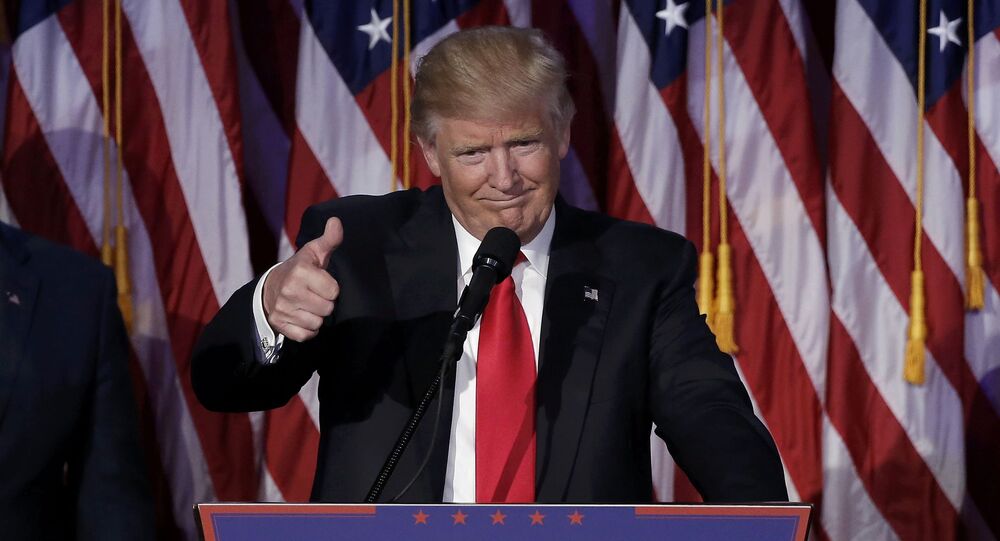 © Sputnik / Vladimir Astapkovich
AmCham Confirms Discussing Anti-Russia Sanctions With Ex-Trump Campaign Aide
WASHINGTON (Sputnik) – At least 2,500 people are expected to protest Donald Trump’s presidency at a rally in Washington, DC on Saturday, two days before the Electoral College votes in the last act of the 2016 US election, marketing company executive John McGrane, who is organizing the event, told Sputnik.

"We think a Trump presidency presents a very real and immediate threat to the things we hold sacred," McGrane said Friday. "The march will be held two days prior to the states casting their electoral votes on December 19, and we want to ‘turn out’ two days early and let our unified voice be heard."

Under the social media hashtag #TurnOut, the protest is being sponsored by NOQ Creative, a San Francisco, California marketing company McGrane founded with his sister, Kelly, in 2015. NOQ, according to the company website, "partners with companies and individuals…around the globe" to help accomplish marketing objectives.

The goal of Saturday’s demonstration is to defend and protect liberties that some Americans fear will be threatened under Trump's presidency, such as the rights of women and minorities, environmental protection and affordable health care, McGrane explained. The fact Republicans control both chambers of the US Congress exacerbate these concerns, he added.

The event is to take place at an amphitheater near the Washington Monument and feature Christopher Suprun, a Republican elector from Texas who has said he will defy the popular-vote result in his state and oppose Trump when the Electoral College convenes Monday.

The Electoral College, whose 538 votes equal the number of legislators in Congress, consists of state-level electors like Suprun who formally choose the president and vice president based on popular-vote results.

Trump surpassed the threshold of 270 electoral votes needed to become president, reaching 306 to Democrat Hillary Clinton’s 232. Clinton, however, won the November 8 nationwide popular vote by a margin of more than 2.8 million over Trump.