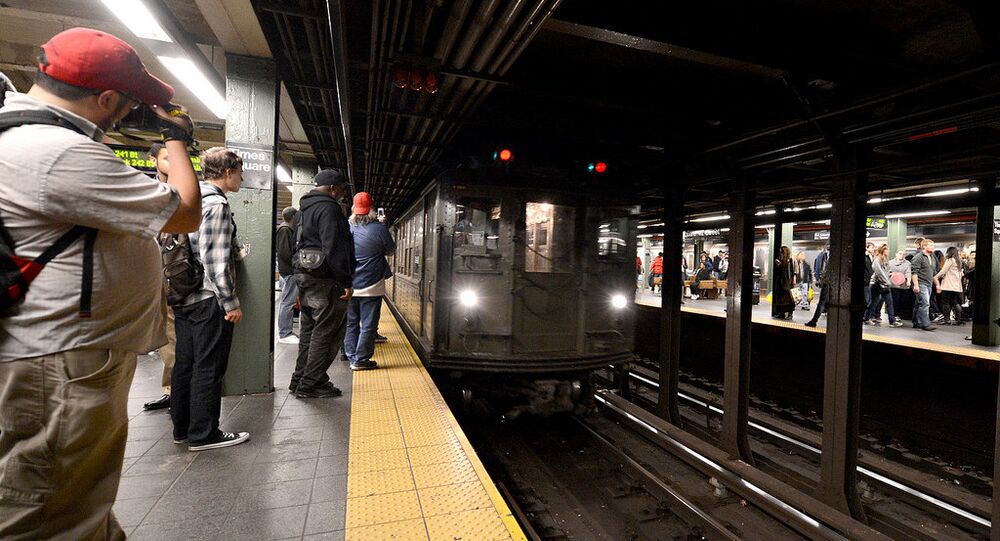 Muslim Student Made Up Story About Subway Attack By Trump Supporters

A New York-based Muslim college student, claiming to be a victim of a hate crime by Donald Trump supporters, has been arrested for inventing the story.

Screenshot/CBS Los Angeles
Viral Video of Armed 'Cop Stalker' Rattles Police, Turns Out to Be a Hoax
Yasmin Seweid, 18, is one of several who have reported false hate crimes following the US presidential election.

Seweid claimed that on December 1 she was attacked on the subway by three white men shouting support for Trump while attempting to snatch her head scarf. On Wednesday, she confessed to police that she had made the story up to avoid getting in trouble for breaking curfew and going out drinking with friends.

“Nothing happened, and there was no victim,” a police source told the New York Post.

Appearing in court on Thursday morning for her arraignment, Seweid not wearing a hijab, revealed that she is bald. The woman’s “strict Muslim parents,” who are Egyptian immigrants, forced her to shave her head over the incident, and were upset that she had been dating a Christian.

Seweid is charged with filing a false report and faces up to one year in prison if convicted.

The Baruch College student posted her fictional hate crime to Facebook, where it was rapidly spread by Trump detractors as “proof” that his presidency is inciting violence.

“I was harassed on the subway last night,” she had wrote. “And it was just so dehumanizing I can’t speak about it without getting emotional.”

Seweid’s older brother was charged with filing a false report in 2012, claiming that he too was “assaulted by three unknown males.” Her brother, 17 at the time, was charged with grand larceny and conspiracy, for breaking into parked cars and stealing the contents.

© Photo : Pixabay
Amazon Online Retail Giant Pulls Sexy Burka Halloween Costume Amid Public Outrage
After the November election an 18-year-old Muslim student from the University of Louisiana at Lafayette told a fake story that went viral, claiming that she was accosted by two white men. She asserted that one of the men was wearing a Trump hat, and that they shouted racial slurs at her, knocked her down, stole her wallet, and ripped her headscarf off. Her post about the incident was shared by seemingly every liberal social media voice and media outlet.

She later admitted to the Lafayette Police Department that she had lied, and is now facing misdemeanor charges and disciplinary action from her university.

“During the course of the investigation, the female complainant admitted that she fabricated the story about her physical attack as well as the removal of her hijab and wallet by two white males,” Lafayette police said in a statement. “This incident is no longer under investigation by the Lafayette Police Department.”

Another female student from Bowling Green State University in Ohio went viral after she claimed that she was attacked by three white men wearing Trump hats who threw rocks at her and called her a racial slur.

In her post she described in detail what each man was wearing during the alleged hate crime, but never filed a police report. Eventually, an officer from her school took her to the police station to file a report.

Throughout the police investigation, law enforcement noticed that 24-year-old Eleesha Long’s story changed multiple times, and that her Facebook and Verizon history proved that she was not where she claimed to be. It turns out that the student made the story up out of frustration with friends and family members who supported the President-elect.

In her text messages, police found messages to her boyfriend and mother saying things such as, “this is why you should take an IQ test to vote,” “I hope they all get AIDS,” and “I haven’t met a decent Trump supporter yet.”

She has now been charged with falsification and obstructing official business.

The students involved were not publicly named, but gained viral attention after pouring a red wood stain, meant to look like blood, down the stairwell of a school building and writing “AMKKK KILL” with the substance.

The FBI as well as the Massachusetts State Police were brought in to investigate the vandalism as a potential hate crime, but ultimately it was determined that two students had done it as an act of protest against the election results.

“Their actions did much more than damage property,” Williams College president Adam Falk said in a statement after the students confessed. “They harmed our entire community and caused considerable fear, among students in particular. We are deeply distressed that anyone in our community would feel compelled to express themselves in such a destructive and harmful way.”