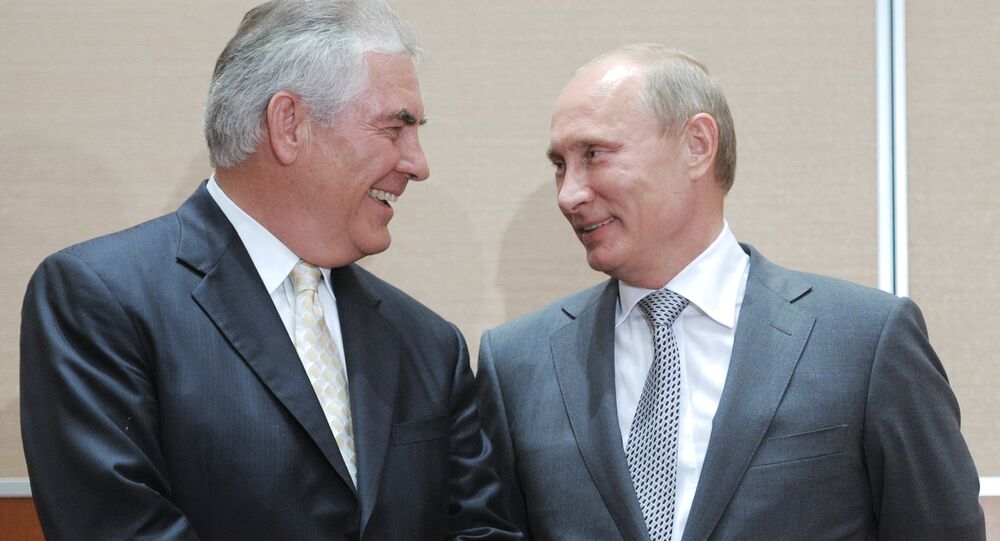 ExxonMobil, headquartered in Texas, is the biggest private oil company around and one of the world’s leading corporations in terms of capital.

© Sputnik / Dmitry Astakhov
Nominated State Secretary Tillerson Unlikely to Have Anti-Russia Bias - Medvedev
In Russia ExxonMobil is engaged in the implementation of Sakhalin-1 project, together with Japan’s Sodeco, Russia’s Rosneft and India’s ONGC, developing a number of offshore oil and gas fields located in extreme sub-Arctic conditions off the northeastern coast of Sakhalin Island in the Russian Far East.

Rex Tillerson joined ExxonMobil in 1975. In January 1998 he was promoted to Vice President of Exxon Ventures (CIS) Inc. and President of Exxon Neftegas Limited to manage Exxon projects in Russia, the Caspian region and on Sakhalin-1. The 64-year-old Texas-native has been Exxon’s CEO since 2006.

Tillerson first met Vladimir Putin in person in 1999 on Sakhalin Island. In 2003 the two rubbed shoulders during President Putin’s meeting in St. Petersburg with the top executives of Russian and foreign energy companies and winners of the Global Energy award.

They met again in 2005 during Vladimir Putin’s working visit to Washington.

In June 2012, Tillerson had a meeting with Putin in Tuapse after inking a deal with Rosneft CEO Igor Sechin on the joint development of hard-to-reach oil in Western Siberia.

The Exxon CEO has taken part in several international economic forums in St. Petersburg, including the one held earlier this year.

During the June 2013 International Economic Forum in St. Petersburg President Vladimir Putin bestowed Tillerson with the Order of Friendship, an honor that goes to foreign nationals who help strengthen international relationships with Russia.

Rex Tillerson’s participation in the 2016 international economic forum in St. Petersburg amid official US calls to maintain sanctions against Russia was described by Reuters as a highlight of the meeting.

According to US estimates, Exxon has arguably  been the hardest hit by the US sanctions against Russia. It had to suspend work on nine joint projects with Rosneft.

© Sputnik / Alexei Druzhinin
Tillerson Vital to Trump’s Goal of Restoring US-Russian Relations
In an interview with Bloomberg, Tillerson said that Exxon just couldn’t wait to resume its work in Russia.

Meeting with Russia’s Fuel and Energy Minister Alexander Novak on the sidelines of this year’s economic forum in St. Petersburg, Tillerson discussed with him the possible monetization of Sakhalin-1 gas.

“It's not like he's pounding down vodka with Vladimir Putin at the local bar,” Conway said, adding that Tillerson’s deal-making with oil-producing countries would be an asset to the US.

True to his reputation of a tough dealer, Rex Tillerson and ExxonMobil filed a lawsuit with an arbitration court in Stockholm in April 2015 claiming that its subsidiary Exxon Neftegas Limited overpaid an estimated $500 million in profit taxes on its Sakhalin-1 oil and gas project.