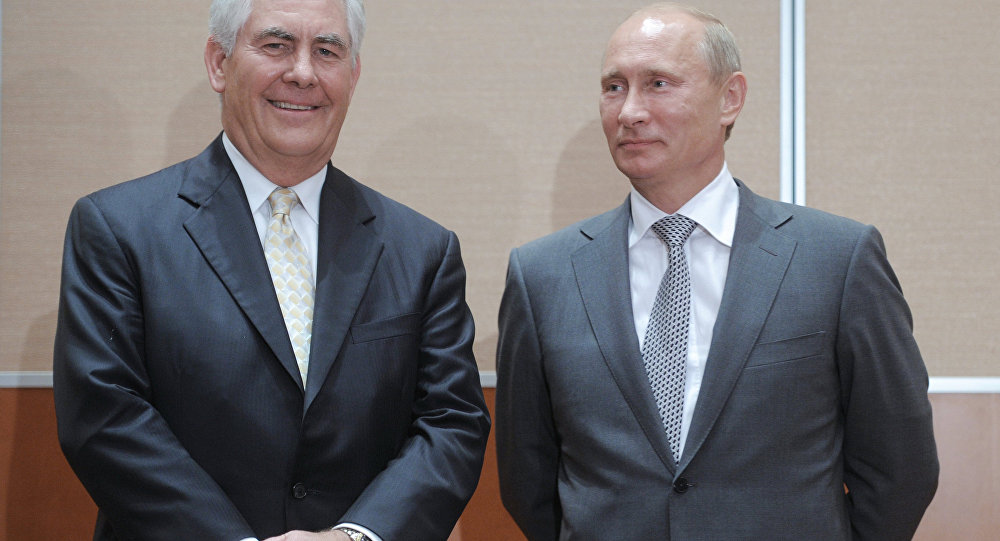 On Tuesday, US President-elect Donald Trump announced his plan to nominate Tillerson to be the United States’ 69th secretary of state. The nomination is subject to approval by the Senate.

"As the CEO of Exxon, Tillerson understands and appreciates the complicated regime of sanctions as to countries like Iran and Russia," Ward said on Tuesday. "He’ll bring that practical knowledge to the discussion table as the Trump Administration sets out its foreign policy."

© REUTERS / Carlo Allegri/File Photo
Tillerson Aims to Reverse Years of US Foreign Policy Disasters - Trump
In his role as top diplomat, Ward explained, Tillerson will be responsible for shaping policies related to US economic sanctions and trade embargoes.

Exxon Mobil has been involved in various projects in Russia, including the exploration, development and the operation of the Sakhalin-1 project since the early 1990s.

In June 2013, Russian President Vladimir Putin awarded Tillerson the Russian Order of Friendship for significant contribution to strengthening cooperation in the energy sector.

US Democratic lawmakers and other critics have raised concerns about Tillerson’s business ties to Russia and his expected advocacy for environmentally damaging fossil fuels at the expense of cleaner energy alternatives.

Ward was appointed by the State Department to serve on the US Defense Trade Advisory Group (DTAG), which advises the government on global security-related trade matters.