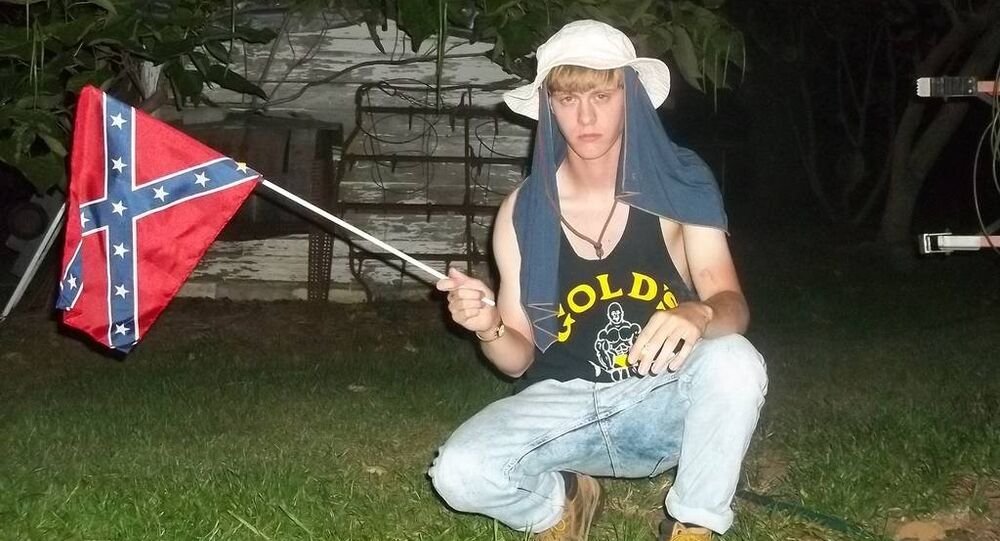 Jurors in the death-penalty trial of Charleston church-shooter Dylann Roof watched a portion of his interrogation video on Friday, featuring the admitted white supremacist laughing as he confessed.

© REUTERS / Charleston Police Department
Friend of Charleston Gunman Dylann Roof Pleads Not Guilty
It was the first time the disturbing video had been played publicly.

In the video, Roof waives his rights and engages in small talk with police investigators in Shelby, North Carolina, for a minute or so, before being asked what he had done.

"I went to that church in Charleston and I did it," he said, before laughing.

The shooter, who fired 70 rounds inside the Emanuel African Methodist Episcopal Church, killing nine people, sat calmly as an officer asked him, “Did you shoot them?”

The investigators asked him how many people he thought he had killed, to which he responded that he was not sure, but guessed five.

"If I was going to guess, five maybe. I'm really not sure,” Roof stated.

The killer then asserted that he had not said anything to his victims, stating “I didn’t talk to them.”

Roof admitted that he “drank a little” before entering the church and sitting with his victims for approximately 15 minutes of their bible study group. He remembered that he had been handed a sheet of religious verses before beginning his massacre.

Felicia Sanders, who survived the shooting and testified on Wednesday, confirmed that Roof was given a copy of the page they were studying before he began his rampage. She stated that he had kept his head down in the group, “just as he is doing right now.” Her 26-year-old son Tywanza, and her 87-year-old aunt Susie Jackson, were killed in the attack. She described her granddaughter telling her how scared she was as the shots were ringing out, and how she had told the child to “play dead.”

© REUTERS / Facebook profile picture
Charleston Church Shooter Dylann Roof to Plead Guilty if Spared Execution
In perhaps one of the most pathetic portions of the sad confession video, Roof admits that he considered not following through with his deadly rampage.

"I was sitting there thinking if I should do it or not," Roof said. "I could have walked out. I don't want to say it was spur of the moment."

The discussion eventually turned to race, and the monotonal and emotionless murderer said “Somebody had to do it.”

Roof stated that he likes Charleston, “it's historic, too, you know. I think at one time it had the highest ratio of blacks to white during slavery, and AME is a historic church. I researched black churches,” he said.

The killer detailed that his victims dove under tables, but did not try to escape. Roof confessed that he was shocked that police were not waiting outside when he left the church, and that he had been prepared to kill himself with his own weapon, if law enforcement had confronted him outside.

When asked about his motivation, the 22-year-old claimed that he was influenced by the internet.

"It sounds lame but it was pretty much the internet," he said. He also claimed that the shooting was “political” and admitted that he considers himself a white supremacist.

Roof stated that his plan was to “agitate race relations," and that he supports Hitler. He spoke of his racism growing during the Trayvon Martin killing case, and suggested that Muslims are “overrunning” portions of Europe.

"Our people are superior," he said, referring to his own genetic makeup.

When asked if what he did made him “glad,” Roof responded again that he “had to do it.”

After being informed that his estimate on how many he had killed was too low, and that it was eight at the scene, with a ninth person dying at the hospital, he said “well, it makes me feel bad.” The comment was in contrast to his laughter a few minutes prior.

© AP Photo / David Goldman
Former US Attorney General Says Charleston Church Shooting ‘Act of Terror’
The shooter asserted that he would not be able to look into the eyes of the relatives of the people he shot.

On Wednesday, the shooter’s mother suffered a heart attack in the courtroom during a lunch recess.

Defense attorneys have suggested that the jury “consider his youth,” noting that he told the FBI that he did not have any friends.

Prosecution opening statements claimed that Roof was "cold and calculating" and had shown that he had a "cold and hateful heart" by sitting with the group before killing them.