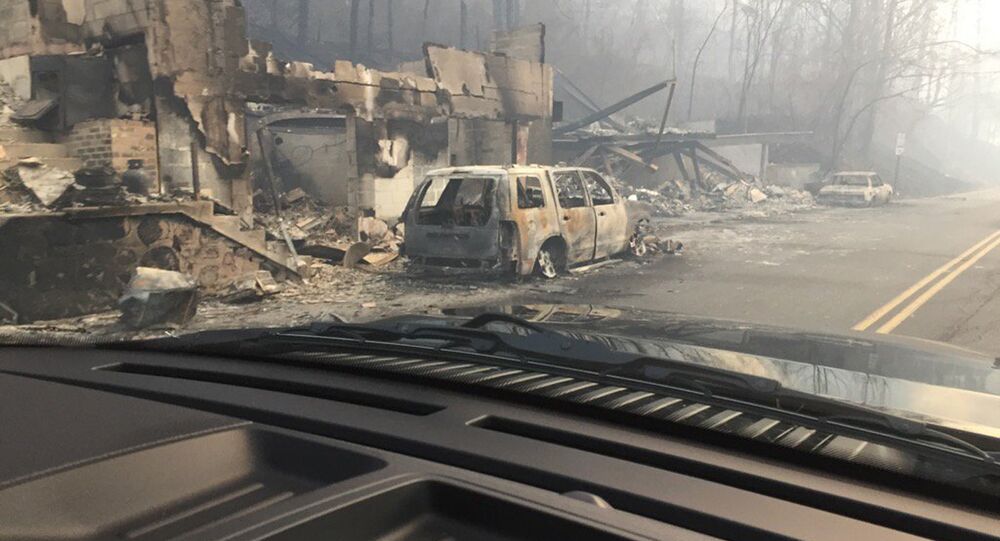 Death Toll in US State of Tennessee Wildfire Rises to 14

The death toll from wildfires in the US state of Tennessee has risen to 14 while at least 134 people are injured, local media reported on Monday.

© AP Photo / Mark Humphrey
Over 50 People Injured in Wildfire in US State of Tennessee
MOSCOW (Sputnik) – Both local residents and visitors to the resort town of Gatlinburg are among the dead, local officials confirmed, as reported by Fox8.

More than 1,600 buildings were destroyed while over a thousand people, 46 fire engines and six helicopters are involved in land and air assistance in the area.

Officials work to assess the infrastructural damage. Emergency crews are trying to restore utilities and reopen roads, but a city checkpoint and curfew, limited area access, and a boil water advisory are still in force.

Over the last few weeks fires have raged in the states of Tennessee, Georgia and North Carolina. Last week, Tennessee Governor Bill Haslam announced a state of emergency in connection with the large-scale fire. Haslam said that that the present wildfire, which erupted due to drought in southern states, was the biggest fire to occur on the state’s territory over the past 100 years.

Last Monday, the fires spread from the Great Smoky Mountains into inhabited areas. On the same day, over 14,000 residents and visitors were evacuated from Gatlinburg.

Over 50 People Injured in Wildfire in US State of Tennessee

At Least 1,500 People Evacuated Due to Wildfire on France’s Oleron Island