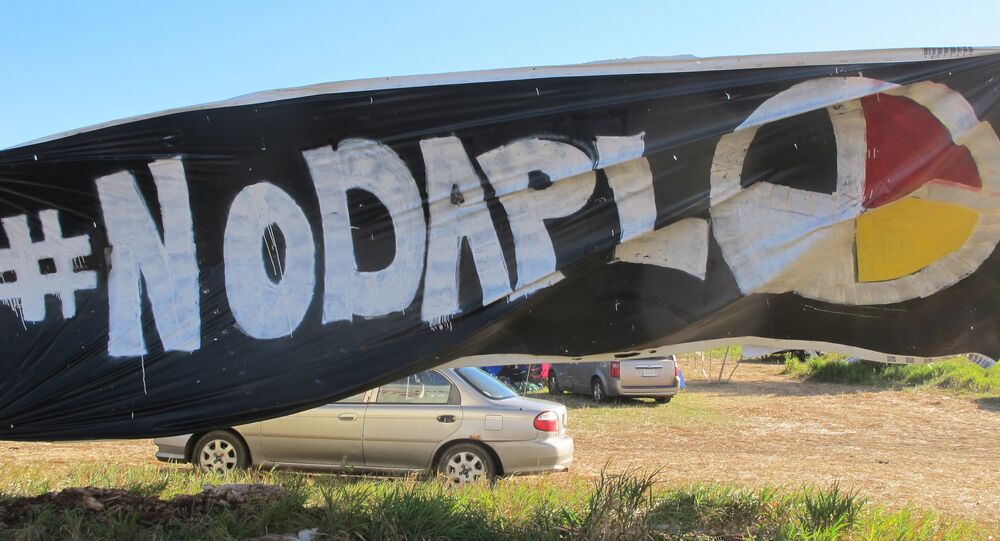 Hundreds of US military veterans are arriving at a snowy camp in North Dakota to stand with the thousands of activists and Standing Rock Sioux Tribe to protest the Dakota Access Pipeline.

© REUTERS / Amdrew Cullen
#NoDAPL Water Protectors to Police: We Are Not Leaving Despite Eviction Threat
Calling themselves “Veterans Stand for Standing Rock,” some 2,100 veterans have signed up to form a human wall in front of the police to protect the protesters. Among the group is veteran and Congresswoman Tulsi Gabbard, currently a major in the Army National Guard.

“I’m participating in the Dakota Access Pipeline protest because of the threat this project poses to water resources in four states serving millions of people,” Gabbard said in a statement. “Whether it’s the threat to essential water sources in this region, the lead contamination in Flint, Michigan, or the threat posed to a major Hawaii aquifer by the Red Hill fuel leak, each example underscores the vital importance of protecting our water resources.”

Illinois-based veteran, attorney, and business law professor Tyson Manker, en route to the protest camp on Friday for his second stay, explained to Sputnik News why it is so important for veterans to be active in this protest.

“Veterans have a vested interest in what's happening at Standing Rock because we all swore an oath to the Constitution that never expires,” Manker, who also ran the group Veterans for Bernie, told Sputnik News. “Something is terribly wrong when the government responds to lawful First Amendment activities with riot police in up-armored Humvees, LRADs, water cannons, rubber bullets, mace, and flash bang grenades.”

© Flickr / UN Women
Jane Fonda Serves Thanksgiving Meal to Standing Rock Water-Defenders in North Dakota
Manker explained that unprovoked state-sponsored violence against peaceful citizens is “beyond unacceptable and has no place in a civilized free democracy.” He also stated that throughout history the US Military has frequently been used as a tool to conquer and destroy Native American lands and people so that resources can be exploited.

“Our generation of post-9/11 Veterans is dedicated to forging a new era of fighting for, not against, Native people and their respective cultures,” Manker asserted. “Regardless of your position on the Dakota Access Pipeline, we should all demand an absolute adherence to protecting the free speech rights of all Americans. That is why Veterans are going to Standing Rock.”

The veteran group has vowed to stay until at least December 7.

Friday afternoon former Congressman Dennis Kucinich spoke to Eugene Puryear, host of By Any Means Necessary on Sputnik Radio, to discuss his upcoming trip to Standing Rock on Sunday.

Kucinich expressed his disappointment with US President Barack Obama’s response to the struggle.

“President Obama could intervene administratively, he could intervene through executive order, but he has stayed on the sidelines while at the same time giving lip service to the rights of Native peoples while the corporations who are building these pipelines continue to move forward,” Kucinich told Sputnik.

“America has a longstanding indifference, a maligning indifference, towards Native people, towards their rights,” Kucinich said. “This pipeline was about to go through and affect communities in Bismarck adversely, and, instead of that happening, it was sent through Indian country. This is a clear example of racism, of environmental injustice — of a historic grievance that Native peoples have towards the United States government which has lied repeatedly, and been so deceptive, and not really protected the human rights of people, let alone the civil rights people have to be able to stand up for themselves.”

The former US presidential candidate stated that stopping the pipeline is a key moment in American history, and that the Standing Rock protest will take it’s place alongside Selma, Montgomery, and Little Rock in the history of civil rights.

Kucinich also wrote a letter to US Attorney General Loretta Lynch in November to express his concerns about the force being used against protesters at Standing Rock, asking her to investigate.

“It has been reported that police, as part of a strategy of crowd control, deliberately used water cannons, in subfreezing temperatures, against protesters, subjecting protesters to risk of serious injury and depriving them of their First Amendment right of free speech, the right to protest,” Kucinich wrote. “I am requesting that you use the power of your office to investigate this incident, to determine the participants and to take such action to enjoin the offending parties from further violation of the US Constitution and applicable federal law.”

The US Army Corps of Engineers ordered protesters to leave the camp by December 5, later backtracking, and releasing a statement saying that they will not enforce the order.

North Dakota governor Jack Dalrymple asserted that the state will not forcibly remove the protesters, but issued an executive order for evacuation due to harsh winter weather. Weather.com is forecasting temperatures in Cannon Ball to fall to a frigid six degrees Fahrenheit (-14 Celsius) by next week.

Protesters stated that the Governor is not concerned with their safety after water cannons were used on demonstrators in subfreezing temperatures, leading to 17 people being hospitalized for hypothermia.

The roughly 1,200-mile Dakota Access pipeline was intended to transport 450,000 barrels of oil per day across the Missouri River. Opponents of the pipeline, including leaders of the Standing Rock Sioux Tribe, have asserted that the Energy Transfer Partners' $3.8 billion pipeline will destroy sacred sites near the tribe's reservation we well as risk poisoning the water supply of millions of people.

Over 525 Americans from many different walks of life, including prominent figures, have been arrested in North Dakota at the protest sites since August.

2,000 Veterans Arrive at Standing Rock to Give Water Protectors a Break