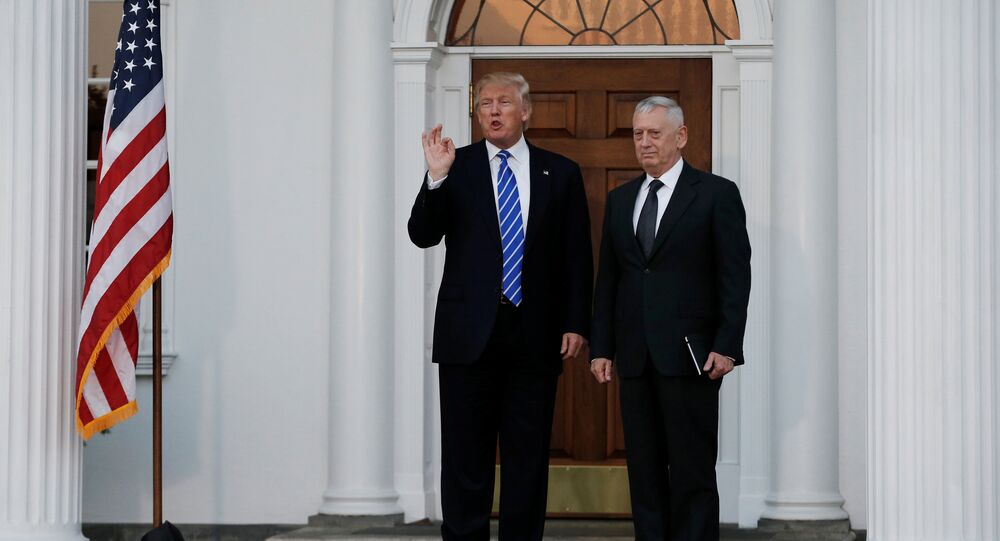 As Donald Trump confirms his pick for the next US Secretary of Defense, Sputnik has compiled a list of the most interesting facts about the country's next top military man, Gen. James Mattis, and explains why he got the nickname the "Mad Dog".

© AP Photo / Matt Dunham
Trump Confirms Upcoming Appointment of Mattis as Defense Secretary
On Thursday, US President-elect Donald Trump confirmed that Retired Marine Gen. James Mattis will be appointed as the next US defense secretary.

"We are going to appoint 'Mad Dog' Mattis as our secretary of defense," Trump announced at a rally in Cincinnati, Ohio, the first stop in his nationwide "Thank You" tour, referring to the general by a nickname.

However he jokingly asked the attendees to keep it a secret until a formal announcement on Monday.

Here are the most interesting facts about the US' next military leader.

As the president-elect referred to the next US secretary of defense by his nickname, Sputnik decided to find out where it came from.

Retired Marine Gen. James Mattis was one of four Commanders launching the US invasion of Iraq back in 2003, leading the 1st Marine Division into Baghdad.

© AP Photo / Carolyn Kaster
Joker in Trump's Deck: Next Secretary of State to Shape US-Russian Relations
He then led the Marines in Iraq’s Anbar province in 2004 and further held a variety of senior posts before spending 2010 to 2013 as the 11th commander of the US Central Command, which oversaw the wars in Iraq and Afghanistan.

According to CNN, this is where the retired Marine general earned his "Mad Dog" nickname: "after the 2004 battle of Fallujah in Iraq, where he led British and American troops against Iraqi insurgents."

The TV channel however adds that it is not the only colorful nicknamed possessed by the high-ranking serviceman. He is also being referred to as the "Warrior Monk" and "Chaos."

The "Warrior Monk" apparently because of his love of reading about military history. It also comes from the fact that Mattis is a life-long bachelor who has no children who has a singular focus on the military.

And "Chaos", is an abbreviation which stands for "Colonel Has An Outstanding Solution."

One of the Fiercest Critics of Iran

© AFP 2020 / Jewel Samad
Any Chance Hillary Clinton Could Still Move Into the White House?
According to the US media, Mattis "has spent years warning publicly and privately about the threat posed by Iran," describing Tehran as "the single most enduring threat to stability and peace" in the Middle East.

After his service in Iraq, they say, he came away with a "deeply held belief that Iran’s support for Shia militias in Iraq meant that Tehran was directly responsible for the deaths of hundreds of American troops, and that the Obama administration’s nuclear deal with Iran would help that country further expand its influence across the region."

Reports suggest that his stance that the Iranian threat extended well beyond its nuclear program has finally cost him his post in early 2013 when President Obama abruptly removed Mattis from his post.

"Neither Trump nor Mattis has explicitly called for using force against Iran, but that will be much likelier in a Trump White House than it had been in the Obama one. Mattis has wanted to confront the Iranians for years. He may get the chance," warns US-based media company Vox.

© Sputnik / Michael Klimentyev
Putin's 'Message to President-Elect Trump' Enclosed in His Annual Address
What is interesting is that Mattis's view of Russia remarkably differs from that of the president-elect. Unlike Donald Trump, he is a vocal critic of Moscow and pursues a much tougher stance toward Russia.

Back in 2015 Mattis claimed that Russia's moves "against Ukraine" were "much more severe, more serious" than Washington and the European Union were treating it.

Besides, the high-ranking serviceman sees President Putin "as a clear threat to both the US and many of Washington’s closest European allies," being deeply convinced that the Russian leader is trying to “break NATO apart.”

On the Middle East

Since retiring in 2013, Gen. Mattis has become a vocal critic of what he calls Washington’s “strategy-free” approach to warfare and threats, according to the report of The Wall Street journal.

He has urged the US to engage in the Middle East more directly and without preset limits on the use of force, echoing critics of President Barack Obama’s administration who say it has taken an "overly incremental and fair-weather approach."

© AFP 2020 / MOLLY RILEY
'Making America Great Again': How Trump's Plan Could Affect the World
But what the retired Marine General has really become famous for, is a chain of his colorful quotes, among which are:

"I come in peace. I didn’t bring artillery. But I’m pleading with you, with tears in my eyes: If you f--- with me, I’ll kill you all," said at the first of a series of meetings with Iraqi military officers in 2003.

"Be polite, be professional, but have a plan to kill everybody you meet," his advice to US Marines when they arrived in Iraq in 2003.

"There is nothing better than getting shot at and missed. It’s really great," is another of his sayings.

Interestingly enough, for James Mattis to take his post, Congress will need to change US legislation. The US law requires a veteran to be out of uniform for seven years to qualify for a civilian post. Gen. Mattis only retired 3.5 years ago, hence Congress needs to issue special permission granting the president-elect the right to nominate him.

The only other recently retired general to become secretary of defense since the position’s creation after World War II was George C. Marshall. In this case, Congress passed a law to permit his appointment.

Trump Narrows Down US Secretary of State Choice to Four Candidates