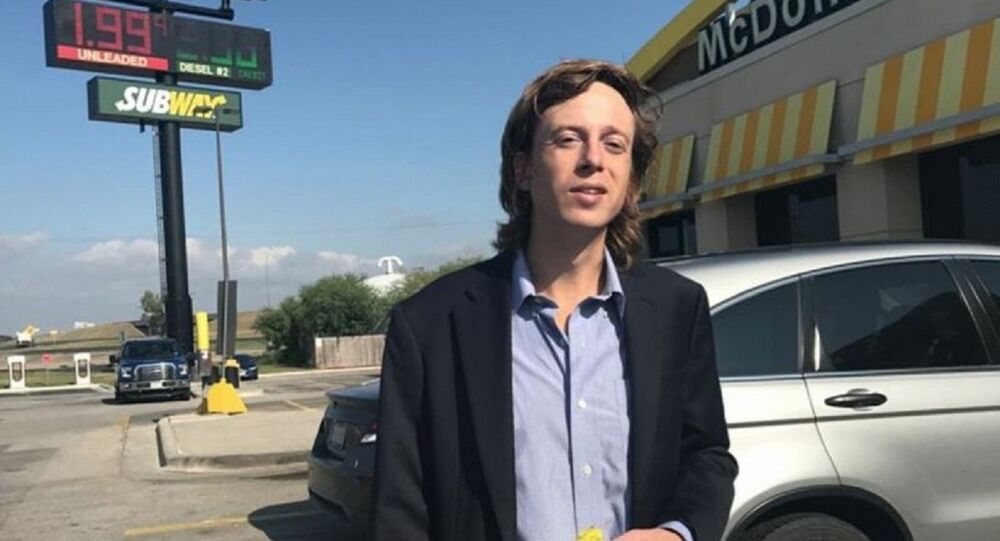 Award-winning journalist Barrett Brown was released from a Texas federal prison on Tuesday after spending over four years behind bars. On Thursday, he joined Sputnik Radio’s Eugene Puryear host of By Any Means Necessary for his first interview since his release.

© Photo : Wikipedia
US Journalist Barrett Brown Released From Federal Prison
Brown, 35, who was once the most public face of Anonymous, was indicted in December 2012 on multiple charges including sharing a link to hacked material from intelligence firm Stratfor.

Many of the charges were dropped, including identity theft, possession of stolen credit card numbers, and, most famously, a charge for sharing a hyperlink.

Brown’s arrest sent shivers through the global journalism community, as many reporters depend on digging through hacked or illegally-obtained content for information.

In January 2015, Brown was convicted after accepting a plea deal, admitting guilt on the charges of transmitting a threat in interstate commerce, interfering with the execution of a search warrant, and being an accessory after the fact in an unauthorized access to a protected computer.

Appearing on By Any Means Necessary on Sputnik Radio, Brown discussed how important it is for activists and journalists to be able to freely share and disseminate information.

“My concerns were already pretty much information related. You're always going to have a degree of fundamental problems related to how we’re governed but, governing that, the fundamentals of that, is always the information flow,” Brown said. “While the problems are different, the solutions I think are still the same.”

“Obviously I was involved in some of the more unconventional efforts,” Brown noted.

Brown compared his time with Anonymous to activists who broke into an FBI building in Philadelphia suburb in 1971, stealing every document inside to prove the extensive spying and dirty tactics being used on anti-war activist groups.

“They had to commit crimes to expose the FBI’s crimes,” he said. “And they were right to do so. We wouldn’t have known about Martin Luther King receiving these bizarre communications from J. Edgar Hoover if it wasn’t for that operation.”

Brown explained that there has never been a major release of information on government crimes that did not involve a whistleblower having to commit a crime to obtain it.

© CC BY 2.0 / Jacob Davis
'Operation ISIS': Anonymous Calls on World to Troll 'Daeshbags'
The conversation turned to Donald Trump’s transition team and to Peter Thiel, one of Trump’s picks, and the founder of secretive big-data intelligence company Palantir.

“Peter Thiel is one of the most dangerous men alive today,” Brown asserted.

The journalist detailed that Theil’s notoriety is due, in part, because the latter is “totally amoral,” and “capable,” as well, as because he had integrated himself with the previous administration and has done so again with Trump.

“No matter what the election results were going to be, Peter Thiel was going to continue to increase his viability to achieve whatever bizarre long range plans he has,” Brown said.

Brown stated that one of the dangers represented by Thiel is that many find him hard to take seriously when he and other high-tech billionaires are talking about their cypherpunk/science fiction sounding plans. The journalist explained that though the pie-in-the-sky tech dreams of the billionaires are often taken lightly, Thiel and others have extremely alarming capabilities when it comes to information and technology.

© Flickr / Public Citizen
FBI Violates Own Rules by Spying on Anti-Keystone Pipeline Activists
Brown stated that, no matter who is elected, people cannot be stopped from dealing in intelligence, as all it takes are five or six intelligent people to create something “rather spectacular” online. He said that if there is money to be made and power to be gained, it will happen, citing Thiel as living proof.

“Let’s say we elected Jill Stein tomorrow, or we elected the Libertarian Party — and they said we are tired of the CIA and the privatized intelligence sector, there's nothing they can do about it because there are a thousand companies out there, even aside from the large ones like Booz Allen Hamilton,” he said.

Brown spoke about his imprisonment, saying that he spent approximately six months out of his four years in solitary confinement, with the longest stretch of time being two months.

“It reaches the point where you really have to wonder about the whole institution that has allowed these things in the first place, an institution in which the President a few months ago had to intervene and say that we can’t put children in solitary anymore. The fact that he had to do that I think, is indicative of this society.”

“It’s why I personally have no real interest in participating in nations, whether it be this one or any other, I don't want to have any kind of moral connection, political connection, to a population that allows that kind of thing.”

Brown may be free, but he has been ordered to pay nearly $900,000 in restitution to Stratfor, and tens of thousands to other companies who claim to have been impacted by the breach.