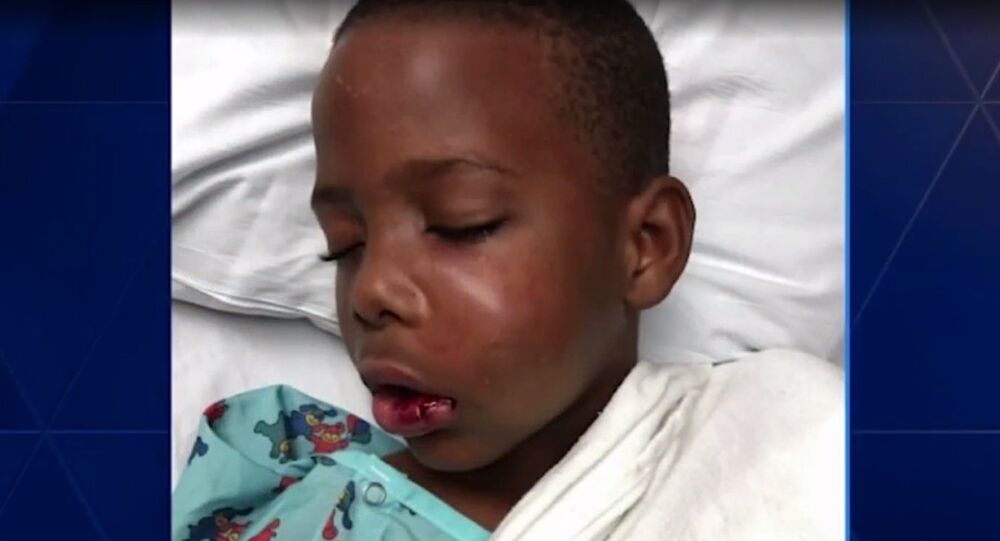 A young child has been hospitalized after a being beaten by a teacher at an East Baltimore elementary school.

On Monday, November 28, Trayvon Grayson, a seven-year-old child, was hospitalized with a shattered jaw, two missing teeth and a third molar pushed into his gums. The child said that his injuries were inflicted by a tutor, 25-year-old Timothy Randall Korr. At the time Korr was an employee of the Baltimore Curriculum Project, a nonprofit organization which dispatches tutors to four charter schools in East Baltimore. The child attends one of these schools, City Springs Elementary/Middle School.

The child’s mother, Lateekqua Jackson, contacted the Baltimore City police who began a child-abuse investigation. During the course of the ongoing investigation, they discovered footage of the disturbing incident, which they say will not be released to the public.

T.J. Smith, chief spokesman for the Baltimore Police, held a press conference to address the case. WBAL-TV reported his statements: "The video does show him carrying the child and slamming him up against the wall, and it’s very difficult to watch. We cringed a number of times as we watched the video." Smith’s disgust with Korr’s actions was palpable. In the same statement, Smith said, "[the video] showed an assault, and it showed this seven-year-old boy in school being slammed about by this 25-year-old man, and I'm being nice by calling him a 25-year-old man."

Korr initially claimed that he was removing the child from class for being disruptive, and had to physically carry him to the principal’s office. It was at this point that Korr, according to his version of events, lost his footing and dropped the child, leading to his injuries. Korr’s story did not satisfy investigators as the tutor was arrested Tuesday, and on Wednesday was formally charged with first- and second-degree child abuse, first- and second-degree assault, reckless endangerment and neglect of a minor. If found guilty on all counts, he could face up to 85 years in prison.

Baltimore-based Kurt Nachtman, Korr’s defense attorney, claimed during the bail hearing on Thursday that Korr was told that Trayvon was armed with a BB gun and that he was refusing to cooperate during dismissal. When Korr picked up the child, according to Nachtman, the boy scratched and kicked him.

The judge questioned why neither the BB gun nor the resistance was mentioned by Korr previously, and refused to lower the $250,000 bail amount. Police claim the video is decisive evidence that Korr had malicious intent towards Trayvon.

The child has been released from the hospital, but his mother says his injuries are primarily mental. FOX-45 took a statement from Lateekqua: "When he’s asleep he twitches in his sleep and jumps. He wakes up screaming saying a man tried to throw him into a wall, that's traumatizing."

Baltimore Man Jailed for Five Years Over Arson During 2015 Riots